Thoughts on the Turkey Video with dual EBEs visible

It's been discussed many times over the years , for me the explanation that it's actually a cruise ship in the distance is the most likely explanation. 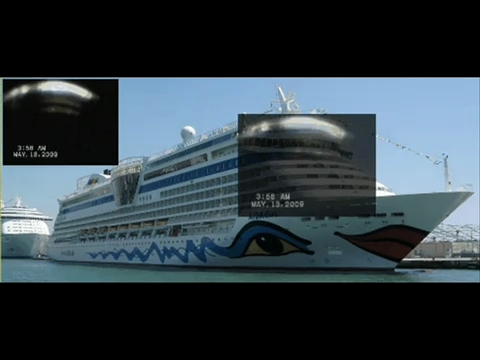 I agree, but who are the ebe looking dudes if thats the case? Ship's captain and crew?

Excellent. That looks like a hoax from the comparison. Two posed as a Grey on the bridge deck? However, there are some distinct differences in scale and reflection off the structure between what is captured and the cruise ship - from what I see. Thanks!

Definitely predators. I watched that film again the other night and the one on the right is a dead ringer with those locks

—-Get to the chopper—

I think the alien-looking things appeared after the images were "processed" by someone, but I'm not sure.

Also, any object filmed with a light behind it and not on focus will appear with a deformed shape, as if the edges were eroded by the light coming from behind it.


That is no cruise ship imo.

originally posted by: play4keeps
If this has been discussed in the past, I apologize. I am not a videographer, but it seems legit.

It's not a UFO and they aren't EBE's

In that thread you can see reflections of the same two things in three images taken over the course of a year, and they don't look like aliens in the other images.

That is no cruise ship imo.


The four orange lights are interesting, but they still could easily be lights on the mast of a sailboat. We can't even tell if it's flying or whether it's just at the water level. They don't do any of the observables that would make this potentially a UFO.

1. Unusual high speed or instant acceleration.
2. Rapid movements or changes in direction at sharp angles.
3. Significant change in the shape of the object not associated with perspective change.
4. Trans-medium travel.
5. No visible means of propulsion (this one is too far away to tell).
6. Low observability - shows up on radar or IR but not visually, or vice-versa (nobody getting it on radar IFAIK).
edit on 17-8-2021 by Blue Shift because: (no reason given)

posted on Sep, 19 2021 @ 01:39 AM
link
My 2 cents worth on this controversy is that I have skimmed all 5 pages of the debunk website pages…much of it was cruise ship, landmarks, bangle jewelry and camera lens characteristics……debating and comparisons.

One of the contentions have been that the object is basically in the same position in 2009 as it was in 2008. How could this be?

One thing I have not seen pointed at (although I could have read past it or wasn’t worth noting by anyone else) and mentioned, was that it appears to me that two different cameras were used. If that’s the case, then it is plausible what was being captured was in about same position. Perhaps by using one model of camera for 2008 and another model of camera in 2009.

Dates and time stamps can be fiddled with………but the displayed layout formatting cannot, at least for a majority of cameras, imo. Alpha Numeric character formatting is programmed by the mfg's into the firmware of the cameras. Shown below is an example……also notice that the point size and font sizes of AM i.e. are different.

Now….I don’t know what this object is, but the next question is….how could it be in the same position from one year to the next?

There is no way to tell what the atmospheric or subspheric conditions are of where the object is seen to be located. Conditions such as EMF or auto wormhole coordinates to appear from, etc.

But since anything is possible on ATS…..it could be a residual sighting event!

Borrowing from the paranormal hauntings and sightings, why not borrow the same idea and apply it in theory for this objects appearance? (not saying it’s a ghost or spirit)

I’m just throwing that out there……

Below is an explanation of Residual’s in the world of the paranormal:

Thanks for the new possibility.

One thing that bothers me is that most people stick to the explanation their preconceived ideas prefer and ignore all other possibilities, so it's always nice to see a new possibility appearing on the discussion.

PS: what does "subspheric" mean?

Well subspherical means "almost but not quite a sphere".
In his post i have no idea what he's using the term for

PS: what does "subspheric" mean?

A made up one word denoting and encompassing, all global (spheric from spherical) types of natural large bodies of water densities underneath (sub) the curved surface of the earth….. i.e. oceans, seas, etc.. combined.

That’s my own definition and I’m sticking to it

In the context of subspheric conditions……those could be strange anomalies underwater that may be of interest to possible aliens i.e. vortex’s, magnetic fields, hydropower currents and the such.

Yeah those lights were interesting.