Vaccination: The Mark of the Beast?

posted on Aug, 15 2021 @ 02:00 PM
link
People have been talking about the "Mark of the Beast" for as long as i can remember, but i'm not sure if it's been mentioned here, during this specific time in human history. I know many believed it would be some kind of microchip inserted into the hand or maybe even a tattoo, but i'd have to disagree based on the numerical codes. The vaccination is an identical match to the words written in the book of Revelation. 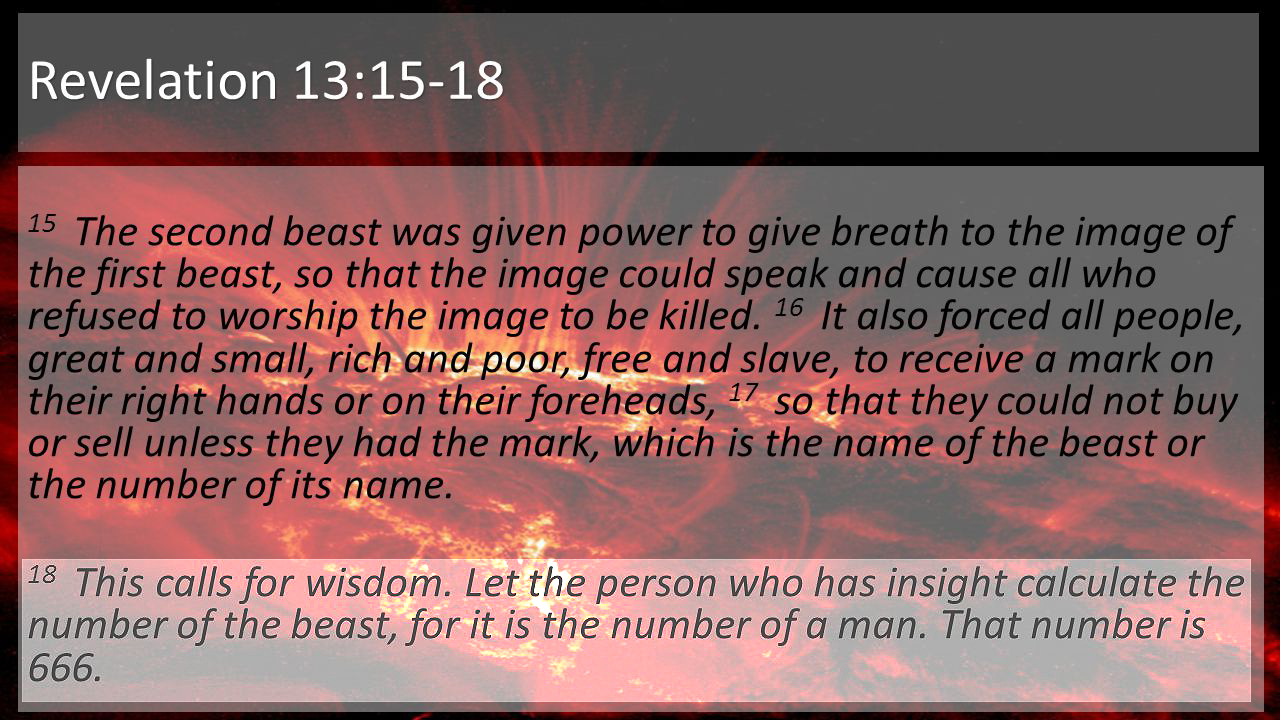 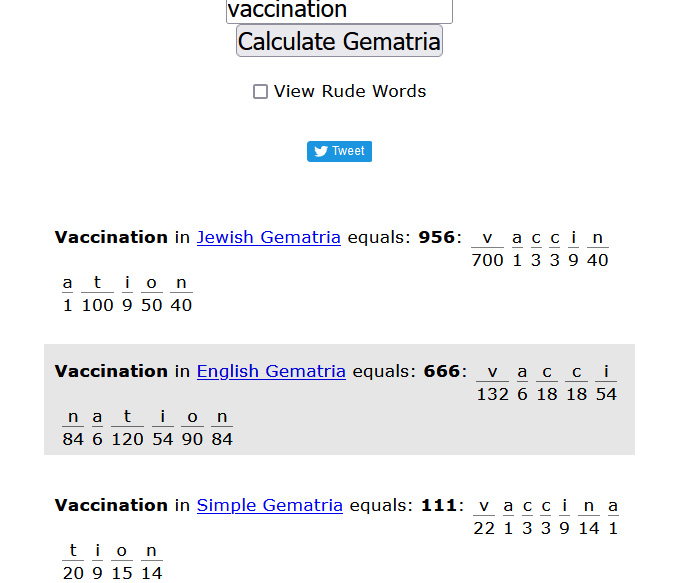 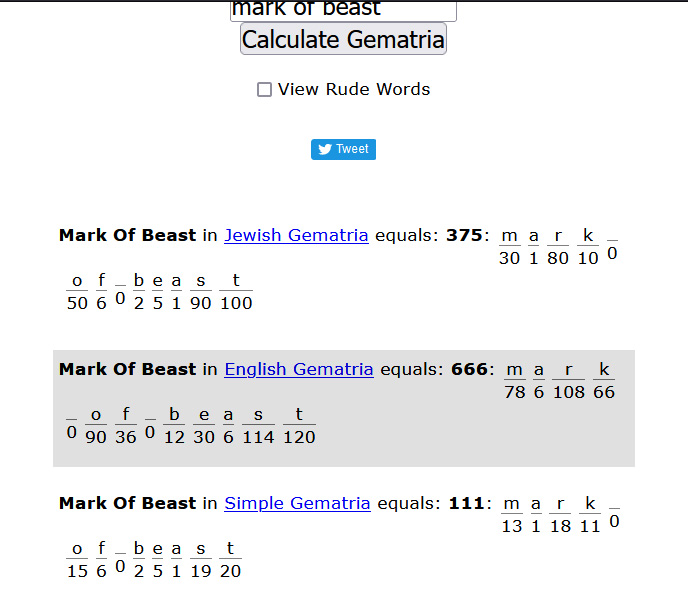 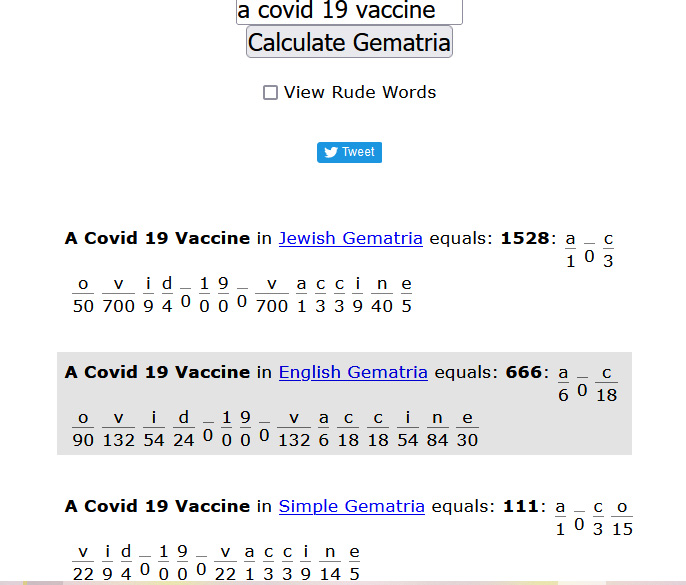 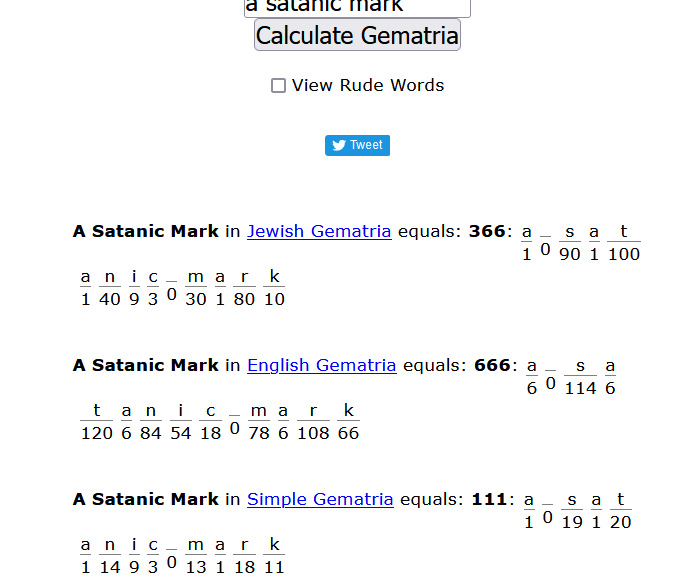 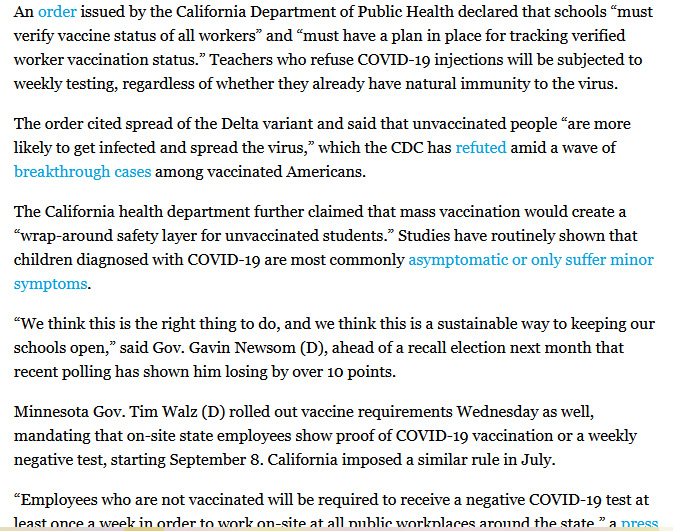 Here's a few other words that have a 666 connection:
Mandatory, Computer, Dark Matter, Beast is real, Joe Biden Beast and New York.

If this isn't that appointed time, please share your theory as to why not?

The Mark of the COVID

I wanted to come on here & make a thread about the UK series from 2013 named Utopia, which was remade (badly) by Amazon in 2019. Then I saw this thread & thought the timing was odd!

No, the concept of this thread (numerology) was not addressed in the OP of the thread you linked. The thread you linked was pretty standard prophecy fare connected to the 'mark in the right hand or in the forehead'. This is a much more specific thread detailing interesting numerology which exists in the English language (most dominant Western language, second most popular worldwide after Mandarin)

There is a case to answer with this OP theory. Why does the gematria fit so perfectly, in more than one or two examples?

posted on Aug, 15 2021 @ 02:14 PM
link
a reply to: DaBoogieMan
I did a very relevant thread myself in December- Revelation, pandemic, vaccination
But that argues against identifying the mark of the beast in present events.

In my main series of thread on Revelation, I also included a post (I think) on the uselessness of gematria. I must track that down. Give me a moment.

We can't, unfortunately, work "forwards" from the number itself; we get nothing useful from the letters which represent the number 666.
So that's where the "calculation" comes in- the practice of Gematria. Choosing a possible name and working backwards from it, turning the letters into numbers and trying to make them add up to 666.

Our real difficulty, in practice, is that the "target number" of 666 can be reached only too easily, giving us multiple solutions.

If we limit the field to the people, and especially the Emperors, who would have been around in John's time, then the choice is manageable.

Nero seems to be the clear favourite amongst scholars. Apparently his name works equally well (in different forms) for 666 and for the variant reading "616"- which might be the explanation for the other reading...

But once we bring in later candidates, the ambiguity of the process becomes much more problematic. Even if we knew (as we don't know) that the Beast belonged to our own generation instead of some future generation, the choice would still be overwhelming. I can find even on one site the calculation being applied to Bush, to Obama, to Arnold Schwarzeneggar, and to Georges Papandreou.

Furthermore, the fact that people are starting from their expected conclusion and working backwards from it gives them a strong temptation to "fudge" the calculation. The most obvious method is to tinker with the name of the chosen candidate, until they find the form which best suits their purposes. Leaving out two letters of Buonaparte. Giving his middle initial to "George W.Bush" and taking it away from "Bill Gates III". Allowing "Charles, Prince of Wales" to have only one of his titles.

The result is that we've got no reason to feel confidence in any of these conclusions.
The process which purports to identify the Beast for us cannot, in fact, identify him with any certainty.

As far as I'm concerned, there's also something problematic about the basic assumption, that God would choose this way to address the later church.

It was a fairly natural way to communicate with the church of John's time. They were using letters to represent numbers as a matter of course, and a code based on the fact would not be obscure to them- no more obscure than a code based on acronyms would be to us ("...and there was a great king in the West called UKUSANATO...").

It is NOT a natural way to communicate with the church of later generations. We don't use letters to represent numbers, in daily life, which means that we've lost the ability to make sense of Gematria. The technique is kept alive for code-breaking purposes, but it's not a language understood by the people at large.

"In many and various ways God spoke of old to our fathers..."- Hebrews ch1 v1
My understanding of the Biblical God is that he is a God who wants to communicate.
Which means that he would want his meaning to be reasonably accessible.
I find it difficult to believe that he would deliberately send a message to the later church in a form which nobody would be able to read, leaving his meaning to be uncovered by code-breakers.

Incidentally, this is not just about Gematria. The same objection applies to each and every interpretation which involves finding 666 in "hidden" places.

So what we need is a way to interpret "666" which would be reasonably accessible to the church at large- including, ideally, those who were around when the book was first written.

I can offer three suggestions, all of which point in approximately the same direction.

One option is to apply the Gematria calculation in the usual way, limiting the field to the candidates known to the original church. We can then regard the identified man as a model for the later Beast. This keeps us obedient to the instruction to "calculate" the number, and it liberates us from the thankless task of disentangling all the other claims...

"Internet" and "World Wide Web" do too.

posted on Aug, 15 2021 @ 02:44 PM
link
I like to simplify the concept. If there is any "mark" or something internal that is required to buy/sell, then it is connected to the mark of the beast. Whether a precursor or actually it.

posted on Aug, 15 2021 @ 04:39 PM
link
Mark of the Beast" A reference to a symbol from the biblical Book of Revelations showing allegiance to Satan

OP I know this isn't R&R and I'm not going to break the rules. But honestly your thread pretty much suggests that all vaccinated people are now under control of the Devil. It doesn't irk me in a religious sort of way but more so because you're theory is pretty over bearing. I'm Vacced fully, but I'd never suggest that those that are not vaxed bear the number of the beast. (Yes, if I wanted to I could twist the meaning of those words and do that, it's all theory, after all)

What do you morally want to achieve by accusing millions of us that we're not only taken by Satan, but in league with him?
I strongly object to your theory, in a debate sort of way : ) ..and I think many good (and also very religious folks around the world would as well.
Again, not a rant, but seriously it's somewhat shady coming from anyone who claims they love Jesus.

originally posted by: shasta9600
I like to simplify the concept. If there is any "mark" or something internal that is required to buy/sell, then it is connected to the mark of the beast. Whether a precursor or actually it.

You're thinking too much into it.

Some of us just don't want to take any chances with an under tested concoction promoted by big pharma and dodgy government.

Whether you believe the Bible or not, it's a fair warning to remain skeptical of the beast which if you haven't figured out yet, is world government.

Well, since I've already received the mark of the beast in all of it's various forms "revealed" in my life time, why should I quit now?

probably many more that someone figured out but didn't inform me of.

I don't have my shot record with me because I lost it in Taiwan, but I've had about 20 or so vaccinations, and now two more.

I'm already resigned to the fact that I am doomed to death. What more can the god put me through? Can't he give simple nobody mortals a break?

People do a search and then cherry pick the words/phrases that confirm their bias.

It's not even a chip anymore.

It's an advanced barcode that people must scan with their smartphones to gain access to amenities and facilities.

I see it being introduced everywhere but casually, for now...

They call it Track and Trace in the UK.

This isn't going away.

No this is not the mark. This is conditioning and weeding out those
who will not comply. The mark can't be rolled out until after the
"Man of sin" is revealed. Antichrist what have you? There is some
specific chronological order to the events in Rev.

But every word will have occurred before it's all said and done.

posted on Aug, 15 2021 @ 05:59 PM
link
I would rather say that this is a test. Because this vaccine hysteria is turning into something that can resemble this prophesy.

What we see and experiance today will be studied by some. And perfected by others.

I'm already resigned to the fact that I am doomed to death. What more can the god put me through? Can't he give simple nobody mortals a break?

He gave us all a break in Christ Jesus.
It's the only break we can expect or actually need.