COVID still isn't the villain when it comes to putting kids in the hospitals. Sure, we've all seen the scare stories about how children's hospitals are "overwhelmed" and kids there have COVID, but it's not the main issue doctors are seeing.

COVID-19 cases among children are rising because of the Delta variant, but according to health officials, it’s not the main illness sending kids to the hospital right now.

Medical Director of Pediatric Inpatient Hospital Medicine at Stormont Vail Health Dr. Fouad Medlej says while they have had some kids sick with COVID, what’s mostly sending them to his floor is RSV and Rhinovirus. They’re both respiratory illnesses typically found in kids younger than 2 years old.

Dr. Medlej said both respiratory illnesses get transferred through droplets and touch, and in a typical year, their season starts in November and ends in April. But this year, he’s seeing a surge in pediatric cases months ahead of what they’re used to.

So while there are a surge of children's hospitalizations, it's the regular seasonal bugs we're seeing out of season, not mainly COVID that has the children's hospitals full. These kids have a cold (that's what rhinovirus is) or RSV, another mild cold. In very young kids without developed immune systems, these diseases can cause the need for hospitalization because their young systems don't know what to do with these bugs yet.

Truthfully, COVID is the lesser villains in all this.

According to the American Academy of Pediatrics and The Children’s Hospital Association:

4,292,120 children across the U.S. have gotten sick with COVID; that’s roughly 14 percent of all cases.
Out of those numbers, .1 percent – 1.9 percent of child cases resulted in hospitalization.
0 percent to 0.03 percent resulted in a child’s death.
Health organizations that contributed to the studies, categorized a “child” as someone ranging from 0 to 20 years old.
Dr. Medlej said he’s not brushing off COVID but believes it’s important people know it’s not the only respiratory illness out there right now resulting in hospitalizations.

“We have to address the seasonal viruses. mostly RSV because that’s the one that in kids aged two years and below is the big troublemaker,” Dr. Medlej said.

There are some numbers there about COVID in kids, and for the purposes of these numbers, we're talking about individuals ranging from 0 to 20 years of age. COVID still is not a serious threat to them.

This one is actually pretty simple. Usually these things are spaced out across an entire year, but kids have been cooped up at home for the last 9 months and are just starting to interact again, so you get an explosion now rather than a steady feed throughout the year.

Imagine that in a normal year we have 2-3 peaceful protests by BLM a week, so maybe 300-400 businesses are burned to the ground over the space of a year. We can let that slide, it's just part of living in a diverse society.

Now imagine that all of those protestors were in jail for skipping out on their child support or whatever, and they all got out on the same day and held a massive protest that compressed all of that peaceful protesting into a short period of time. Suddenly we'd have 300-400 businesses burned to the ground in a couple of days and it would seem like some kind of massive problem when in reality it is the same regular problem but shorter and more dramatic.

There are some numbers there about COVID in kids, and for the purposes of these numbers, we're talking about individuals ranging from 0 to 20 years of age. COVID still is not a serious threat to them.

Operation Mockingbird is in full effect to scare the people and cast the states standing up for freedom like Texas and Florida.

This correction is all you need to know about the manipulation that has happened with every single aspect of this plannedemic. 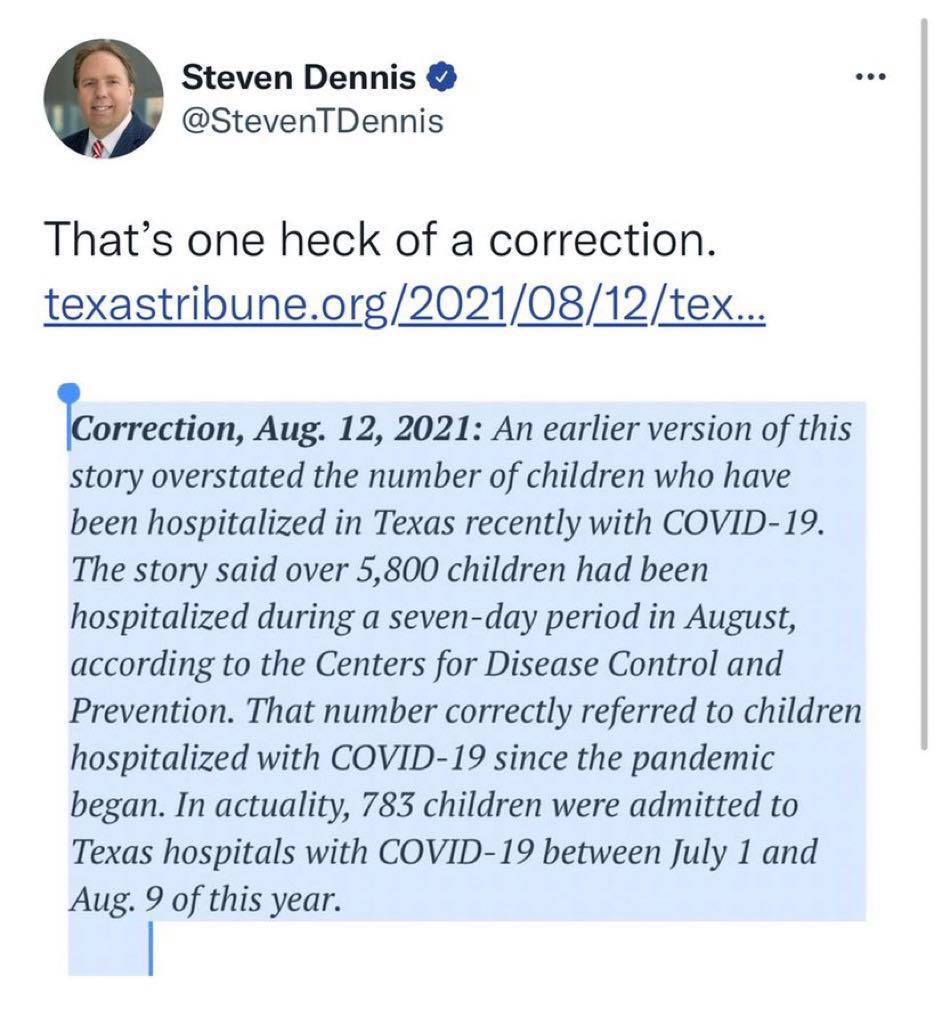 RSV is hitting the little ones hard this year as well. Of course, the symptoms are almost identical to covid.

WHAT TO KNOW ABOUT THE CURRENT RSV EPIDEMIC


Respiratory syncytial virus (RSV) is a common pediatric virus that can cause serious respiratory illnesses in babies and children. Older kids and adults can get a bad cold from RSV, but in our smaller patients, RSV can infect the lungs, causing fever, wheezing and cough. This clinical syndrome is known as “bronchiolitis.”

In a normal year, pediatricians are used to seeing RSV cases spread in the community from October through March. The old adage is, “The fair brings it to town,” because it seems to show up right around the time of the Mississippi State Fair each fall. But this year we’ve all had to adjust to expecting the unexpected as far as infectious illness is concerned and cases of RSV started popping up in our clinics in April. As we’ve rolled into the summer, we’ve seen more and more of it at Children’s Medical Group.

I hate to say it, but I predicted a scenario like this. Obviously I don't know for sure that this is another man-made virus, but it stands to reason that if they could make the first one, the second and X^n will be easier as time goes by. We are at the point where we don't need "Giant Asteroid," a local supernova or singularity to create an ELE. We can do it ourselves using CRISPR in a garage.

If the "not-a-vaccines" was not taken through coercion and extortion, the PTB would release a real virus. If you can't kill off the population using fear to drive them to the lethal injection, then just kill them off period and clean up the bodies later. I know how these psychopaths work, I worked for them overseas when I was with the military and CI. I just don't understand why the medical community and specifically psychiatrists are not pointing out the elephant in the room. How much blood do they need on their hands?

We are dealing with evil, true evil. Daemons bearing gifts, much like Childhood's End in a sense, all the promise of a golden age, take the kids, destroy the world.

Yes, the fake press, etc. are deliberately slandering Texas and Florida because these states REFUSE to bend the knee to a mandate of the experimental covid vaccine and fake, UNTESTED mask mandates.

We are witnessing the Biggest Sting of the Century.

And those involved in the covid fraud, election fraud and mask mandates are IN A PANIC.

They are constantly having to defend their lie-positions now and one by one they are dropping.

Nasty Arizona Senator Navarrette was arrested for sex crimes wth a minor. He had voted for sex ed for 4 year olds.

One by one... so that the PUBLIC can see their crimes against Humanity....

I agree across the board!

Nasty Arizona Senator Navarrette was arrested for sex crimes wth a minor. He had voted for sex ed for 4 year olds.

Tip of the iceberg, he was the new up an comer, AOC and the squad love this pedo.


That ain't a correction. That is basically admitting the original story was BS from the start.


That ain't a correction. That is basically admitting the original story was BS from the start.


Aye, enemy of the people is putting it lightly.

That was a great analogy Aaargh! I rarely get a good chuckle like that example. I wish I could star that some more.
edit on 14-8-2021 by MichiganSwampBuck because: Corrections

posted on Aug, 14 2021 @ 05:48 PM
link
a reply to: ketsuko
I have to question everything medical these days. For example, here's a video where the guy says he's paralyzed from the vaccine and is now "5 days in the hospital". Yet, he's still wearing his civilian clothing:

stateofthenation.co...
I think that they are trying to get people to rebel. They need the camps in operation, and they're going to use a false flag to set it up. Reminiscent of the phony Jan 6 stunt, where they set the event up prior. Watch out for the scheme.
edit on 14-8-2021 by Wisenox because: (no reason given)

I asked my daughter about children and covid, she said that is been a lot of kids brought by the parents because they are sick and think is covid, but they test negative and they are treated for common cold.

In the area where she lives is not children in hospitals, even when the hospital is been full with sick covid adults.

Still covid is not a danger to children.