posted on Aug, 10 2021 @ 10:49 PM
link
Just thought we'd take a trip down memory lane. Back to 2015 when current President, then Vice President, trusted the 'science' and personally gave his support to Theranos after a tour of Theranos' state of the art labs.

Yes Joe Biden, after a tour of the totally fraudulent global scam facility that was Theranos. called it the laboratory of the future and it sure got him inspired man.

I guess it's just too bad the laboratory was actually an elaborate scam. 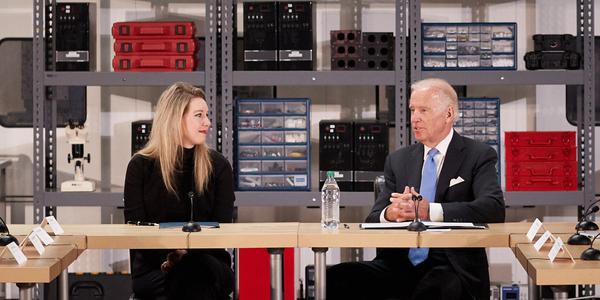 The Silicon Valley-based blood testing company aims to market its tests, which only require a fingerprick's worth of blood, directly to consumers as well as influential insurance organizations, doctors, the government, and pharmacies.

Joe Biden provided a personal endorsement for the futuristic blood testing firm Theranos (Palo Alto, CA) in a visit to the firm's manufacturing facilities Thursday. Biden, whose eldest son Beau recently died from brain cancer, said that his family had "been a big consumer of healthcare" and that the healthcare system must change to become more empowering for patients.

Theranos, whose blood tests cost a fraction of traditional tests, represents the future, Biden said. "You are empowering people whether they live in a barrio or a mansion and allowing them to take control of their healthcare. The president and I share your vision that healthcare in the future will be based on preventive care."

"Talk about being insipired! This is inspiration, man," Biden quipped.

"This is the laboratory of the future," he said, contrasting it with traditional lab testing, which he described as "expensive, inconvenient, and disruptive to work schedules." "They are painful and bring discomfort," the Vice President added. "And a lot of people have phobias of needles." 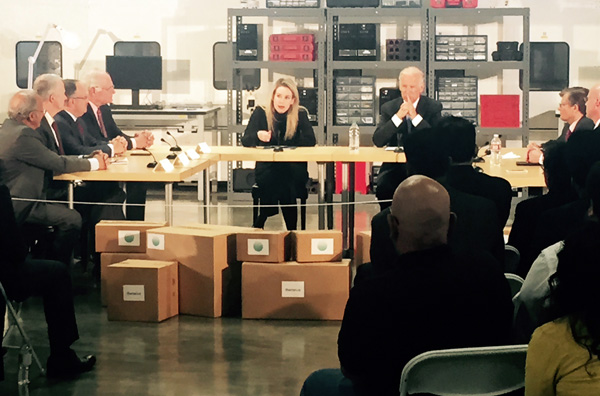 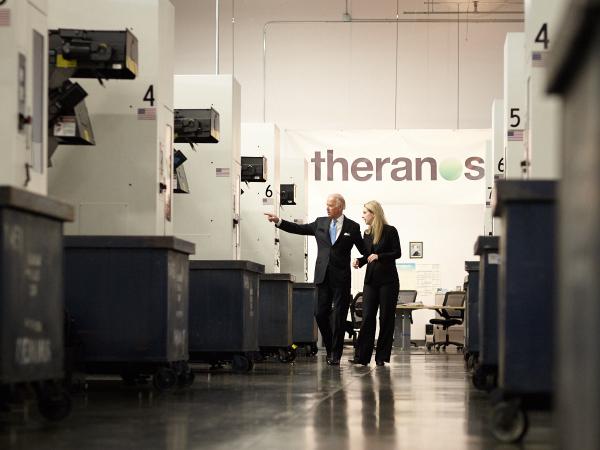 Theranos Inc., a consumer healthcare technology startup, was once valued at $10 billion, and its leadership claimed it would revolutionize the blood-testing industry.

Based largely on the company's claims, Theranos reportedly raised roughly $724 million of capital from venture capitalists and private investors.

The technological breakthrough that CEO Elizabeth Holmes and former company president Ramesh Balwani touted was never demonstrated, and the assertions of Holmes and Balwani amounted to outright deceit.

The SEC charged Theranos, its founder and CEO Elizabeth Holmes, and its former President Ramesh "Sunny" Balwani with fraud.

Holmes lost control of the company, returned millions of shares, and was barred from serving as an officer or director of a public company for 10 years.

Theranos started shutting down its clinical labs and wellness centers in late 2016, finally ceasing operations in September of 2018.

By June 2016, Elizabeth Holmes' net worth reportedly dropped from $4.5 billion to nothing.

I remember the vampire fraudster with fake demonic male voice (skip to 20 min mark), but did not know Biden toured the facility. I guess that's par for the course in this clown world of high stakes corruption. I heard she recently had a baby. WTF?!

Whistleblower Ian Gibbons (biochemist), Theranos' chief scientist who committed suicide in 2013.
Whistleblower Tyler Shultz was a Theranos employee from 2013 to 2014 and the grandson of then Theranos director, former U.S. Secretary of State George P. Shultz!!

I think Theranos was really about building a blood and DNA database of everyone given the board power players.

posted on Aug, 10 2021 @ 11:22 PM
link
Shows how fraudulent SillyCon Valley is... if you have the right connections you can raise billions to start bullsh*t companies. The end goal is always the exit strategy (going public) to cash in your billions and move on to the next half assed business plan.

Lmao, how many bridges has Biden bought?

originally posted by: visitedbythem
When she held up the tiny vial for blood, she did the 666 hand sign. There is more to this then meets the eye

No doubt she was spirit cooking that # up with AM.

Mostly they are on the left, but, you have to watch both sides. The left is absolutely loaded to the gills with Satanists

Lmao, how many bridges has Biden bought?

The question is "How many bridges have bought Biden?"

i'm gonna have to give the demented ignorant sob a pass on this one.

she blew smoke up a lot of peoples a@@ for quite a while even had some "experts" fooled.

Yeah it was pretty ridiculous. They sure #ing stepped down on her though. Imagine if other corporate shills were actually punished for their bull# the way she was?

All it proved was, don't scam the wrong people or you're #ed.