Here's an interesting little article for you all to ponder, hosted on Yahoo News, though from the Washington Examiner originally.

With bureaucrats constantly shifting the COVID-19 goalposts, civil disobedience may be a compelling, final option.

It’s been 511 days since President Donald Trump first implored people to “slow the spread” of COVID-19. In early 2020, the United States faced its first surge in cases, hospitalizations, and deaths. Very little was known of this novel coronavirus. So, working remotely, attending Zoom school, and staying home seemed like a reasonable sacrifice to keep our hospital systems afloat.

A significant portion of the public is opposed to the possibility of new restrictions. A recent Gallup poll found only 57% of K-12 parents support requiring masks for students in schools, and 47% favor requiring high school students to get vaccinated. And though a Morning Consult poll found 76% of Democrats and 46% of independents supported vaccine mandates, 39% of independents and 49% of Republicans were opposed.

At this point, there is little reason why pandemic-era restrictions ought to be reimposed. With effective therapeutics and vaccines, our country is in a much better position in the fight against COVID-19 than last March. There is little reason to impose further mandates, restrictions, or shutdowns. If anything, these measures should be met with peaceful resistance.

“Do I sound fed up to you? That’s because I am,” Paul emphasized in his speech. And a good portion of America is frustrated, too.

Bolding and underlining are mine. This is on the freaking front page of Yahoo News, people. Part of me wants to think 'Yesss! Our time to finally be heard!", but that's abruptly halted by the sneaking feeling of, "Who the hell is trying to stir the #-pot?"

Maybe I'm too damn pessimistic at heart, but I can see this being ripe for coattail-riding extremist/pot-stirring abuse.

Does, not really giving the slightest # about any of this and doing pretty much the bare minimum I have to do to ensure no business gets #ed by government bull# while doing not the slightest thing more count?

I've violated the new provincial mandates literally every day since June 1st by not wearing a mask despite not being vaccinated, does this count?

My mask has always consisted of a see through dollar store bandanna that is basically the minimum I could possibly do to comply with laws that wouldn't punish me but other people if I outright disobeyed them, does this count?
edit on 9/8/2021 by dug88 because: (no reason given)

posted on Aug, 9 2021 @ 05:33 PM
link
I want lockdowns to return. Not for Covid but to get people that have no business behind the wheel of a car off the roads. I’m selfish like that. But pretty sure vehicle deaths and crashes went down significantly during the first part of the lockdowns until people started roaming around again due to cabin fever.

Don’t even need a vax, just need to have forced driving schools with stricter pass/fail requirements. Getting people on the Smith System would be a huge improvement.

posted on Aug, 9 2021 @ 05:45 PM
link
I don't know Dug, I also thought that they framed "defiance" more than a little ambiguously.
Maybe the idea, if positive and not manipulative, isn't to tell you exactly what to protest via doing, but to think of your own ways? If so, you're probably on the right track at least.

originally posted by: Ahabstar
I want lockdowns to return. Not for Covid but to get people that have no business behind the wheel of a car off the roads. I’m selfish like that. But pretty sure vehicle deaths and crashes went down significantly during the first part of the lockdowns until people started roaming around again due to cabin fever.

Don’t even need a vax, just need to have forced driving schools with stricter pass/fail requirements. Getting people on the Smith System would be a huge improvement.

I gotta admit, with as lousy as MI drivers are up here, and as bad as they've managed to further become since the start (no joke, less accidents, but more dead automobile occupants) it's certainly appealing.

But so is bolting half the country's domicile ingress/egress points shut to prove a point if certain drumbeats continue. The world would be a much quieter, brighter place if all the Karens & Kevins had to yell at was their reflections

Fortunately we are very well armed. 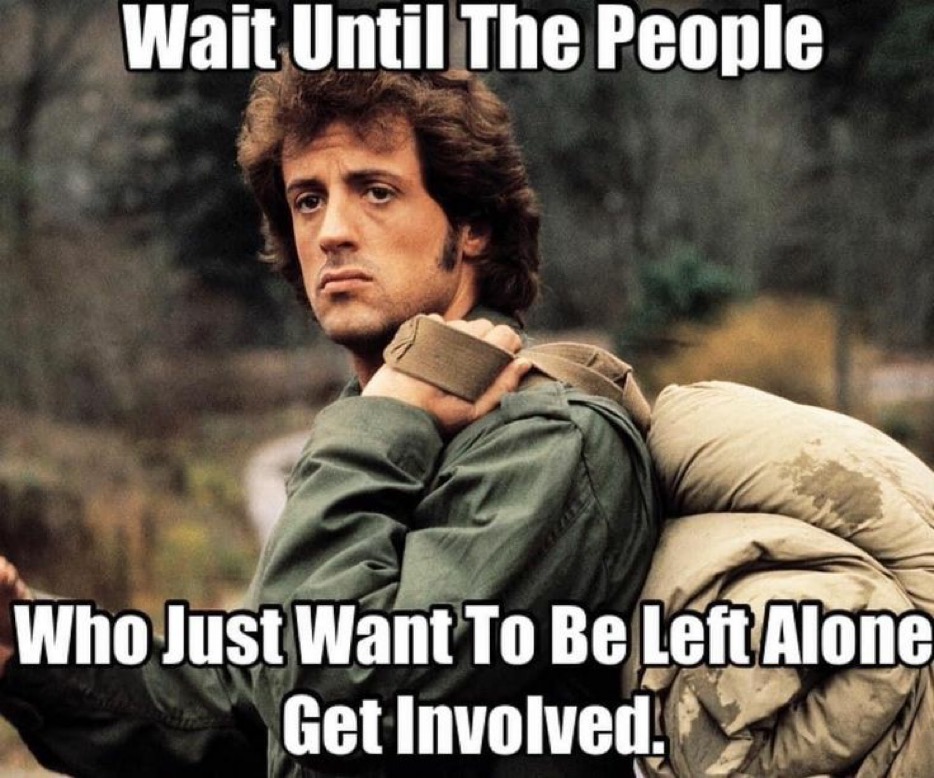 I haven't noticed any less traffic the last year and a half.
If people aren't working, they're still out on the roads.

"That 60 in the back's got only 7 yards hangin' off.
You're welcome. Nice whitewalls, troop" [bails]
RIP Brian D. My favorite Sheriff to hate guy.

I think the closer we get to the rules being ridiculous, and the
force required to police them becomes more visibly un-American:
The more that 20% are going to become an audible "Hell no."

The little lady has been rebuking me lately for yelling too much
... at almost everything. I feel terrible, because just now I realized
I should be saving my tubes for divorce: from the federal government.

posted on Aug, 9 2021 @ 09:36 PM
link
For what I been reading, is a movement going on within congress that are trying to stop the federal government from mandating the passports.

Do not think that the china biden administration is not already planning how to execute this next phase on the population, universal passports for every american in order for people to be able to do their basic social needs.

Now already NY is is been the first ones to push for this to see how it goes and how the people will respond, parts of California already are asking for prove of jab and many other places, if you look is all in states with democrat hold.

While the Republican states are holding back, they need all states in the same agenda to work.

What ever the agenda is, is not for our benefit and never is, we have history to show that humanity is not easily manipulated and never ends well.

While many has taken the jab due to the scamongering it will not be the same with mandatory boosters twice a year.

You will not be allowed your freedoms even if you are vaxed and masked and shut-down.

We all knew this was going to happen and with 50% of the population going full Karen, those of us left will just be meat in rail cars.

But we all have said this was going to happen.

Now that it is, I don't see why anyone is shocked.

Is you notice from the beginning is been worked in phases, we can pretty much predict now what is going to happen next.

I am no longer shocked I am out right angry and upset.

So can a well placed WMD.

What the article fails to explain is how civil disobedience, or the frustration that may have prompted it, has any power to stop a disease from spreading?

The article is like a flag for the stupid to wave.

The only thing that is been spreading dangerously right now, is how the government is working on taking away any rights we have has humans including the ones that are by laws.

And do not think that because you got the jab you are exempt from losing your freedoms.

This is for all no just the few.

Identifizierung bitte, Hitler most be laughing in his grave

so, now they have a lock out.
how is civil disobedience going to work?
you tell them you won't come to work
they tell you not to come to work.

originally posted by: marg6043
a reply to: chr0naut

The only thing that is been spreading dangerously right now, is how the government is working on taking away any rights we have has humans including the ones that are by laws.

And do not think that because you got the jab you are exempt from losing your freedoms.

This is for all no just the few.

Identifizierung bitte, Hitler most be laughing in his grave


Please show which rights, in either your Bill of Rights, or in the Universal Declaration of Human Rights, are being taken away?

In a few years, people will have to look it up online to find out what COVID-19 was.


That does not imply that 'the free' can't also be stupid.

I mean, look at that guy spray painted blue, with the 'cow horn fur hat', that was enjoying the January 6 photo opportunity in the Capitol building. Ya gotta admit it.

Also, the other guy in the Four Seasons Landscaping skit was fairly funny, he also did that 'face melting' one too. LOL.

There are stacks of 'free' flag wavers for stupid.

I don't fricking doubt it one iota, and I expect the gaslighting attempts to ramp up further. Can't have them thinkin' folk doing none of that thinkin' stuff, gotta blame some relentlessly and rile up the rest to foam at the mouth.

Indeed I do. As I recall, I believe we were both calling immediate bull# in that thread, along with many others that were right on the money of it being -- wait for it -- authoritarian BULL#.

The fight for freedom is never stupid.