The heat wave in Japan

posted on Jul, 31 2021 @ 06:32 AM
link
It's over 90f here in Japan today. Our farmlands are cracking with heat stress and no water in the soil. Watermelons are being brought to market but they are cut up and let people know what they look like. Most are 40 percent eatable . Mushmellons are being taken out of the fields and being sold , but too green not really eatable .

Our crops here are being devistated by the heat wave.

its that man made global warming we have been trying to tell all of you about for decades. we're scewed now
edit on 31-7-2021 by OtherSideOfTheCoin because: (no reason given)

You're just starting to get warmed up down there aren't ya?
It's not hot yet.

originally posted by: BrokenCircles
a reply to: eXia7

You're just starting to get warmed up down there aren't ya?
It's not hot yet.

Uh huh, our entire existence, a cosmic blink of irrelevancy and somehow our 100,000 year journey on this planet has been enough to change the direction of this habitat, of which was undeterred for Millions of years. A chaotic cycle of destruction and rebirth volcano and other natural cataclysms that put Humanity to shame, we couldn't even compete with ONE(1) Volcano, which can output vastly more Carbon into the Atmosphere than any single species entire industrial revolution.

Yet somehow, we're the authority of geological processes that were and still are occurring long before the birth of our species?

You people are literally crazy and clueless *shrugs*

posted on Jul, 31 2021 @ 08:40 AM
link
I live by Lake Ontario in NYS. Here we have been setting record cold levels for July. I know the P.N.W. has been a sauna. Fun times. Bet our greatx3 grandchildren will see an ice age.

I may be a bit of a bumpkin. But I'm pretty close to nature. I.e. reading signs for weather forecasting, wild and domestic animal behavior/health. I like the "weather" and study it in the past. Things do seem strange but are in par fo 50, 100 and 1000 year "oddities". Just the older cycles, no one is around to say, "hey, this happen back in(insert date here).

So my micro theory is that we are geologically close to heading into an ice age. Which is a misnomer. It was a total coverage ever. But it does seem some artic places are melting which would mean more fresh water run off in the sea. I would assume. Eventually said run off would build up until it reached a point in which the northern Atlantic and Pacific would ice over. Say south to Virginia latitude area. The smaller but still exsistant glaciers would swing on down through their old routes. I'm most likely wrong but hey, that's the fun with theories. You can come up with them however you want. It's the science that throws a monkey phallus in the works.

Should be plenty of rain coming unless it’s diverted ?

Is that hot for Japan? We're looking at 96F today with a 111F heat index (NW Louisiana).

Don't fret, we just came out of a record cold winter that shut the South down for a solid week. This extreme weather is the calm before the storm. A GSM is underway and we're supposed to feel the effects of it starting in 2024.

I know, I mean this must be the hottest the Earth has ever gotten and it's not like we are still in an Ice Age ... 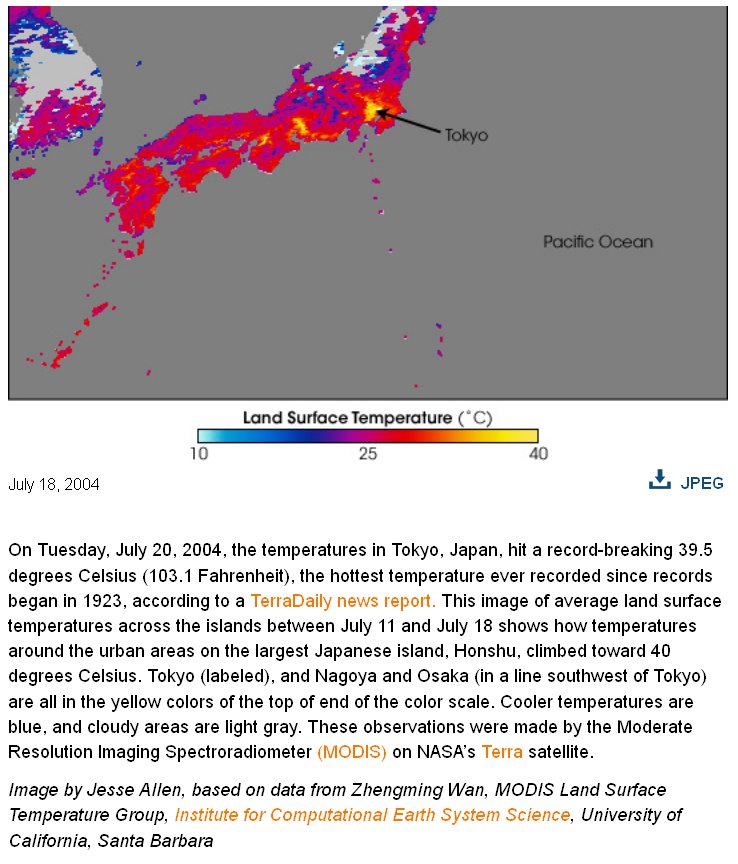 That was pretty hot though, and it sounds like it got hot again.
Drink plenty of fluids.

I know, I mean this must be the hottest the Earth has ever gotten and it's not like we are still in an Ice Age ...

A lot of Florida will be underwater by the time Greenland gets back up to 85 degrees F:

What's the hottest Earth's ever been?

Need one or two good volcanos....