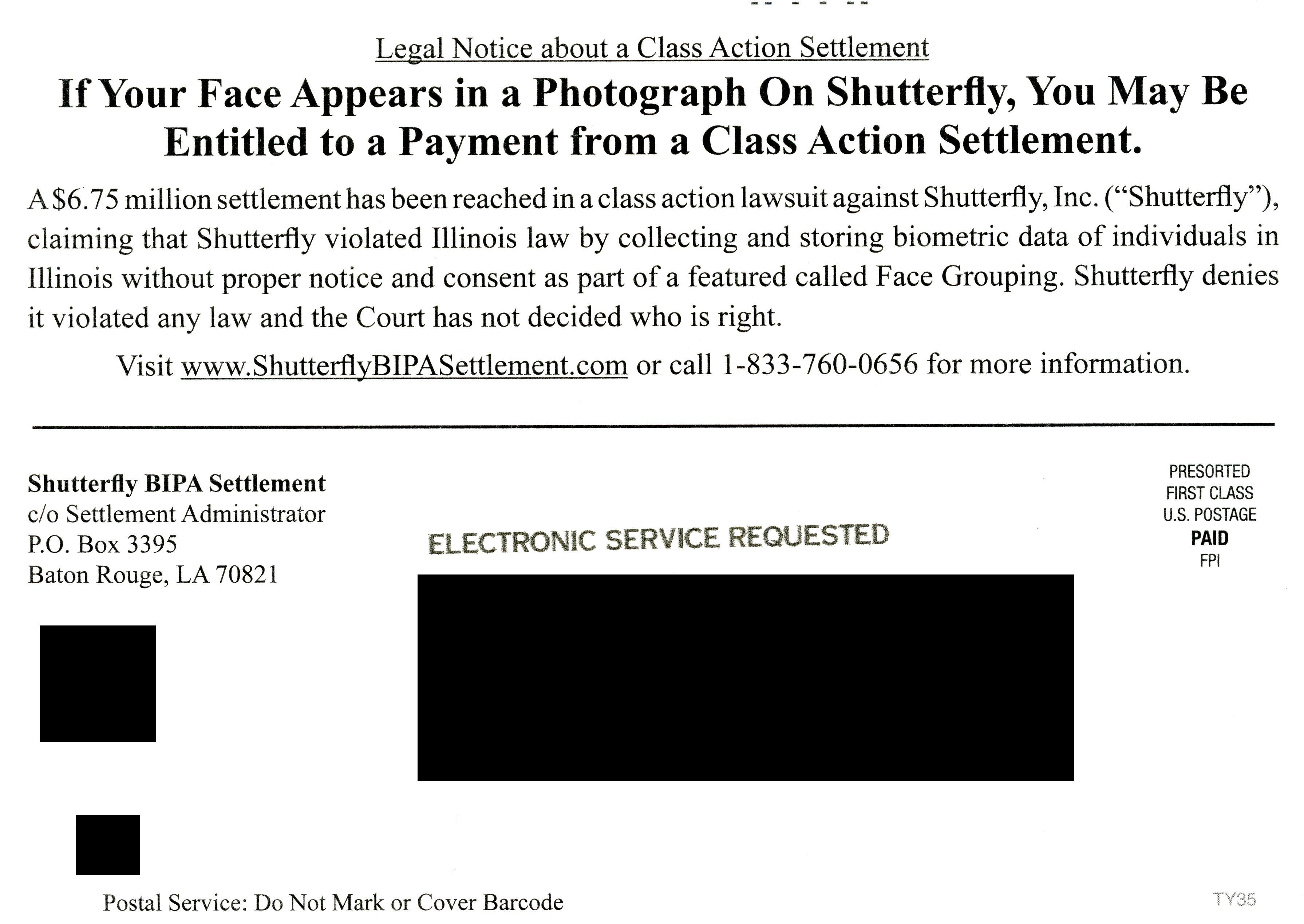 "Legal Notice about a Class Action Settlement
If Your Face Appears in a Photograph On Shutterfly, You May Be Entitled to a Payment from a Class Action Settlement.
A $6.75 million settlement has been reached in a class action lawsuit against Shutterfly, Inc. ("Shutterfly"), claiming that Shutterfly violated Illinois law by collecting and storing biometric data of individuals in Illinois without proper notice and consent as part of a featured called Face Grouping. Shutterfly denies it violated any law and the Court has not decided who is right."

Now, that sounds like a serious breach of the law if you ask me.

A few years ago, my sister was travelling through Chicago and a couple months later she received some kind of speeding ticket through the mail. Her face and data from her license plates were apparently photographed from some camera mounted on the highway going through Chicago. I don't recall that Illinois asked my sister's consent to do this. Wouldn't this be against the same law touted on the card I received? How is the behaviour of Illinois any different than the supposed violation committed by Shutterfly?

Illinois has got to be the most corrupt place on the face of the earth. I'd even say it's worse than Washington, D.C. Something needs to be done to Illinois to get them back on the right (legal) track.


as part of a featured called Face Grouping


as part of a "featured" called Face Grouping
OOPS
One of the first clues to a sham .

posted on Jul, 29 2021 @ 08:36 PM
link
Wow that happen to me when I was in Hawaii, but the thing is I was living aboard the military base, Kaneohe bay, I received a notification of a ticket, it showed the day and time, the thing is I was no driving during that time.

How in the hell I got a ticket? I call the office that send the ticket and told them to prove it was me, I never head from them again.

Illinois fairly recently got some massive contract with a company I believe was called Internet2....not positive on the name, but it is a very odd company in that they have built a private fiber network that they sell to govt and educational institutions.....odd right?


Illinois has got to be the most corrupt place on the face of the earth. I'd even say it's worse than Washington, D.C. Something needs to be done to Illinois to get them back on the right (legal) track.


I have a solution for DC and for Illinois. Unfortunately, I can't share it on ATS.

On topic: Shutterfly violated 2 sacred government precepts...
1. The government does not like competition.
2. Do as we say, not as we do.

posted on Jul, 29 2021 @ 09:34 PM
link
I don't think this law will stand. It has already been ruled that you have no expectation of privacy by not being photographed or videoed in a public place. You only cannot by law, be photographed in your own property and any private area like a hotel room you rent or a restroom, without your premission. You can photograph or video someone on their property as long as you stay on public land like a sidewalk or roadside. That is I think 30 to 50 feet or more form the center line, depending on how the road is made. People sometimes will get mad and argue with you but it is still the law.