The first time I encountered something strange.

One day I was sitting in my bedroom watching The Blair Witch project on VHS. It was around 11am and i am pretty sure the date was April 12. I don't know if that is relevant to this experience but it is what I was watching and I had seen the movie before. I was wide awake. 100% awake and alert. I say this because I can't really explain what happened next. I had been sitting against the headboard of my bed and suddenly I felt a weird vibration and almost like buzzing in my skin and then I have no idea what happened, but suddenly I was standing in the space between my headboard and the window behind my bed, facing toward the window. There is a blinding light coming in the window, like so bright that around the edges of the light, even though it was daytime it looked dark as night.

The next thing I remember, I am standing in the side-yard of the house and a lawn chair that was not there previously was to my left. It was nighttime now, and in front of me stood a very tall woman with very long, wavy bright blonde hair and huge dark eyes. She seemed human, except for her eyes and height. She was dressed in an all black outfit that seemed really shiny, now I recognize this as being very similar to a PVC fabric. She had a headband that matched her outfit and she stared into my eyes as if she was trying to communicate something to me. All of a sudden, she stuck one arm up in the air and took flight straight upwards. I saw her shoot up into the air and then a big gust of wind and the same bright light happened and all of a sudden I was in my bed and it was 9:45pm.

A few months later I went to a used book store with my parents and saw a book titled "The UFO Phenomenon". I looked through it because I had really never been into UFOs and Aliens before the experience I had (I was a really girly girl and my parents do not believe that aliens or space exist because of their religion) but afterwards it kind of became a secret obsession for me for quite awhile. I would sneak on websites like ATS at school to read other people's stories and see if anyone had experienced anything similar to me and I never have found any stories that are similar to mine. With the exception of this book.

To me, this is some type of crazy coincidence I just cannot wrap my mind around because it was so mindbending to me to experience this and then have so much doubt in my mind and questions because I honestly did not know exactly what happened and I was questioning IF it even happened and then it was like BAM! Yes this happened. Well. Something happened. This book that I found months later has a hand drawn picture of the exact woman I encountered. Exactly. This picture has proven to be a source of frustration to me because I did not have hardly any internet access to find out more information and I have been fruitless in my recent searches. I am hopeful that someone here might be able to help me find the complete story of this drawing because all the book says about it is what the caption of the picture says.... "in 1975 an English girl drew this picture of a 'space woman' who, she said, visited her home."

Here is a screenshot of the book that has the drawing of the alien woman. She is at the bottom of the page.

Following this encounter i have had several strange things happen that I would say are "paranormal" or just... not normal occurances like objects moving. One time I threw a sock into the air and it disappeared. Like legitimately disappeared. I only threw it a couple feet above my head and it was just....gone. There are other things but it is really just a long story that shouldn't be in this post. I mainly just made this post to tell part of my story and see if anyone has read or heard similar stories anywhere or knows the full story behind this drawing in this book.
edit on 28-7-2021 by Chalcedony because: (no reason given)

posted on Jul, 28 2021 @ 11:41 AM
link
a reply to: Chalcedony
I'm very curious to know why your parents don't believe in space, and what their religion has to do with that belief.

But unfortunately... I can't help out. I just don't know how. The girl who drew that picture could still be alive, but idk if it's creepy to try to track her down, lol. There is that though.

Thanks for sharing, and I hope you get whatever support you need or came here looking for!

I can't help you with the book, or have information about the woman you saw, but it sounds like you were either having an out of body experience and ran into a being in the astral plane, or else this woman summoned you for some reason that you don't remember. She may be in charge of following your progress on Earth, like a guardian of some kind.

The buzzing sounds like what people report just before they have an OBE; that's why I said you could have had an OBE.

Speaking of your sock disappearing, things like that do happen. I had a ring setting disappear and it reappeared in front of my eyes at a totally different location three months later.

It's a strange world we live in.

Hope you find your answer.

They just believe that God created the firmament and dome/flat earth stuff so it is the interpretation of the Bible they go with is more literal. It is not a specific denomination. How would aliens be visiting earth when it is under a dome? and God made everything, no aliens in Bible etc. And then by extension space can't exist either. They think the moon is a light in the sky and stuff. But they are not "close minded" like....I can believe whatever I want now that I'm an adult and they don't judge me for that. They are pretty literal with what the Bible says and extreme in some aspects.

This is another avenue I haven't thought of. I am going to read about OBE's and see if this can describe what happened. Thanks.

posted on Jul, 28 2021 @ 01:01 PM
link
Heh. You saw a "Nordic." They used to be more common among contactees, but they haven't been around a lot lately, particularly after Billy Meier crapped that bed. But you say this happened when you were a kid, so maybe.

There can't be that many women in the UK named Glenda that are 56-57 can there? 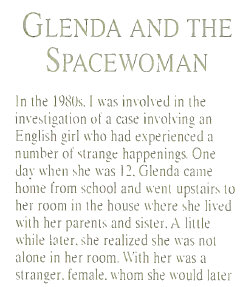 Chris, oddly enough, when looking for the book quoted with the drawing, I ran across a parapsychology blog article that mentioned the book. One of the people who commented about the article was named Glenda and stated she had an interest in the paranormal. Not sure what the odds are of that; I figured synchronicity was snickering at me.

That is really weird sir..

This is freaking amazing! I have never even found this drawing anywhere else and you found this old geocities site that has it! And more information! Thank you so much oh my goodness this is AMAZING.!
edit on 29-7-2021 by Chalcedony because: (no reason given)

What has kept me from thinking it was a Nordic type alien is because all the descriptions I find seem to say that they have blue eyes. Her eyes were totally black and very large like how people describe Grey's eyes. But other than that and the height, she seemed human.

originally posted by: Chalcedony
There are other things but it is really just a long story that shouldn't be in this post.

The line between the paranormal and contactee experiences is a very thin one and crossed regularly, if they are seperated at all.

I am interested in the buzzing / vibration moment - could you describe further, have you ever had an electric shock (not saying that is what it was, just as a means of describing how it felt) ?

I ask because I also had a similar incident, although it wasn't immediately followed by any unusual occurrence such as yours I have subsequently (years later) had some strange experiences.

posted on Jul, 29 2021 @ 11:31 PM
link
Thanks for sharing your story. I'm know just sharing this kind of stuff can be pretty scary in and of itself, with people being judgy, or thinking you were on drugs or whatever.

I've had some weird experiences myself that I cannot fully explain, but nothing that I have any reason to believe is "extraterrestrial" in nature.

It's always easy to dismiss other people's experiences, until you have one of your own. Then all of a sudden, people are not so quick to dismiss, even if it's not the same kind of experience.