page: 1
27
log in
join
share:
angelchemuel
+7 more
posted on Jul, 25 2021 @ 10:37 AM
link
The picture below got me thinking.
For many years, probably since the book was first published, we have used "1984" as a focal point, a hinge of sorts, the 'hub' to make sense of Government/Elite/Illuminati et all's consistent and persistent eradication of our freedoms, introductions of control over the general populace, 'behind closed doors' manoeuvrings to the advantage of the few and detriment of the majority. You all know what I mean, everything and anything where the 'label' 1984 can be applied. Heck I even remember my own parents using said label back in the '70's before the year 1984 came about! 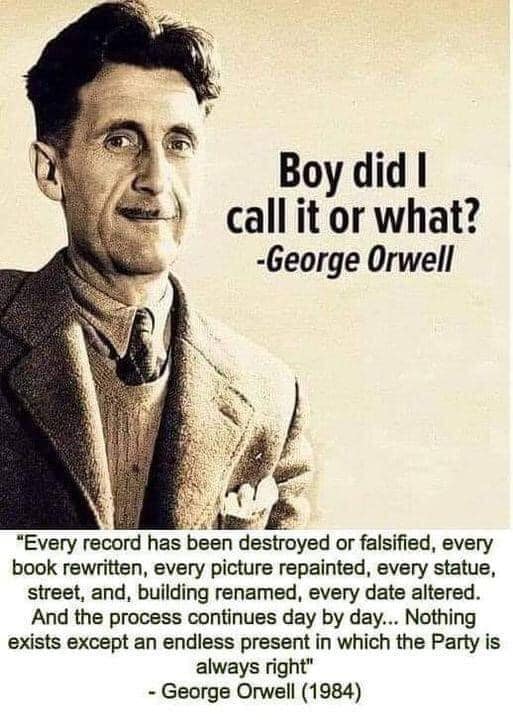 I would like to point out I have never read the book, attempted the film once but it was not my 'thing', far too much negative energy jangling my nerves. So why do I have the audacity to start a thread about 1984 when I have not done the back ground research? It was the "Boy I called it right" in the above pic that got me thinking. Why did GO pick 1984?
So I looked up what happened in 1984.

The prize was awarded jointly to:


UK and China Agree on Hong Kong Great Britain and the People's Republic of China agreed on terms for the return of Hong Kong to China when the 99-year lease to portions of Hong Kong was to expire in 1997. Under the agreement, Hong Kong was to maintain its capitalist system after its return to Chinese control.


Indira Ghandi Murdered While walking home from her office, Indira Gandhi was killed by two of her bodyguards. Her assassins were Sikh extremists retaliating for the raid she ordered on their shrine in Amritsar, which had resulted in the deaths of over 1,000 Sikh separatists. Hindu rioting after the assassination killed more than 2,000 Sikhs.


AIDS Breaks Out French scientists reported isolating the virus that caused Acquired Immune Deficiency Syndrome (AIDS). In 1984, 7,000 cases of AIDS had been reported in the United States; 3,300 of its victims were dead by the end of the year.


Britain and Ireland's top pop musicians gathered in a Notting Hill studio to form Band Aid and recorded the song "Do They Know It's Christmas" in order to raise money for famine relief in Ethiopia.


A massive year-long miner’s strike began during March of 1984 in England.


The first ever flight in space by humans un-tethered using jet back packs takes place.


English pound notes are to be taken out of circulation


By the year end more than 70 US Banks fail

Busy, busy year and much more at the links.
But start looking at the bigger picture, what was happening in these pockets all over the World and how each of them can be linked to knock on effects to other countries. I'm sure Orwell must have just plumped for 1984 as good as any year to pick.
There's an almost daily chronological list at Wiki....
Link

What links can we make ATS'ers that have brought us to where we are now?
Should we be looking at what happened between 1948 and 1984 or was it no more than the reversal of 1948 that Orwell picked?

Rainbows
Jane
PS MODS, I had thought of putting in General chit chat. If I have posted in wrong forum please move.

The book was released in 1948, they just reversed the last two digits. Nothing nefarious there, it's just an almost random year in the future. It really could have been any year picked that was just far enough in the future to use.

Should we be looking at what happened between 1948 and 1984 or was it no more than the reversal of 1948 that Orwell picked?

That was pretty much the era of globalization settling in -- setting up the UN, the Bretton Woods conference, NATO, the EEC and later EU. Add in the superpower competition in the Cold War, and one can see a lot of the drivers that contributed to the global dysfunction we now experience.

One of my favorite passages.

Ask me why sometime...whoever bought this site knows damn certain why.


What links can we make ATS'ers that have brought us to where we are now?
Should we be looking at what happened between 1948 and 1984 or was it no more than the reversal of 1948 that Orwell picked?

Apparently, it was named after a poem by his wife, Eileen Blair - The End of the Century, 1984.

Either way, he did indeed Fn nail it.

I read it in senior lit in highschool. That was 64 and 84 was a long way away. My professor was keen on at least one of us in the class choosing that book to report on. I was the only one who chose it.

I didn't care for it much but at that time it was science fiction and that was what I liked. It wasn't science ficttiony enough for me so I panned it to the class. I recall though pointing out some of the scary things in my oral report to the class. No one, even myself let much if any of it sink in.

However, as I continued to read s/f and veered away from the spaceship laser shoot em up type and more into speculative s/f I began noticing that other writers were touching on issues that Wells had considered. Vonnegut and Dick among many others were taking our society apart and saying, WATCH THE F**K OUT PEOPLE.

posted on Jul, 25 2021 @ 11:26 AM
link
The film is on a pace slightly faster than the original Solaris. The book isn’t too bogged down. Animal Farm, is a breeze though. Worth a read for the same reasons. Orwell himself was a Socialist. More of a Democratic Socialist and both Animal Farm and 1984 deal with themes of when socialism has gone too far and became a Totalitarian Collectivism to outright Communism.

Political Intrigue and comparative governances aside, you do have interesting characters that are relatable. Everyone likes Boxer from Animal Farm, but no one would ever want to be him. Reading 1984 now (compared to 1948) will give you deja vu. Then, it would had to have been as dystopian to the reader as Mad Max was when it came out.