page: 1
35
<<   2  3 >>
log in
join
share:
ColeYounger
+18 more
posted on Jul, 21 2021 @ 04:16 PM
link
Most people had not heard of Anthony Fauci till the Covid virus hit the U.S. in January of last year. If you did an online search, you'd probably think Fauci was a bureaucrat with some impressive credentials. M.D., scientist, NIH director. Still, largely unknown to the average citizen. You'd see short clips of him on the news, discussing the Covid issue, and that's about it.

Then Brad Pitt played Fauci on a Saturday Night Live show opening. The SNL bit was not only meant to praise Fauci, but far more importantly, to bash Trump. That was all it took. They found a new hero. And as always, the hyperbole and b.s. started. Suddenly this 80 year old guy was cool and sexy.
Woke starlets young enough to be his grand-daughters confessed of their "Fauci crushes". If you think I'm joking, here ya go: Sexiest man alive? Another messiah of the left. He could do no wrong. If someone even questioned him, they were attacked as 'anti-science', or a 'conspiracy nut'.

But recently, Kentucky Senator Rand Paul has truly exposed Anthony Fauci for what he is. An evil, unethical, conniving liar. Rand Paul provided proof that Fauci was involved in the gain of function research and funding at the Wuhan Lab. Fauci has been involved in it for at least 8 years. That's not even questionable. But Fauci just keeps lying. He'll say he didn't know what the funding was being used for, then he'll say they weren't conducting gain of function research, then he'll argue about the goddamn definition of "gain of function". ( Reminds me of Bill Clinton's defintion of "is" )

Some political commentators like Candace Owens recently said Fauci should be in prison. Many agree with her, especially after seeing Rand Paul's exposing of Fauci. Now here's where it gets weird: Does the left even express any interest in maybe finding out the truth? Hell no. The wokesters have doubled down on their Fauci adoration! The libs have now waged a war against Rand Paul. There are thousands of tweets from Fauci admirers wishing death to Rand Paul for attacking their beloved hero.

The White House just keeps exalting him. In a White House attempt to resonate with young people last week, 18-year old Disney star Olivio Rodrigo appeared with Fauci in a White House promo. She praised Fauci for his "intelligence and compassion".

Last month, Jill Biden and Fauci did a sort of good-will propaganda tour, where they appeared on talk shows and at health care centers, preaching the gospel of Pfizer and Moderna. Jill constantly reminded audiences that "everybody loves Dr. Fauci", and that "he's America's doctor!"

Good job by Rand Paul, but the DOJ is as corrupt, maybe more corrupt, as the rest of the federal government. Not likely anything will come of Rand Paul's work.


to me he will always be "Sarsoman" in his tower of Bio-thanc, in the gap of Biden-guard...

I knew something was up, first time I seen him on tv. NBC's Today Show interviewed him. They gave him softball questions and treated him like a god. That alone was a huge red flag, gotta love your good ole instincts.

I do hope this Rand Paul stuff goes somewhere, but not holding my breath. Maybe at least it will open some peoples eyes.

There’s a poster of fauci in the Oval Office where George Washington used to be in a man-kini chugging a huge Stein of beer riding on the back of a grizzly bear. It’s Biden’s favorite.


Not likely anything will come of Rand Paul's work.

Sad but true. The White House has Fauci's back. He's untouchable.

It's honestly pathetic. Worse than the devoted, obsessed groupies & celebs, honestly. Edit: And I mean that, honestly.. It's funnier than an edit to remove the extra use.
edit on 7/21/2021 by Nyiah because: (no reason given) 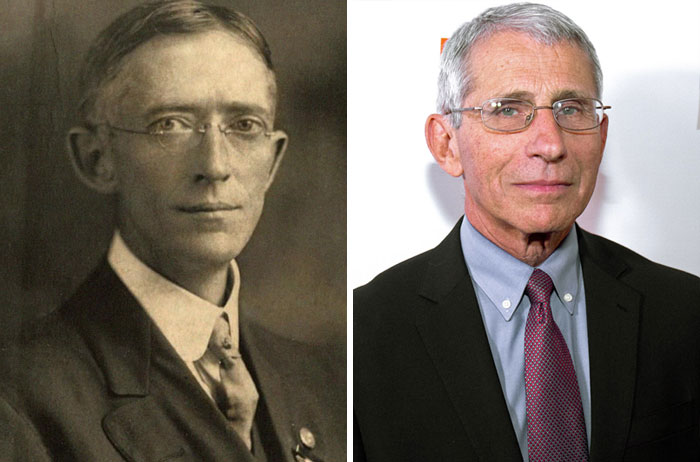 Nothing can happen to him. He is immune to prosecution via the PREP Act put in place January 2020. Has to do with the FD&C Act.

Yeah, same case with Gates, Bezos, Biden's, etc. They are human gods and immune to anything negative happening to them.

Fauci could have a basement full of 100's of sex slaves and commit mass genocide and he wouldn't even receive a slap on the wrist yet the average person could get into a simple bar fight and get jail time and fines.

Pretty backwards if you ask me.

originally posted by: Nyiah
It's like they can't harden up & "release" for anything BUT Fauci anymore.

It's honestly pathetic. Worse than the devoted, obsessed groupies & celebs, honestly. Edit: And I mean that, honestly.. It's funnier than an edit to remove the extra use.

After Avenatti, they need a new daddy.

The left's been worshipping the alter of science for decades with the church of climatology. They moved on to sex, and Fauci is just their latest bull crap.

Funny part is what they call science. For as long as I can remember when it came to 'doctors' we were told to get a second opinion to now where there are no opinions allowed but their own.

posted on Jul, 21 2021 @ 05:13 PM
link
Fauchi is not dumb, he knows how to work the system. He knows how to parrot information people want to hear and will twist evidence to fit his perception. Does he actually know he is twisting the research to fit his beliefs? Not many people realize they do it. Although, he has lied outright lies on occasion, which can be used to fire his arse. If you believe something and parrot it, it is hard to get charged with a crime...although the left wants it to start happening to those who do not believe the way they do and say things they do not want to hear. So far the left is using ad Hominum tactics to discredit these people but that is about to change in the future, the new wave will be that if you say something that the majority in society does not believe in, you will be charged with a crime if it hurts a liberal.

Hero-worship and Villainizing are trademark behaviors of lower-vibration-consciousness. Extreme Left and Right-wingers often exhibit this behavior. Mostly the left as of late.

The evil left just loves itself. They see themselves in Fauci so of course they adore and idolize him because they (the evil left) also feel that they need to be adored and idolized.

I swear, if real people were a requirement on the internet, that the extremist on both sides would widdle down to 20 rejected pink haired angry women and few feminist dudes.

In other words, his following is mostly manufactured by these terrorist media and silicone valley companies.

edit on 7 by Mandroid7 because: Corr

originally posted by: Mandroid7
a reply to: DBCowboy

I swear, if real people were a requirement on the internet, that the extremist on both sides would widdle down to 20 rejected pink haired angry women and few feminist dudes.

In other words, his following is mostly manufactured by these terrorist media and silicone valley companies.

The media and government has too much invested into Fauci to ever turn on him. They'd have to re-evaluate themselves otherwise.

posted on Jul, 21 2021 @ 05:32 PM
link
I feel the same about the insane hero worship you guys give Trump. So much so that you're willing to throw Democracy down the drain for an autocracy or even dictatorship.

Be honest, if you guys could, you'd make Trump the King. So please, stop declaring you love for America, you're patriotism, and you reverence for the Constitution.

And Fauci is only a man who's been in his field for over 5 decades. I think if I'm going to listen to anyone, he might be the one when it comes to viruses. But feel free to get all your medical advice from McCarthy, Carlson, Hannity, and good old Mitch.