“during this year a most dread portent took place. For the sun gave forth its light without brightness… and it seemed exceedingly like the sun in eclipse, for the beams it shed were not clear.” Procopius of Caesarea

“The sun was dark and its darkness lasted for eighteen months; each day it shone for about four hours; and still this light was only a feeble shadow … the fruits did not ripen and the wine tasted like sour grapes.” Michael the Syrian

And the earth with all that is upon it quaked; and the sun began to be darkened by day and the moon by night, while the ocean was tumultuous with spray (?) from the 24th of March in this year [536 AD] till the 24th of June in the following year fifteen [537 AD]. Zachariah of Mitylene

The Sun became dim...for nearly the whole year...so that the fruits were killed at an unseasonable time. Priscianus Lydus

The Sun, first of stars, seems to have lost his wonted light, and appears of a bluish colour. We marvel to see no shadows of our bodies at noon… The Moon too, even when her orb is full, is empty of her natural splendour… We have had a winter without storms, a spring without mildness, and a summer without heat. Flavius Cassiodorus

In China, "the stars were lost from view for three months". Records indicate that the light from the Sun dimmed, the expected rains did not eventuate, and snow was seen in the middle of summer. Famine was widespread, and in the midst of the turmoil, the Emperor abandoned the capital. Unreferenced

Once considered fiction nearly as much as fact, the events of 536 AD have been, and still are, a topic of study, debate, and speculation by academics, historians, and researchers. Thought to be one of the worst times in human history to have lived, humans suffered through years of climate extremes, famine, drought, crop failure, wars for resources, mass migration, cold summers, and 50 years of Bubonic plague starting in Justinian’s Rome and spreading through West Britain as well.

Many millions died from starvation, wars, plague, and even cannibalism. While the Northern Hemisphere took the brunt, few places globally escaped the effects of a catastrophe that would shape the world for a century to come. Mortality estimates vary but range from lower to upward of half the global population or over one hundred million dead and had a profound effect in Europe, the Middle East, and parts of Asia.

A few different scenarios have been put forward for the events recorded by historians of the 6th century, from comet impacts to a volcano, a super volcano, two volcano’s, and even 3 eruptions. Several volcano’s have been named as possible suspects including Rabaul, Krakatoa, Ilopongo, and a North American volcano, as well as Alaska and Iceland. In the 1990’s, tree ring studies brought renewed interest in finding the cause of something akin to nuclear winter. 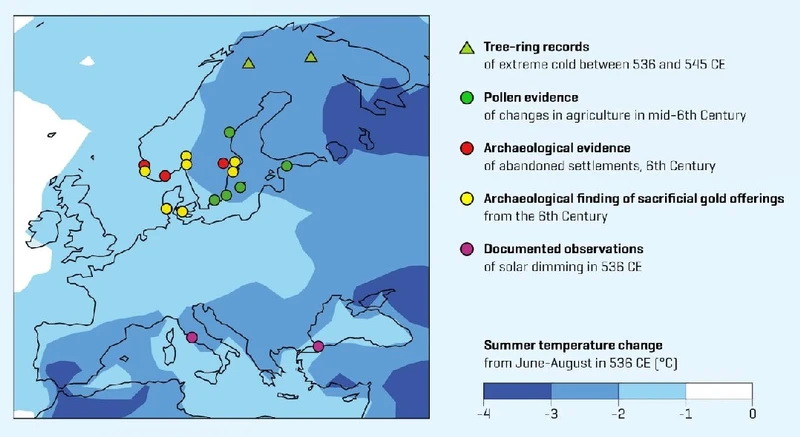 
When a volcano erupts, it spews sulfur, bismuth, and other substances high into the atmosphere, where they form an aerosol veil that reflects the sun's light back into space, cooling the planet. By matching the ice record of these chemical traces with tree ring records of climate, a team led by Michael Sigl, now of the University of Bern, found that nearly every unusually cold summer over the past 2500 years was preceded by a volcanic eruption.


decided to look for the same eruptions in an ice core drilled in 2013 in the Colle Gnifetti Glacier in the Swiss Alps… using a new ultra–high-resolution method, in which a laser carves 120-micron slivers of ice, representing just a few days or weeks of snowfall, along the length of the core… The approach enabled the team to pinpoint storms, volcanic eruptions, and lead pollution down to the month or even less, going back 2000 years…


...came up with the following scenario and pinpoints an Icelandic volcano as the culprit. 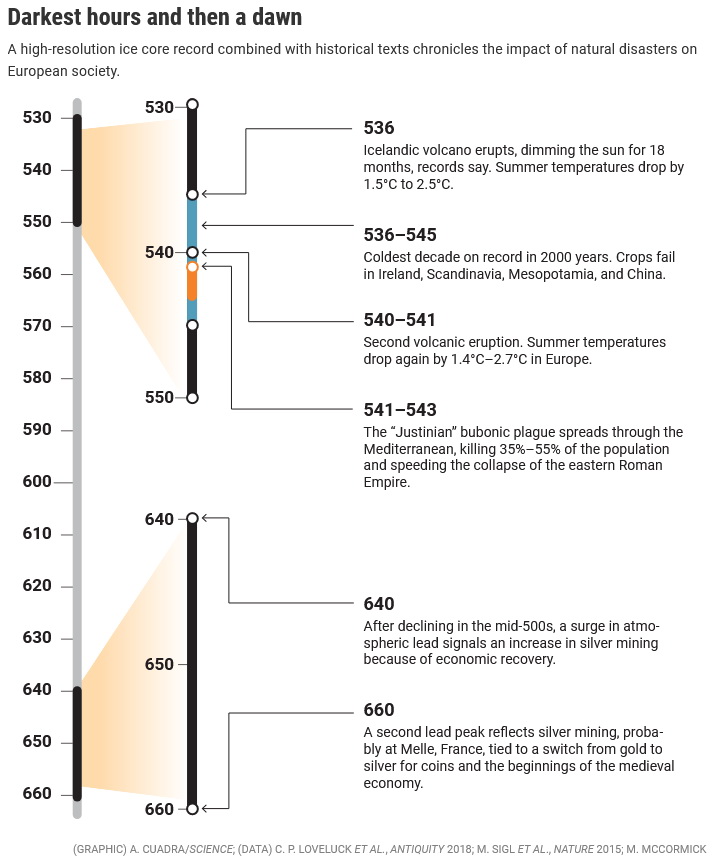 However, the first team disagrees, and says much more evidence is needed to conclude the eruption was in Iceland rather than North America. Still, the graphic above may be a fair approximation of the sequence of events but the science is by no means settled to this day. Most seem to agree it was likely one or more eruptions, but can’t seem to agree on which volcano(s) are likely. National Geographic printed a story in 2019 pointing to Ilopango in El Salvador as the culprit and claimed the mystery was solved, only to retract the story a month later.

We may never know which volcano “heralded the onset of the Dark Ages” and was possibly instrumental in giving rise to Muhammad and Islam as some have suggested, but we do know the 536 AD and ensuing events completely changed the course of history.

Note that this post is a brief overview of the topic at hand. There’s no way I can do it justice. It’s too big and far-reaching. If you have an interest, it’s a deep rabbit hole indeed. One that is pertinent today in my opinion. For all of our advancements and technology, we are still at the mercy of the elements. It could happen today just as it has in the past.

Sources used or referenced:
Why 536 was ‘the worst year to be alive’
The Worst Year Ever to Be Alive in History
The great year of darkness and the rise of Islam
Colossal volcano behind 'mystery' global cooling finally found
Eruption of El Salvador's Ilopango explains A.D. 536 cooling
The Global Cooling Event of the Sixth Century. Mystery No Longer?
edit on 7/16/2021 by Klassified because: grammar
edit on 7/16/2021 by Klassified because: correction

posted on Jul, 16 2021 @ 01:45 PM
link
As the magnetic pole drifts to the next destination I believe the magma plumes drift with the new orientation of the poles. This likely leads to a slip of the physical pole IMO.

Lost of reason to believe Earth has been here many times and we can hope we weren't born at the beginning of or during a bad geological event of historical proportions.

posted on Jul, 16 2021 @ 03:52 PM
link
a reply to: SeekingDepth
There are quite a few videos on youtube regarding this topic with varying opinions and some more accurate than others. That's why I didn't post one in the OP. This is one I haven't seen, so I will give it a watch and see which theory they fancy.

Cannot imagine the chaos in our already chaotic world if this were occur again in the same way...