John McAfee's Wife Janice Released a Statement about his "Suicide".

page: 1
53
<<   2 >>
log in
join
share:
Realtruth
+27 more
posted on Jul, 7 2021 @ 09:44 AM
link
John's wife Janice heard about his death on social media, and had actually spoken to him the night prior. Normal "I love you, stay strong" conversation and I'll talk to you soon, nothing out of the ordinary. And more about how they were in a great position legally, so it's surreal that he would take his life.

Did he commit suicide, or was he Epstein'd? 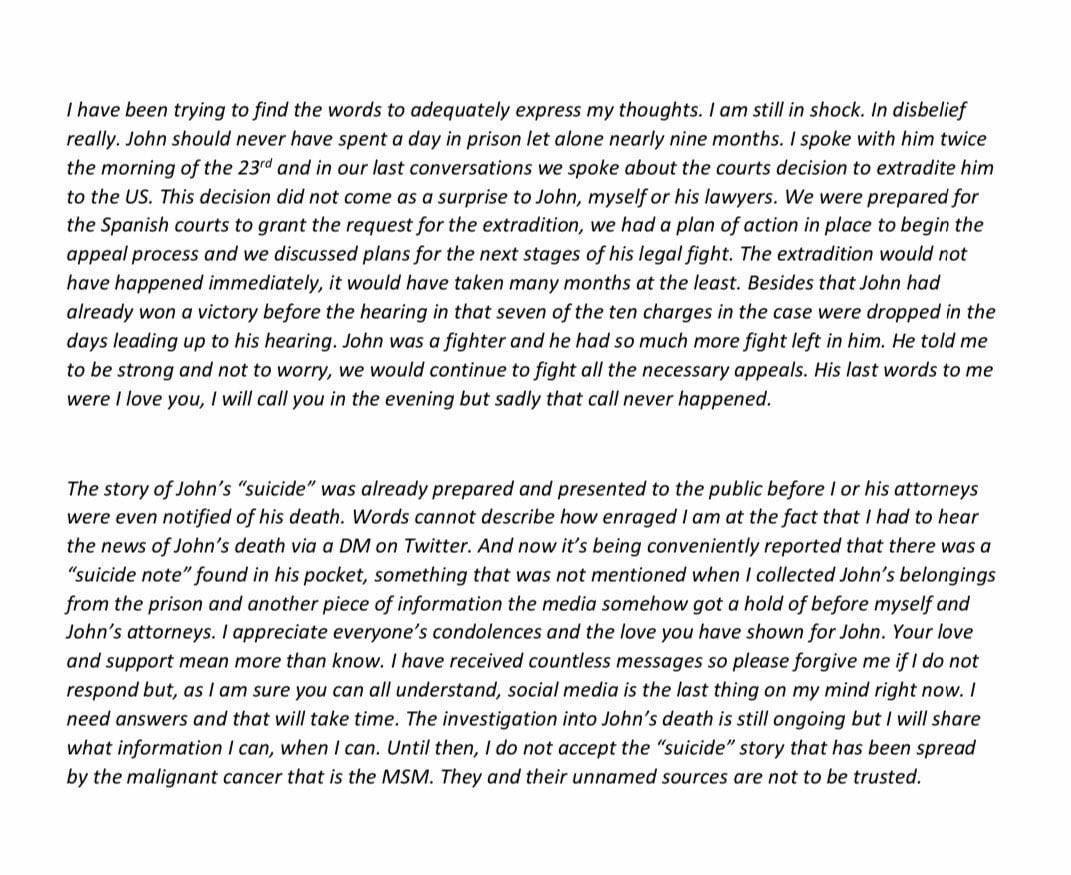 Just her description of the events after his "suicide" raises red flags.

Convenient that they formed the whole narrative and a suicide note out of thin air without his wife's knowledge.

Yep. Just like how convenient it was to find those passports at the bottom of the WTC.

One thing you can count on is how stupid and gullible TPTB really think we are.


I didn’t know he died. God Bless him and his family. I wasn’t able to get in ATS for weeks, still not sure why, possibly my phone. This is sad news 😢


Era: I just realized I somehow thought this was Bruce Maccabee. Don’t know much about McAfee but glad it wasn’t Bruce!
Need more coffee and my glasses ugh


One thing you can count on is how stupid and gullible TPTB really think we are.

they don't really care how stupid and gullible the public is. as far as they are concerned it's the official story and is exactly what happened.

if any evidence comes out to contradict the story, their cohorts in the MSM will just attack the providers of said evidence as right wing nut jobs spreading lies and disinformation. it's always been that way and always will be.

I believe most likely murdered.

The world is ruled by an elite clique of criminals and he undoubtedly knew more than they were comfortable with anyone knowing about there affairs, be they at a national or international level.

Probably they made certain somehow? that there was not going to be or that if there was that they were in a position to intercept and stop any release of harmful (to there interests) information.

Something I did not realize until I saw a documentary upon it is that the US is a far WORSE abuser of human right's than China is, FAR worse, that does NOT Excuse China for it's crimes but it does show a level of hypocrisy in the international community, for example the US has MANY TIMES more people in Prison than China does despite having a far smaller population, MANY TIMES higher percentage of it's population as well in fact the highest percentage of any nations in the world and mostly simply because they are poor such as those serving life for stealing a pair of socks under the three strikes laws.

I mean if they do that to there own people, frame a guy for exposing the truth in the form of Julian Assange what chance did John McAfee stand once he showed them he was not under there control after they had exposed some of there most sensitive secrets to him via his company.

The LAWLESS rule the world, the LAWS are to keep the rest of us in line and under there control.

This is about as "in your face" as the abuse of power and over-stepping government boundaries can get.

In non-clown world, parallel dimension, global governing bodies would want to understand how very wealthy, affluent, well-connected people (that also often have accumulated a lot of potentially damning information on other wealthy, affluent well connected people like prominent business people and politicians) end up committing suicide, despite no immediate indicators of such behavior, AND DESPITE being held in confinement by alleged law enforcement agencies responsible for the health and well-being of these people in their custody.

It's out of hand. When the other shoe drop for G-Max?

originally posted by: Realtruth
... Did he commit suicide, or was he Epstein'd? ...

Allow me to pose a similarly moot question:

This morning, did the sun rise in the eastern sky?


Does the pope wear funny hats?

Or the old standby:

Does a bear s**t in the woods?

Because for a good 50% of the population or more, they really ARE that stupid.....

Because for a good 50% of the population or more, they really ARE that stupid.....

Sadly, this is true. The level of stupidity and gullibility in the general population is astounding.


Did he commit suicide, or was he Epstein'd?

Suicide, he lived life on his own terms but faced living the end of it in captivity.

If he suspected he was going to be murdered then a smart man like John McAfee would have had an insurance policy in the form of the reason for his murder waiting to be released .... it's been a while now and the Torrent sites aren't buzzing.

'The Doctors on the news said the covid vaccine is safe so I gave it to my 15 year old and he died of a heart attack. But I still recommend everyone get it'


'No modern person needs to own a gun in today's society, we can mitigate crime with social workers'

'Masks protect you so wear them at the office, but you don't need to when your'e sitting at your desk because the air doesn't flow around ' lol

They dont give a crap what people think. He was suicided by them and they dont care one bit of peoples outrage.

They did it with Epstein. And others but i dont know names. They'll keep on murdering people who can hurt them with information.
Not one banker was jailed for the collapse a few years ago.
At least 4 witnesses against Kevin Spacey have mysteriously 'died'.

It's pretty normal for the families of male suicide victims to say that it was out of character or that the person wasn't depressed. Men frequently don't share that they have mental health problems or that they have been having suicidal thoughts.


I don't see how John had dirt on anyone. If he did he would have used it as leverage.

John supposedly murdered a man, a neighbor, and while I'm all for who-dun-it mysteries, I think John offed himself.

He'd pretty much lost it all. And he knew once America got him, he'd be locked up indefinitely. He was a free spirit that grew tired of being caged and on the run.
edit on 05/30/2021 by EdisonintheFM because: Changed my opinion.

originally posted by: AaarghZombies
a reply to:

It's pretty normal for the families of male suicide victims to say that it was out of character or that the person wasn't depressed. Men frequently don't share that they have mental health problems or that they have been having suicidal thoughts.

I agree. Dude was old and tired. Didn't want his young woman to worry.

Yep. Just like how convenient it was to find those passports at the bottom of the WTC.

One thing you can count on is how stupid and gullible TPTB really think we are.


Thing is though, the masses eat that up like cake. They love it. Believing in him being Epstein'd scares them and they don't want to be scared.


John McAfee's Wife Janice Released a Statement about his "Suicide".

Can anyone find the original statement release?