Pretoria - A Gauteng woman has given birth to 10 babies, breaking the Guinness World Record held by Malian Halima Cissé who gave birth to nine children in Morocco last month. Gosiame Thamara Sithole, 37, gave birth to her decuplets – two more than doctors had earlier detected during the medical scans – at a hospital in Pretoria last night, said her partner Teboho Tsotetsi.

In South Africa this topic has had naysayers and yaysayers in a twist for a week.

Firstly there were these claims, but then they never had a mother.
But behold, a mother did appear: 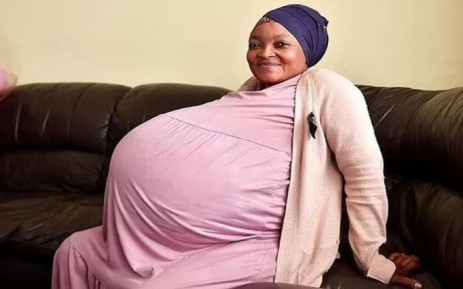 Now there are claims she is being held against her will.
www.iol.co.za...

I'd be a bit suspicious, but one thing I believe about ladies is that they don't lie about such things.
edit on 19-6-2021 by halfoldman because: (no reason given)

Halima Cissé gave birth to the nonuplets in Morocco. Mali's government flew her there for specialist care. "I'm very happy," her husband told the BBC. "My wife and the babies [five girls and four boys] are doing well." A woman who had eight babies in the US in 2009 holds the Guinness World Record for the most children delivered at a single birth to survive. Two sets of nonuplets have previously been recorded - one born to a woman in Australia in 1971 and another to a woman in Malaysia in 1999 - but none of the babies survived more than a few days.

originally posted by: Asktheanimals
Certainly explains some of the demographics of South Africa. From 12 million to over 50 in just 25 years is pretty astonishing.

Not sure where you get these numbers. When I lived in S.A in the 90's there were approximately 5 million white's 50 million black.
edit on 19-6-2021 by RMFX1 because: (no reason given)

No both your numbers are fairly the same.

It's just that Asktheanimals was going back into colonial history (which, except the Cape in SA isn't that long: 1822-1900).

But roughly 1990's, yeah it was five million whites and over 50 million blacks.

This guy could be holding the secret to fight the depopulation agenda. He must be protected.

If it were a con, you'd think they would've been able to come up with a better name than 'Sithole'.

posted on Jun, 19 2021 @ 06:48 AM
link
a reply to: BrokenCircles
No, that's actually a common surname in SA, although it's usually pronounced something like "si-thole".
(Always silent "h" in Bantu languages, in fact I have no idea why the "h" is there at all. Thus the first missionaries wrote it down.)
edit on 19-6-2021 by halfoldman because: (no reason given)

Multiple births of as many as eight babies have been known to be born alive, the first set on record goes to the Chukwu family in Texas in 1998, so 10 is not beyond the realms of possibility.

Is that the result of one "nookie session" or could it be more like a cumulative effect?
edit on 19-6-2021 by halfoldman because: (no reason given)

posted on Jun, 19 2021 @ 08:37 AM
link
a reply to: halfoldman
I’ve been following this - since it got a lot more interesting.
Seems like the public health services lost all 10 premature babies, but are trying their best to paint the mother as ‘mentality unstable’. They’re doing their best to deny that any babies were ever born, but we’ve confirmed the mother was in the maternity ward etc.

Ball is in governments court since journalists have done enough to prove they were actually born.
They just don’t want to fess up to the fact that medical negligence caused them to lose all 10.

Let’s see how this plays out.

Ever hear of the Dionne Quintuplets?

Famous case here in Canada where the Government took all the babies from the parents and charged people to view them like a side show.


Seems like the public health services lost all 10 premature babies


What exactly do you mean by 'lost' them?
Are you saying they're all dead, or that they just don't currently know where the babies are at?

This whole thing does seem to be much stranger than I had initially realized. According to this↓ article, even the husband/father is skeptical that she actually gave birth to 10 babies.

South African Woman Says She Had 10 Babies At Once, But Her Husband Is Skeptical


The family has already gotten an outpouring of support from the public. But now, Gosiame's husband, Teboho Tsotetsi, is asking that the public refrain from donating until both he and they have gotten the chance to see the babies in person.

Gosiame hasn't been in contact with anyone since the birth, reportedly for religious and cultural reasons. As a result, no one has been able to verify the birth....

Teboho doesn't want the public to feel defrauded. That's why he's asking that despite the outpouring of generosity, including donations, that the public stop until they get the chance to see the children, who are continuing to be cared for after the premature birth.

Members of Teboho's family are concerned about what is happening. They opened a missing person's case as they don't know Gosiame's whereabouts and don't understand why she isn't being forthcoming with situation. They add that her twins, who are staying with Teboho's mother, are also concerned and miss their mother.

Probably this mother is a charlatan.

However, if I was told they lost or misplaced them under the ANC's hospitals, I wouldn't be terribly surprised either.

I'm starting to lean in another direction....

So apparently, since the family has filed a missing persons report with the police, then the mother is officially considered to be missing. The husband is currently the number 1 suspect, because as far as the police know, he was supposedly the last person to see her alive.

So now his lawyer is advising him to not go meet her, because if he is out in public, then he may be arrested for her disappearance... lol

idk, but I'm beginning to think that maybe he killed her, and is just making up this entire bewildering story.

I don't like copying/pasting this much of the article, but I can't help it....


Pretoria - Teboho Tsotetsi, the decuplets father whose wife Gosiame Sithole has failed to disclose her whereabouts and the condition of their babies, has called on members of the public to stop donating money into both their bank accounts until she returns home.

In a police statement on Saturday - in support of a missing person inquiry - Tsotetsi told the police he was concerned about Sithole’s whereabouts and her safety since she told him he was not allowed to see his decuplets due to Covid-19 regulations.

Tsotetsi said he had seen his heavily pregnant wife for the last time on Sunday night when he accompanied her to the Esangweni Clinic in Tembisa, after she complained about labour pains.

Almost a week after Sithole repeatedly failed to tell him where she was, Tsotetsi said he gave the police a statement in support of their inquiry on Saturday.

The inquiry came after Tsotetsi’s family members opened a missing person case at the Tembisa South police station on Thursday.

“On June 8 2021at 00:02am, I received a WhatsApp message from my girlfriend: Gosiame Thamara Sithole, informing me that she has given birth to 10 babies. At 00:30am she informed me that they were at the Medforum Hospital. She then informed me that no physical visits are allowed at the hospital. I subsequently insisted that, as a father, I would like to come to the hospital to see our newly born children,” Tsotetsi’s statement said.

He said that on Friday, Sithole informed him that, at her request, Mediclinic Medforum Hospital had moved her to the lodge facilities of the Steve Biko Academic Hospital (SBAH) a day earlier.

Specifically, this↓ part seems the most suspicious.


“Having requested her to forward me the physical address of the lodge, she forwarded the location being: Tshwane District Hospital, Dr Savage Road, Pretoria. On Friday, June 11, at 16:24, out of concern for their whereabouts, I sent her a WhatsApp message reading as follows:" Hi baby, like I said, I went to seek the lawyer's help for being harassed by the police. They say they are investigating a case of a missing person because your whereabouts are unknown. I am currently with her*[the Lawyer], and have explained to her that I don't know where you and the babies are, but that I had an arrangement to meet today but couldn't because we had to see the lawyer for our safety. She has advised me that I should not go and see you as I had been tracked by the police, and If they get hold of me I will be arrested as I am a suspect now because I am the last person to see you. I really needed to see you but my priority is our safety. Please forward me your picture and the pictures of our babies. At 17:03, she sent me the following location of her whereabouts: "Tshwane District Hospital, Dr Savage Road, Pretoria.”


For the record, I added this part: *[the Lawyer]
everything else in the quote is copied.


I think he killed her, and started with a little lie as part of his cover story. Unfortunately for him, his little lie has exploded on the internet, and has now traveled around the world. I'm probably wrong on that, but at this point, I do think it is a valid possibility.


eta: It seems that everything regarding her exact location, is coming from him, and it keeps changing, yet no other family members have heard from her. It's just him saying, "She said she was here..... but now she told me she's somewhere different..." etc..
edit on 6/19/21 by BrokenCircles because: (no reason given)