What's Up With These 4 Dead British Airways Pilots?

There’s an easy way to know when a narrative is being fabricated. One needs only look closely at the wording of statements and oftentimes the subsequent fact-checks to see when a coverup is in process. Such is the case with British Airways and their claims that four pilots who have died in one week are not “linked.”

Reuters quickly came to their rescue and did a “fact-check” on the claims that are circulating across social media. They, of course, determined that it was “false” but just like the British Airways statement, Reuters conspicuously avoided the topic of vaccines.

First, let’s look at the wording of BA’s Tweet:

“Sadly four members of our pilot community passed away recently. Our thoughts are with their family and friends. However, there is no truth whatsoever in the claims on social media speculating that the four deaths are linked. Julie”

So, Reuters is also jumping to the rescue to 'fact-check' the idea that these pilots' deaths are somehow linked by calling 'FALSE' the suggestion circulating on social media, that BA is in crisis talks with the British government about allowing "vaccinated" pilots to fly...and British Airways has also denied these deaths are in anyway linked.

One would assume that is the end of the story...Right?

But how, might theses highly and unusually coincidental deaths HAVE been linked?

Well, apparently, these pilots HAD just been "vaccinated"...in fact, in the case of 3 of the 4 dead pilots, it's already been confirmed that they had...and, as pointed out above, these 'fact-check' statements barely address "vaccinations" or the fact that:

the so-called “Delta Variant” began spreading around the country like wildfire. Scientists have speculated that the new variant not only circumvents the minimal protections offered by the vaccines, but in some cases seems to be more potent on those who have been vaccinated.

VALIDATED photo of the four pilots from social media: 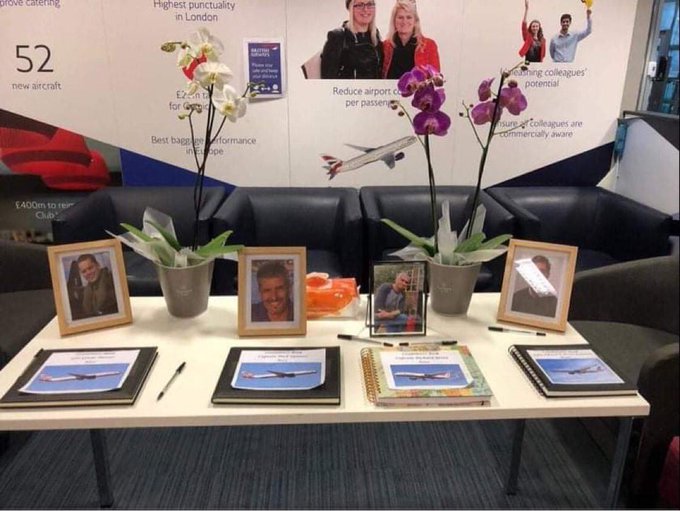 Then there is THIS:

A recording (unconfirmed) of a male discussing the deaths is circulating social media.

TEXT of audio (within source):

“They’ve had the third BA pilot die in the last seven days, yeah?
Third pilot dead in the last week,” says the man heard in the recording.
“The first two guys were in their forties and fifties; this guy, mid-thirties, perfectly fit, no underlying conditions.
He gets his second jab and he’s dead within days, exactly the same with the first two.

“Because of this, BA are now in crisis talks with the government about whether to allow vaccinated pilots to fly.
The issue with that of course is that about 80%, according to my friend in BA, 80-85% have been injected.”

Again...Reuters 'fact-checked' the one element of this dealing with "crisis talks" and uses it's 'FALSE' designation to dismiss the entire idea that the pilots being "vaccinated" had anything to do with this highly-unusual grouping of deaths.

So, WHAT is the real story here, ATS?

We have a series of 4 dead relatively young, active, BA pilots...all dying within a very small span of time.
At least 3 of the 4 had just been "vaccinated".
Reuters and BA say their deaths are all just a crazy coincidence.

Is this just an unusual coincidence?
Or, is there an actual coverup in progress.

Cover up is the understatement of the year for what's going on....

Think there is a connection between reaction to the vaccine and time spent at altitude?

Think there is a connection between reaction to the vaccine and time spent at altitude?

I wondered that, as well.

A lot of people have just been vaccinated all the same, no reason why the 4 pilots would not be in the same boat.

Looking at the different age groups they may also probably have received different vaccines from one another which adds even more variables to the mix.
edit on 18-6-2021 by andy06shake because: (no reason given)

All good points.
STILL...unusual concentration of deaths in a relatively small, related group.
Usually, that is considered a 'Red Flag'.

kwakakev
+12 more
posted on Jun, 18 2021 @ 08:53 AM
link
Sounds like the fake news has its coincidence theorists at it again. After years of it do you really expect them to change their tune?

I heard or 3 the other day, now 4... Not good. A couple of countries have banned the vaccinated from flying, higher risk of blood clotting. The insurance companies are stressing out over the numbers of vaccinated dying and getting blood clots during flights, trying to get out of it.

Looks like quite a pickle all these lies are weaving. Sooner or later the truth does come out.

Does seem to tick the wtf box.

Further study and all that jazz might indeed be in order.

I saw this on liberty daily this morning and it really disturbed me, the fact they are blowing it off is equally terrifying. Why can't people see what's really going on?

I saw this on liberty daily this morning and it really disturbed me, the fact they are blowing it off is equally terrifying. Why can't people see what's really going on?

Imagine the fallout for BA and the airline industry...if these pilots died because of the "vaccination"...with 85% of them already "vaccinated".
It would be devastating...and definitely need to be covered up.

Hopefully, pilots won't be dying at the controls with hundreds of passengers onboard.
edit on 18-6-2021 by IAMTAT because: (no reason given)

I thought of that, too! Yeah, I hope the last part of what you posted doesn't happen, unfortunately, if it is exposed only a few will question while others will scream fake news. Maybe if it comes from a Democratic leader they may listen? I have mentioned to my husband the other day that we truly live in a scary world.

originally posted by: Terpene
It's obviously because now that they are out of the 5g grid the nanobots from the jab don't work properly anymore...

Your empathy for the dead and their families is breathtaking....

So I assume they have not yet released any official cause of death for any of these pilots?

The four pilots being pilots absolutely doesn't link
them together ever never did. False! You're all liars
and we're the Gods of truth justice and tooth decay.
edit on 18-6-2021 by Randyvine2 because: (no reason given)

nfflhome
+4 more
posted on Jun, 18 2021 @ 10:12 AM
link
OR maybe they were required to take the vax by British Airways
and now British Airways is trying to avoid legal action.
Which is what I hope the situation is.
Unleash the lawyers.

Does seem to tick the wtf box.

Further study and all that jazz might indeed be in order.

Baby steps. You are getting there. Nobody is saying they know definitively what if any link may be, but it's odd enough to look into before we are bombarded by fact checkers telling you how to think. Eventually, you may start to see why some have an issue with the fact checkers. One can only hope.

So I assume they have not yet released any official cause of death for any of these pilots?

Not that I've read so far.
I'm hopeful the true cause of death of these unfortunate pilots will be released soon, in order to put this to rest one way or the other.
RIP brave conquerors of the sky.
edit on 18-6-2021 by IAMTAT because: (no reason given)

A leaked email from Dr. Fauci suggests that all 4 pilots probably ate raw bats at a Chinese wet market.

posted on Jun, 18 2021 @ 10:30 AM
link
Wow just following a thread of thought... imagine needing a passport for vaccine status as you need to be unvaccinated to fly, yikes!