page: 1
23
log in
join
share:
BorisBadInOff
+1 more
posted on Jun, 12 2021 @ 12:12 PM
link
I am beginning to see signs that the divisions caused by propaganda is growing deeper, and with more gusto. It feels like the battle lines are being drawn. Which side do you belong to and would fight for your freedoms? That is what they want. To keep increasing the division until it sparks an armed civil war. That will depopulate a lot of meat eaters.

This is well written essay by a commenter on some other website probably written on the eve of 2020.

Allen Carlson December 3, 2019 at 5:01 pm If you are a true historian you can see that what is happening is a direct result from the civil war and the things that took place from the propaganda used to fuel the first to the propaganda being used today to fuel another. First off all one needs to do is read Lincoln’s 1861 inaugural speech to see that slavery had nothing to do with the start of the civil war. What Lincoln did was usurped the Constitution and took it upon himself to bypass congress and send troops to the south to declare war because he wanted his “more perfect union” and could not stand the souths lawful secession under our 10th amendment but how does Lincoln have anything to do with whats happening today? Well he was assassinated before rescinding martial law. Meaning the Constitution was still suspended in 1868 when Andrew Johnson his vice president declared insolvency because the north couldn’t afford to pay for the war and sold us all to the bankers and Andrew Jackson confirmed it in the banking act of 1871 that we are all collateral “chattel for the debt of the country’s bills (debt slaves) we essentially lost our country and all of our liberties to the bankers which led to enslaving an entire nation with future Acts of Congress such as the “trading with the enemies act” the incorporation of the UNITED STATES title 28 USC 3002 and the “federal reserve act of 1913” which ended our lawful money of gold and silver coin. And with the help of FDR declaring insolvency again in 1933 and “the gold confiscation act” gave the bankers the helm to do what ever they want with us. The biggest fraud of history has been kept quiet because of the propaganda used to keep Americans occupied with hate and division for one another so they dont ever catch on to what’s been done to them. It’s not a Democrat or Republican thing, it’s an uneducated American thing and it’s a all about controlling a people thing for corporate profit thing! Far worse than the King of England in the revolutionary period that caused our founding fathers to declare independence from the King and his way of doing things. Yet because Americans have kept their eyes on the intentional distractions and not on the law, the corporate puppets in Washington DC have created a system of deceit through the public schools (indoctrination centers) and kangaroo courts courts designed to generate revenue from anyone not subordinate to the unlawful statutes passed by congress and enforced by a paramilitary police force designed to keep the people in fear so that the banking cabal that truly runs America and the rest of the world for that matter can continue it’s divide and conquer tactics to eventually install a 1 world government and currency and complete their goals of world domination and depopulation! I seldom ever comment on things but i feel the need to wake people up if thats even possible with everyone focused on the left and right divide who cannaot understand that both wings are connected to the same bird and that they are being played as human pawns against one another and are going to eventually be in the streets killing themselves for the very institution that’s fueling the division. Unless people see what is intentionally being done to them asap 2020 is going to be an absolute bloody mess and the complete end of what the founders labled the “great American experiment” and life as you know it

Intelligent fellow. Isn’t it grand how we are made to believe that the civil war was because of slaves. It’s so easy to change the narrative.

TPTB won. Not enough people think for themselves. They are perfectly happy allowing the evil ones to divide them.

BTW, might want to edit your title to ‘plan’ instead of ‘plain’.


Great thread Boris, thought the pic below did a good job of summing things up (especially the bankster in the sky). 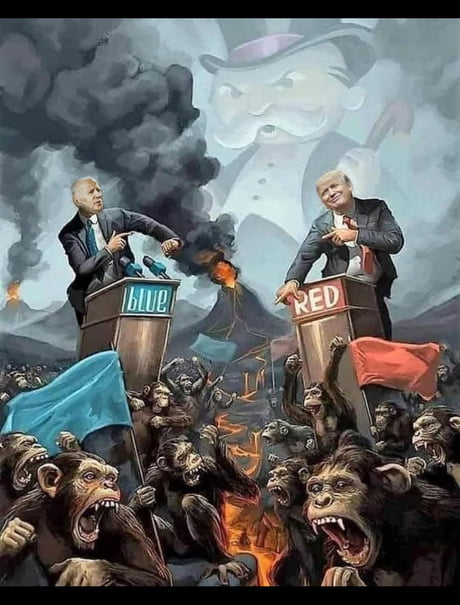 I encourage anyone who thinks ‘freeing slaves’ was the catalyst for the war to read the numerous diaries, letters, and biographies of the soldiers themselves. None of them talk about keeping slaves, but almost all of them talk about a tyrannical government that was out of control and no longer served their interests.

But since history is written by the victors, average joe thinks ermagawd racist southerners fought a war to keep slaves.

I’m not so sure about 1861 happening again though. Liberals hate guns, conservatives own many guns and know how to use them. An 1861 scenario repeating itself would be a very short lived one.
edit on 12-6-2021 by Cancerwarrior because: (no reason given)

posted on Jun, 12 2021 @ 02:34 PM
link
Creepy Joe and company are falling all over themselves to provoke civil unrest, create some sort of race/class war, create violent chaos. This way, they can step-in to save the day, by martial law sorts of methods, the goal to grab guns, dictate politically correct thinking, etc. They would like to overturn that pesky Constitution. Usually deceptive, Creepy Joe has even said there's nothing "written in stone" in the Constitution, despite American inalienable rights from God, not man, and words such as shall not "infringe" on freedoms. Shows you just what an un-American monster Creepy Joe is, by his own words. The leftists actually hate everything America is, of the Founding Fathers, and are even the worst of racists, brainwashing and pimping black people to behave as radical, black racists, for violent ends the left would find useful.

They have been drooling all over themselves to have a, "Papers, please!" Nazi dictatorship and segregation system, exploiting the Covid business, with wetdreams of vaccine passports, which they can turn into the likes of faithful leftist party passports, etc. It's incremental totalitarianism they're trying to work.

It's the same old story, same old evil trickery, that leads to dictatorships. It's only by crisis they can try and justify extraordinary measures, hence shred Constitutional freedoms for the evil, changing times they created! Like that witch Hillary Clinton said, "Never waste a good crisis," which I think was quoting some commie philosopher she adores. The thinking speaks for itself, full of evil and guile, manipulation, this their mindset, and this the opposite of the Founding Fathers and a patriot's mindset, that would guard freedom.

"Necessity is the plea for every infringement of human freedom. It is the argument of tyrants; it is the creed of slaves."
- William Pitt (the Younger), Speech in the House of Commons, November 18, 1783

"They that can give up essential liberty to obtain a little temporary safety deserve neither liberty nor safety."
- Benjamin Franklin, Historical Review of Pennsylvania, 1759

By the way, we have a 2nd Amendment, to be a last resort to combat wicked and corrupt government, that becomes the enemy of a free people. It's no coincidence Creepy Joe and company want your guns. (The gun grabbers are such morons, like somebody said, of the liberal mind, or lack thereof, "Drunk drivers are killing too many people. We need to get all the sober drivers off the road.")

At the outbreak of the war the South had the third largest economy in the world.

Someone asked Lincoln once why he didn’t just let the South go and form their own nation.

He was quoted as saying, ‘then who will pay for the government?’

There were actually many reasons, but racist slave owners is a simple explanation, and simple people like simple explanations. Lord knows there are plenty of simpletons around nowadays.
edit on 12-6-2021 by Cancerwarrior because: (no reason given)

posted on Jun, 12 2021 @ 06:14 PM
link
My first post. Thanks to all who have provided so much information and many ideas that brought pause to my everyday. Yes, I have been reading from behind the curtain.

Divide and Conquer in 2 steps:

Which groups GENERALLY have the most guns and know how to use them? 1) The Blue (officers) who also tend to fall into the other “Blue” group: 2) Blue Collar people and 3) Blacks

These groups also GENERALLY tend to be anti-“vauxxers”, skeptical of TPTB, and know that most “conspiracies” start with at least a nugget of truth. So these groups are the Rebellion against TPTB, NWO, The Great Reset, etc. et al

Now if you were apart of TPTB, wouldn’t you want to divide and conquer the opposition while making it look like the Rebels did it all on their own?

I present to you, dear Readers, the “Black & Blue Wars”:

1) “Defund the Police” brought to you by ANTIFA and BLM. Don’t know yet what the trigger will be but think Portland in every big city. Result: death on both sides; destruction; loss of careers; imprisonment; loss of rights (voting); Domestic Terrorists; Racists; Killers - No “side” wins. The Tik-Tok mens’lips twitch

2) “Black Lives Matter” & Reparations - who does this piss off more than Blue Collars!?! In a non-politicized world, we can agree that ALL lives matter and the child should not have to pay for the sins of their father. - Result of impending violence: death on both sides; imprisonments; loss of careers; deemed Domestic Terrorist and loss of rights/liberties. No “side” wins. The Tik-Tok mens’ lips twitch yet again.

The opposition took itself out.

These Black & Blue Wars lend credence to a stronger push for “Everytown for Gun Safety”, and perhaps Martial Law.

We are just jelly beans gumming up the People Mover. Don’t let them switch off your cardioplate (or is that option only for the “vauxxinated”?)

We need to Resist and ReGroup. Easier said than done.

originally posted by: Mandroid7
Governments make the rules. Not bankers.
Your over the decoy imo.
The fake enemy.

originally posted by: xuenchen
I always was taught the only way to have a Global Civil War is to only use Countries between the Tropic of Cancer and the Tropic of Capricorn 😉


originally posted by: xuenchen
I always was taught the only way to have a Global Civil War is to only use Countries between the Tropic of Cancer and the Tropic of Capricorn 😉

Civil wars around the world within the same time frame.