LISTEN UP - We have to learn how to separate Americanness, America, from whiteness

page: 1
20
<<   2 >>
log in
join
share:
matafuchs
+2 more
posted on Jun, 9 2021 @ 02:46 PM
link
I wake of the recent Coke statement of being less white CRT is just getting out of hand. People truly believe the talking box called TV. This week someone on the Morning Joe talked about their want to remove whiteness from America.

The NYT columnist Mara Gay states that there should be no reason to use the government in place to make decisions and that Democrats should just do it as they see fit. A true Progressive attitude.

You know, it’s really concerning to me that the Democrats haven’t just gone ahead at this point and said, ‘We’re doing this on our own in terms of getting a commission together to explain to the American people how we allowed the insurrection to take place in the Capitol.’ I think that really needs to move forward swiftly,

We are all used to this. No matter your color, creed or religion. The Progressives create the agenda, blame anyone who disagrees and does what they want anyway. The next line though is what really got me.

I think that as long as they see Americanness as the same as one with whiteness, this is going to continue. We have to figure out how to get every American a place at the table in this democracy but how to separate Americanness, America, from whiteness.”

“Until we can confront that and talk about that, this is really going to continue,”

So what she is stating is that we have to separate White People from America. Now, the reason for this. Flags. I swear. Flags. The American Flag. At a time when the Pride Flag is being flown we have someone who is 'scared' of the American Flag.

I saw, you know, dozens and dozens of pickup trucks with [expletives] against Joe Biden on the back of them, Trump flags, and in some cases, just dozens of American flags, which is also just disturbing, because essentially the message was clear, it was: ‘This is my country. This is not your country. I own this,

Now for years I have heard "whose streets..our streets" and that is applauded by this same journalist. Like when she retweeted this article from her paper. Please access the page and look at the pictures. Some show protest but many show violence. She is not afraid of this so why an American Flag? and the calling to remove whiteness from America? 2000 cities had George Floyd protests and she is scared of rednecks on....wait for it...Long Island?

IN the article it normalizes violence as long as there is some peace...


In most cities, the demonstrations were peaceful.

Demonstrators in some cities were shoved and pummeled with batons. They were sprayed with chemicals, their stinging eyes soothed by milk. They were struck with rubber bullets that left bruises the size of baseballs.

Symbols of a nation’s racist past were toppled, crushed, defaced and beheaded.

Those who support 45 do not believe in Democracy? It is a talking point that needs to end and they want to do it by claiming they are a minority. More voters for the second term than 44. Than anyone second term POTUS. Ever.

Because, you know, the Trump voters who are not going to get onboard with democracy, they’re a minority. You can marginalize them long-term. But if we don’t take the threat seriously, then I think we’re all in really bad shape.”

The Progressive media continues to try to silence those who do not agree. Identify those who should be hated. Alienate those who do not fall in line. Dox those who would speak up. Keep it up and those folks with 'whiteness' will leave your party also. 45 pulled in the highest GOP minority and female vote ever. Even lemmings can only take so much.

Yeah...well I'm Black Irish 2 generations off the boat...does that count?

If I could paint myself whiter than I already am, I would do it.
My whiteness makes me great.

I just can’t put any credence to what these assclowns say anymore.
They are just cartoon characters to me now.
edit on 9-6-2021 by RazorV66 because: (no reason given)

Only if you're a Black Liberal who constantly plays the victim. Black Conservatives don't count.


I have an honest question for them : EXACTLY what do they want to to stop doing that makes me "White" ? I go to work, mow the grass, cook, spend time with my wife and kids, go fishing, etc...

Which of those should I stop doing ?

posted on Jun, 9 2021 @ 03:18 PM
link
The majority of racist in the US right now are Democrats and their supporters. I base that on their own actions, so there really isn’t anything you can do to address the OP. Racists will continue to be racists.

posted on Jun, 9 2021 @ 03:33 PM
link
Pick up Trucks! Oh, the horror! A symbol of oppression. It shows you how out of touch she is with America. Pickups are the best selling vehicle in the country but of course, you don't see many in Manhattan. Funny story from a few years ago pointing out that journalists barely know anyone who owns a pick up truck... which shows how out of touch they are with the rest of the country.

Journalist Don't Know Anyone Who Owns a Pickup

Jan. 6... I guess we are going to ignore all the leftist riots and violence that took place all year in 2020?


These people are truly in a bubble. 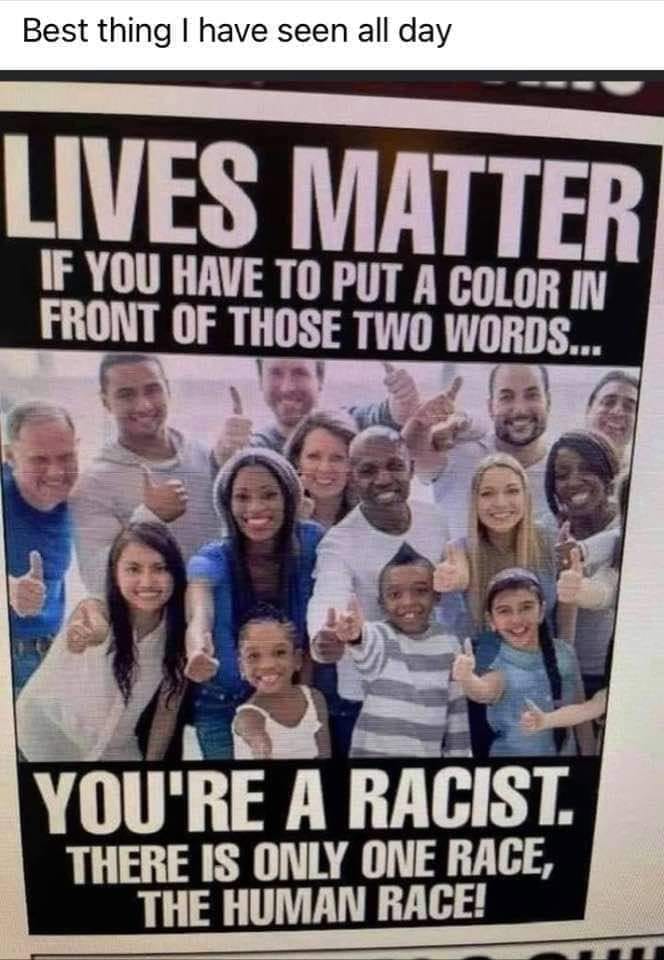 
“According to the intelligence community, terrorism from white supremacy is the most lethal threat to the homeland today,” Biden said. “Not ISIS. Not Al Qaeda. White supremacists.”

and continues the lie...

Biden revisited the massacre of the black community in Tulsa to show the long history of white supremacists in the country — comparing it to the clash between the protesters in Charlottesville.

“What happened in Greenwood was an act of hate and domestic terrorism, with a through-line that exists today,” he said. “Just close your eyes and remember what you saw in Charlottesville four years ago on television.”

I understand not liking the BLM organization, but the term was not created out of racism towards whites, but rather to say "we matter too".

But yet... Trump supporters are white supremacy.

True, but its been co-opted from the first brick thrown into a window.

So as with other symbols of hate it needs to go that way.

Sorry native peoples across the globe, Germans 80 years ago used your symbol for murder now its verboten.

Holly crap your lack of knowledge about why that is is astounding.
A good start would be to look up city building plans from the 60's.
Then maybe you can grasp the gravity of the situation.

Holly crap your lack of knowledge about why that is is astounding.
A good start would be to look up city building plans from the 60's.
Then maybe you can grasp the gravity of the situation.

I haven’t heard one BLM protestor complain about building plans in the 60’s. All I hear is defund the police! Black Lives Matters! And a few other racist chants. You must be that virtue signaling liberal we see so often.

Most of us will even admit what the problem is.

What can be done about it?

The solution is what we need to work on.
edit on 9-6-2021 by TrulyColorBlind because: Added one extra point.

posted on Jun, 9 2021 @ 05:00 PM
link
Who remembers when being Jewish was anti German? What’s going on with all the BS race stuff I see parallels to things I’ve read about pre ww2 Germany and the lead up to the Holocaust, considering before the mass murder all the government propaganda and anti Jewish rhetoric etc etc these people today are the 4th reich.


I understand not liking the BLM organization, but the term was not created out of racism towards whites, but rather to say "we matter too".

Then why is it having the opposite effect?
edit on 9-6-2021 by Randyvine because: (no reason given)