posted on Jun, 8 2021 @ 11:56 PM
link
I heard a bit on the news today that there had been a glitch in internet service this morning. I was surprised at the amount of information that was put out in the blips and blurbs. Since I was busy with other things, I hadn't had a chance to look up the nitty gritties until now. I don't know if it's been posted or not.

The websites that could not be reached also included Reddit, Twitter, Spotify, Target, Google, and the United Kingdom’s government website, according to downdetector, an online platform that provides realtime information about the status of websites and services.

The global glitch was caused by an outage at the cloud computing service, Fastly. The San Francisco-based company operates a content delivery network service that many websites use to help speed up the loading of their web pages. Fastly first acknowledged a problem just before 6 a.m.

Cloud computing services provider Fastly announced early Tuesday that it’s experiencing a technical issue. The firm said on its website that it’s investigating the issue. But David Vaskevitch, the former chief technical officer of Microsoft, said the outage underscores how interconnected — and thus vulnerable — online systems are. He likened it to the power grid, where one downed transformer can shut down power supply to whole towns or cities.

“What this really means is you always have to have in the back of your mind, ‘Yes, I’m going to depend on the internet, but what am I going to do if it’s not there,'” he said. Vaskevitch pointed out that there aren’t many major content delivery network providers — likely fewer than 25, he said. When one goes down, he added, that means many websites will likely be affected. “I hope it doesn’t happen again, but I know it will.” 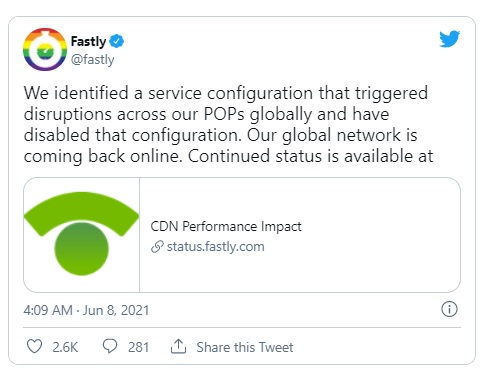 
Here's another clip from Reuters:

Thousands of government, news and social media websites across the globe were coming back online on Tuesday after getting hit by a widespread hour-long outage linked to U.S.-based cloud company Fastly Inc (FSLY.N).

High-traffic sites including Reddit, Amazon, CNN, PayPal, Spotify, Al Jazeera Media Network and the New York Times went down, according to outage tracking website Downdetector.com. They came back after outages that ranged from a few minutes to around an hour early in the morning in the United States but middle of the day in Europe.

"Our global network is coming back online," Fastly said.

One of the world's most widely-used cloud-based content delivery network providers, the company earlier reported a disruption from a "service configuration" and did not explain.

Typical service configurations for a cloud service provider can include updating security rules to protect information, or instructing a server to refresh the contents of a news site before serving it to a customer, said Andy Champagne, senior vice president at Akamai, a cloud service company.

A simple typo can be propagated to thousands of servers and cause disruptions, he said.

Many of the websites affected earn revenue from digital advertising. Worldwide, websites lost over $29 million in digital ad revenue per hour during the outage...


Since there are only about 25 cloud companies and 5 or so of them carry the bulk of the 'cloud' operations this could have been a much more serious situation. With the steep increase over the past few years in hackers and ransomware activity, it's scary to think how fragile the internet is. With the warning that “I hope it doesn’t happen again, but I know it will.” it's truly frightening to think of possible consequences of future internet service interruptions. For people born and businesses created in the last 20 years that have only know operations on the current level of the World Wide Web and internet function, I can't imagine how they would carry on in the event of a shut down for several days or weeks.

And what happens if it does shut down for several weeks? It's hard for me to imagine that the lack of internet operations could have such global consequences that could crash economies and kill businesses in a short time. No thunder and lightening, fire or brimstone, earthquakes or tornadoes..... just a small paragraph of code can literally destroy mankinds way of life.

I know many like me could get by probably even for a good long while but that's not my point here. I'm disappointed that the human race has become so dependent on a system that is easily compromised and could negatively affect so many. This had global impact for one hour and $29m in digital ad revenue was lost. Just shows you how much ad revenue is generated per hour though. Yes they recovered, and rather quickly but that might not be the case next time.

I don't think I can fathom the implications of not having the internet services and access could create.

Here's another point that concerns me. What I posted from just those two news sites is similar to many other articles circulating and is alarming on the amount of information that was released. I suppose if someone were searching for info they could easily find it but I had no idea of any 'behind the scenes' of the cloud and pretty much thought of it like the Wizard of Oz. The big curtain, or cloud in this case, wasn't something easily detected or jarred and I really don't use it or think about it. I have to wonder if all the public information pertaining to this particular event isn't dangerous in the big picture. Yeah, yeah, I just added to it but, I'm only sharing what was already exposed and shared to and by millions of people on this planet.

I also have to wonder about this little nugget from the Reuters article:

Shares of New York-listed Fastly were up 7.7% after being down nearly 4% in pre-market trading.

Now I'm not saying this whole thing might have been a plan to generate some interest and money but hey, my mind did go there. I'm getting ready for sleep mode but I wanted to get this posted. And maybe this isn't a big deal. But looking at the near crisis last week was an eye opener.

The Colonial Pipeline, which carries almost half of the East Coast's gasoline, shuttered its network overnight due to a ransomware attack.

BAM! I mean, that's how fast the chit hit the fan.

Scientific America's site was down last night. That's the only one I know about.

I expect to see more interruptions on a lot of things the next few months.

Its all coming apart at the seams.


They're testing the waters.

The fun has already begun..

The more complex the system, the more inconvenience it will cause.

posted on Jun, 9 2021 @ 02:02 AM
link
I posted about this last night (not a duplicate thread) and heard it was due to Fastly. Thankfully reddit came back up.

But at first it did have me wondering, how easy it might be to take down multiple websites at once, just due to the services they utilise. Kinda worrying, as more and more opt for similar things.

posted on Jun, 9 2021 @ 03:35 AM
link
If you think along the lines of logical progression, the shuttering of online businesses isn't as bad as one would think. The idea behind the cloud services is speed. The sites would be able to continue to exist but would have to revert to shared server based web delivery.

The thing that worries me is losing the ATM network. Imagine if nobody's cards worked in stores, at gas stations and online purchases. Imagine everyone having to physically go to the bank for cash. Now add it the people that use online only banks and have fortunes tied up in crypto.

That would be doom to sink one's teeth into.

originally posted by: buddha
Why did ATS keep this story off the site as long as they did?
and the name? "ERROR 503 Service Unavailable"
did you use that to sneek it past them?
or did you just get lucky?

"News" on ATS is 100% user driven. If no user thinks something worthy of posting, is doesn't get posted. On the other hand, this is why significant events often get posted multiple times.

Or, maybe ATS is gang stalking you ...

Maybe the one who would had posted thought the whole internet was down?

Or maybe they wanted better resolution to the story other than “so this thing happened...” and waited to find out. One on my first threads on here was about the Real ID Act back in 2006 maybe...I still do not have a Real ID although this year maybe...

originally posted by: buddha
Why did ATS keep this story off the site as long as they did?
and the name? "ERROR 503 Service Unavailable"
did you use that to sneek it past them?
or did you just get lucky?


You mouthed off and missed it, I presume.

We talked about it, you're just late to the party. No door prize for you.

I don't believe ATS "keeps" news off it's site. It encourages news, discussion about current events, conspiracies, items of interest etc. The title was my choosing.

I was surprised that I didn't see anything about it here, I must have missed Jerich0's thread. But in my little mind this is a BFD. Did you consider posting a thread about it?

originally posted by: jerich0
Thankfully reddit came back up.

I have read nothing about the root cause on this but it reeks of a dns problem.


originally posted by: jerich0
Thankfully reddit came back up.

I use reddit for valid means, not to talk smack about life.... you know, that kid of thing happens.