Kamala and Her Border Mexico Guatemala Total Failure - or was it 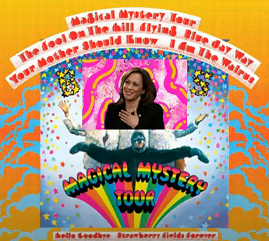 After months, Kamala finally made a move to contact somebody about the Border crises !!

She decided to go to Guatemala and Mexico and meet the leaders there to discuss the problems.

With all the bazar bulls#t coming out before, during and, after the "Meetings", the average person would be convinced the whole thing was a flop.

But don't be fooled so easily.

This is just the cover story for the behind the scenes arrangements and payoffs.

Thousands of migrants and millions of dollars of illegal contraband is coming into the U.S. every day unchecked.

The Cartels are getting tipped off as to where the best unguarded crossing points and service routes are.

The whole deal is a massive payoff party.

Even the Guatemala Leader is in on the gag with his comments ROFLMAO.

Don't be fooled by the Democratz hoodwinking !!

Everything, Everything is ass backwards 🤣🤣

Vice President Kamala Harris claims the current crisis on the U.S.-Mexico border is largely the result of climate change and the economy. The president of Guatemala, Alejandro Giammattei, disagrees.

In April, U.S.-Mexico border detentions reached a 21-year monthly high when over 178,000 migrants illegally crossed the border. A number of these unaccompanied minors and families who cross the U.S.-Mexico border come from Guatemala, El Salvador, and Honduras.


Vice President Kamala Harris addressed the people of Guatemala Monday during her first official trip outside the United States; saying illegal immigrants will be “turned back” at the US-Mexico border.

“The goal of our work is to help Guatemalans find hope at home. At the same time, I want to be clear to folks in this region who are thinking about making that dangerous trek to the US-Mexico border: Do not come. The United States will continue to enforce our laws and secure our border,” said the Vice President.

LINK--> HARRIS: ‘I Believe That If You Come to Our Border, You Will Be Turned Back’

Listen to Kamala and her Bulls#t . . . .
and the phony look on her face and speech delivery roflmao..
HARRIS: ‘I Believe That If You Come to Our Border, You Will Be Turned Back’ roflmao

Another case of "don't believe your lying eyes" just believe what we say to you.

originally posted by: underpass61
a reply to: xuenchen
The Guatemalan people weren't too happy with her appearance -

originally posted by: underpass61
a reply to: xuenchen
The Guatemalan people weren't too happy with her appearance -


LMAO
Even Guatemala knows the truth.

How stupid are the people that believe this thing??

How stupid are the people that believe this thing??


Real stupid.
They call themselves Democrats and Democrat supporters.

Most guatemalans think orange man bad. Yes, they don't really know why, but it is how they feel.

what her cookies didn't put a smile on everybody's face?
i thought for sure they would.

originally posted by: inosomthingudontno
As a critical thinker I am sure you are full of ####. Most of you are.


By most of us you mean guatemalans?

I live here and I have never heard anyone say anything pro-Trump. Honestly everyone is distrusting of the US gov at some level, regardless of who's admin it is. Trump just made people who had no stake in the game talk crap about Trump.

Sorry if my observation doesn't live up to whatever expectation you had, if you even really had one.
edit on 7-6-2021 by daskakik because: (no reason given)

what her cookies didn't put a smile on everybody's face?
i thought for sure they would.


That's what happens when she passes out faceless cookies !! 🤣

I'm kinda confused by the 'I believe' part.


It's just an odd and completely unnecessary thing to say, especially when it's a pre-written speech that's re-read numerous times beforehand. Lots of people believe lots of things, but that doesn't make it true. idk, it just seems weird to me. You'd think she would wanna be firm when making a statement such as that.

posted on Jun, 7 2021 @ 09:21 PM
link
a reply to: BrokenCircles
She can't be firm because people who reach the border asking for asylum are not all turned back and she has no way of knowing how many will or won't be.

She does seem to be saying that the chances are slim.

Yeah but that's supposedly not the message they're wanting to send.

The most disgusting thing about this administration is that they all say the border is closed while keeping the border open.

They openly lie, the media lies with them, and the sheep eat it up.

posted on Jun, 7 2021 @ 10:20 PM
link
a reply to: BrokenCircles
The truth is that it all depends where someone is from. The reason the immigrant caravans originate in honduras is because they have TPS. Their chances are not slim.

Guatemalans don't have TPS so unless they have a valid asylum case and can prove it, chances are they will be turned back and that is just the truth.

Guatemalans already know this. I know someone who left about 3 weeks ago. He sold his car to scrape up enough money to pay a coyote to take him across illegally because he knew every other avenue is closed to him. He didn't need Kamala to come down and tell him that.

posted on Jun, 8 2021 @ 06:09 AM
link
Can you imagine having a serious conversation with someone, and all of a sudden they just blurt out some completely unrelated non-sequitur? All for the purpose of trying to sneak in a sound-byte for the media, to embolden the propaganda and charade?

What a bunch of complete BS!

You know, young children learn very quickly there is one word which works as a response to absolutely any statement..."Why?" No matter what a person says, a response of..."Why?"...fits perfectly as a response. So how is this relevant? Well, "Climate Change" is the exact same. The words are designed to be used in absolutely any situation. No matter what someone says, you can answer with "Climate change" as part of the response.

Just try to think of a question or statement where you can't use "Climate change" as part of the response...