So since it's the status quo we ought to just accept the way it is, or what exactly are you saying here?

As you well know, my comment neither states nor implies any such thing.

In fact I draw no conclusion at all. Let alone the one that you're trying to shoehorn in.

To elaborate, people are getting bent out of shape because Bing bent the knee to China, but history tells us that this is neither a new phenomena nor one limited to China. Indeed, most of the knee bending happens in regards to Western countries and is down to western sensibilities. Hence my referencing of a very bad man that won't auto complete to "did nothing wrong" because Google deliberately excluded it form their algorithm.

So, rather than throwing a hissy fit over this one incident your energy would be better spent looking closer to home at the great many incidents that western search engines have censored western content due to western sensibilities.

Hypocrisy is all the rage right now.

originally posted by: zosimov
I've often wondered what happened to the operator of that first tank. I imagine he did not live a long and healthy life.

You're thinking of Russia. Russia is the one that executes grunts over things like this.

If the man in the tank were following orders he'd probably be OK. It's not spoken about often but China actually sent two waves of troops into Tiananmen Square. The first group soldiers from the local garrison. They were a little heavy handed but they didn't massacre anyone. They were confused and uncertain what to do, they didn't want to fire on civilians and withdrew quickly. Some of them were overrun and abandoned their weapons.

It was the second group of troops who were drawn from a much meaner garrison from outside of the area who came in later on and killed all of those people.

It's also not often spoken of but there were protests in several cities, not just in Beijing, and while the student demonstrators get all of the attention many of the original demonstrators were actually pro-communistsocialist demonstrators who wanted China to abandon free market reforms that had recently been made. Particularly effort to run steel mills using more westernized models. They weren't interested in democracy. They wanted to bring back collectivization.

originally posted by: zosimov
Oddly enough, I was in 5th grade when this incident occurred and I remember a much different outcome. Shows how strange (or wrong, I guess, in this case) memory can be, but I remember being utterly horrified because the young man was run over.

Guess this is as good as any place to post about this weirdness.

Also references to this image appears in that odd heliofant video I Pet Goat II.

Plenty of conspiracy fodder here with this image (realistic/likely conspiracies, such as to suppress the knowledge of it, as well as more out there)


Yeah, I remember him being ran over too.... But, yeah, I was younger too... I even thought that I seen an interview with the tank driver saying "I was ordered to go forward, I followed orders..." or something like that....

Or its that Mandela effect again...

It does sound like something China would like to erase from it's history... If they had a time machine...
edit on 5-6-2021 by ByteChanger because: (no reason given)

I'm surprised you can be so unceasingly amazed at my posts. I must be doing something right!

Very weird to have this memory (Very vivid one for me due to the feelings of disgust and horror it provoked). Maybe the younger me just was overwhelmed by his smallness in respect to the power of the tanks and my mind ran with it? 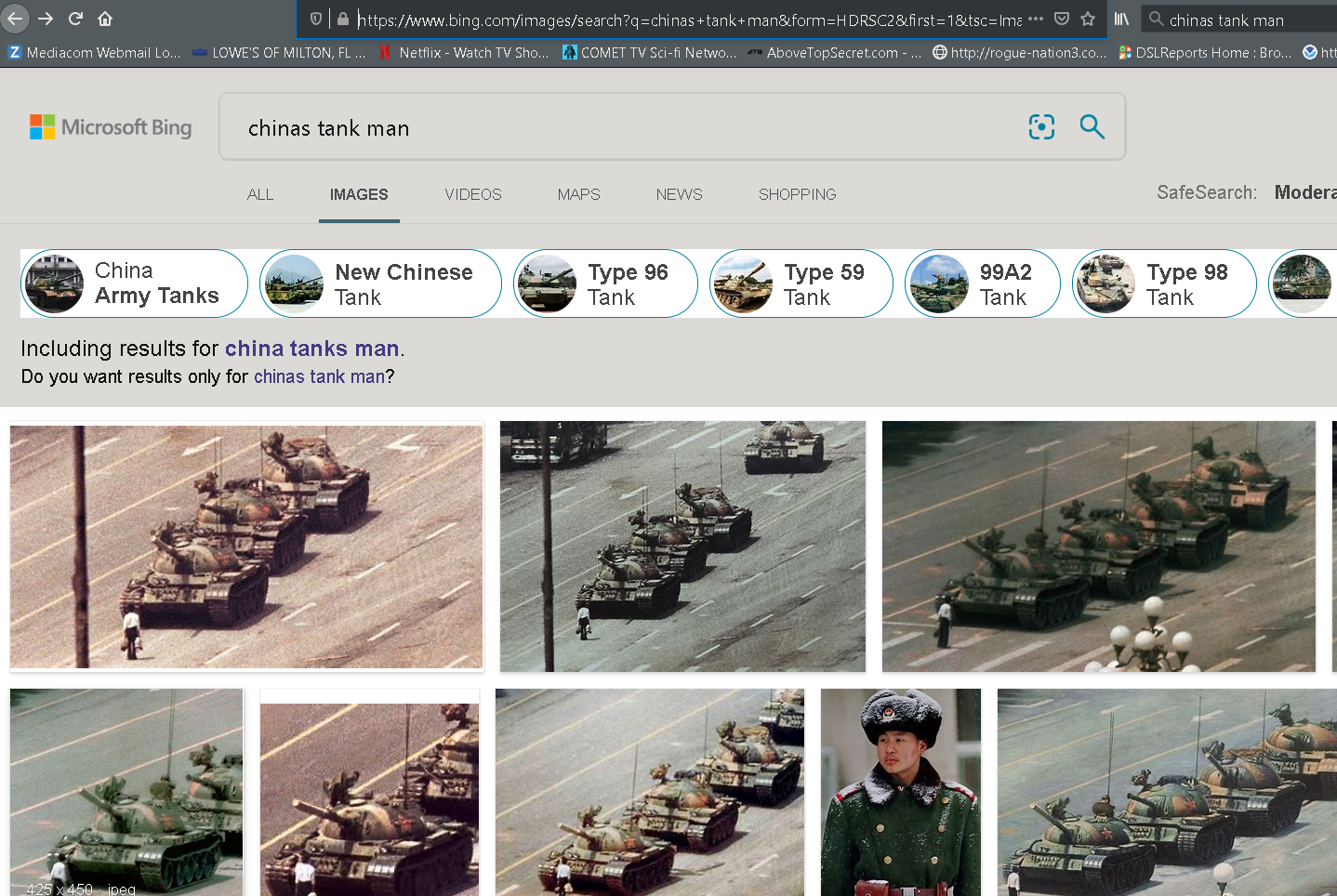 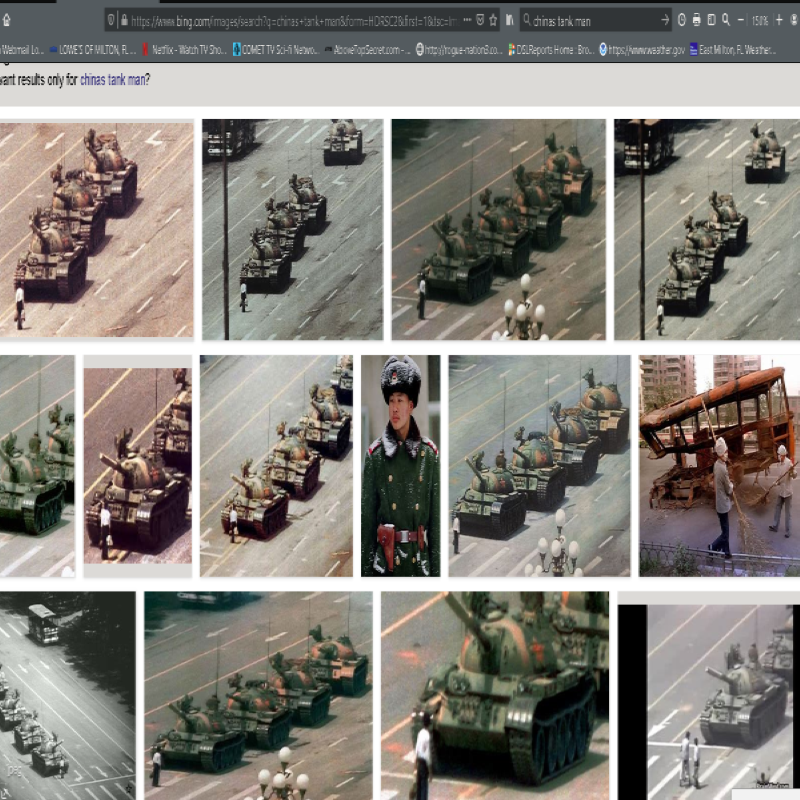 
Did the CCP come by and star this post? I'm wondering why so many members would star this post, when a few posts later you admit that yesterday (as stated in OP) the Tank Man was nowhere to be found on Bing.

In fact, you had to scroll down past quite a number of articles on this very subject to get those images you posted in the screenshot, did you not? When I type "Tank Man" into Bing, the first 20-something hits are regarding Tank Man's noticeable absence from the engine yesterday.
edit on 5-6-2021 by zosimov because: (no reason given)

Not sure whats going on. This incident took place 32 years ago yesterday. And Instagram is dumping all kinds of photos. 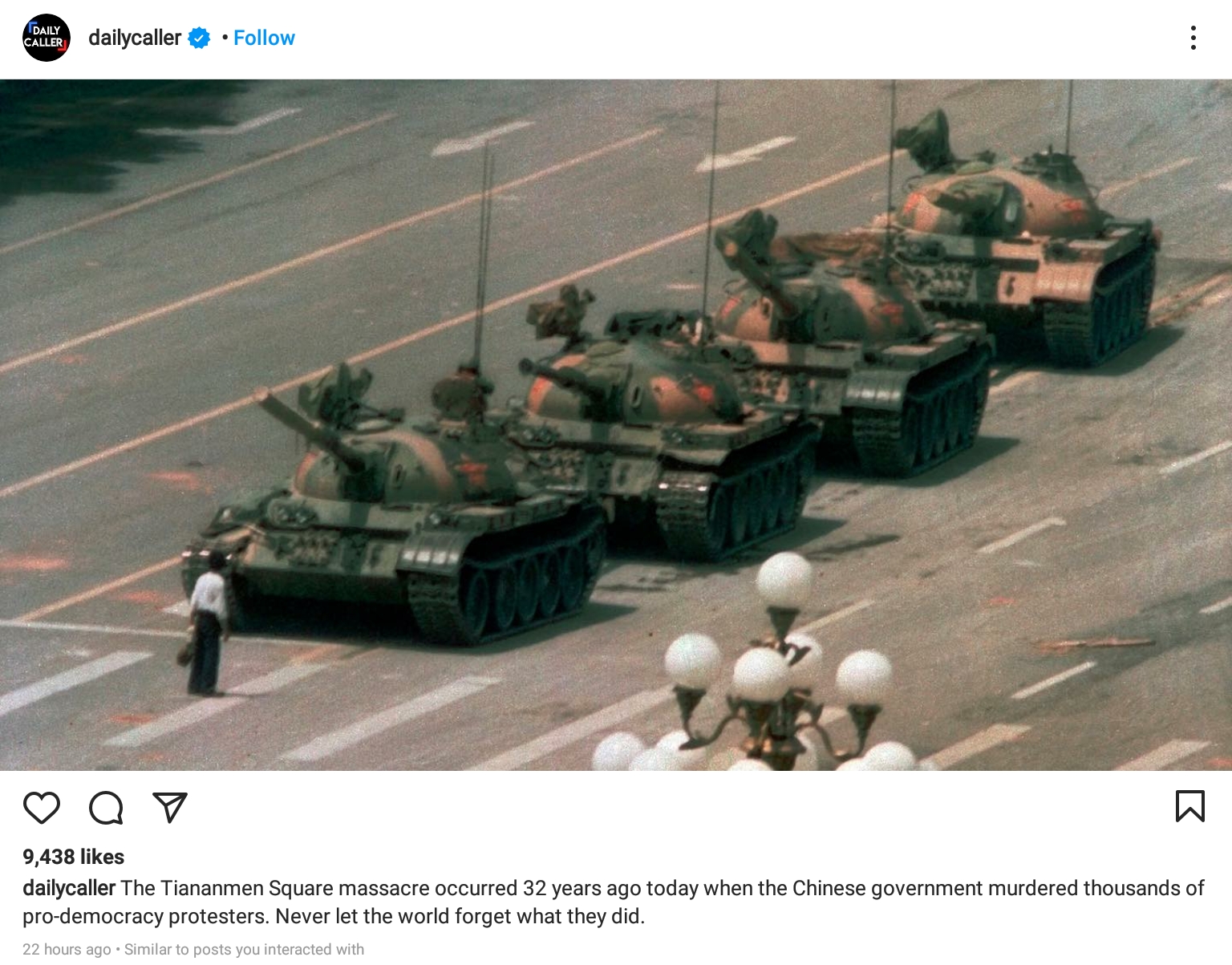 That man is the bravest mother father I've ever seen... i saw this live!

WOW.. you witnessed this amazing feat of courage??

ETA: I had a sub once in a political science class years ago was there at Tiananmen and who had tears in his eyes telling us about what he witnessed.
edit on 5-6-2021 by zosimov because: (no reason given)

I wasn't in 5th grade. But it was like watching the Olympics. Thanks for posting this thread.

posted on Jun, 5 2021 @ 04:31 PM
link
a reply to: Bigburgh
Correction to OP:
Looking it up, I see the anniversary of Tank Man's stand was 32 years ago today, not yesterday. The day (or night) before (6/4/89) puportedly saw student demonstrators being run down in tanks in Tiananmen.

Good day for this thread.


Some of the images in this link are incredible. I love all the peace signs; the image of one of the demonstrators carrying a sign quoting Shakespeare: "To Be or Not to Be," the statue erected called "Goddess of Democracy."

well your link in the OP shows the same image.

bing has been called out on it.


The award-winning photo from 1989 was not served up in image or video searches using Bing even outside China, a country known for strictly controlling what is available online. "This is due to an accidental human error and we are actively working to resolve this," a Microsoft spokesman said in response to an AFP inquiry prompted by US press reports. Meanwhile, searches for Tank Man using Google, which has some 92 percent of the global market for online queries according to Statcounter, turned up an assortment of pictures along with the iconic one by photographer Charlie Cole and others.
Famed 'Tank Man' Photo Vanishes From Bing Search Engine

you know sh@@ happens and it's not always on purpose.

There is only one way to exclude anything from the internet .
Change the algorithms to exclude the term .

Ah there is like images of the tank man guy everywhere on that link, you linked. Microsoft sucks at banning things I suppose.

But hey if people dont find it on bing search engine, there is always google search engine. And if google doesn't have it, then likely duckduckgo has it.

Tank man? Sounds like a comic book super hero. But ya. Your right. Lets just say its not hard to completely 404 anything on the net. But its also just as easy to not pay any attention to it at all in the first place. And just like that poof! Magic. It disappears.

Ah there is like images of the tank man guy everywhere on that link, you linked. Microsoft sucks at banning things I suppose.


naw, you're just late to the party. It was down, as evidenced by the many links to articles about the incident, but looks like Microsoft doesn't like the scrutiny and scrambled to do damage control.


But hey if people dont find it on bing search engine, there is always google search engine. And if google doesn't have it, then likely duckduckgo has it.


Ok. Doen't change the fact that Microsoft censored the image of the hero who stood up to the Chinese Communist dictatorship. As stated in the OP; why would they do that?


Tank man? Sounds like a comic book super hero. But ya. Your right. Lets just say its not hard to completely 404 anything on the net. But its also just as easy to not pay any attention to it at all in the first place. And just like that poof! Magic. It disappears.

No one knows his name. He was lost to posterity and probably killed. Tank Man is a good a descriptor as any, I suppose.

posted on Jun, 6 2021 @ 08:19 AM
link
a reply to: hounddoghowlie
The censorship appears to have been temporary. I've come to the story late, tried the search out on Firefox (which uses Google), and got results headed with news stories in which Microsoft blamed the censorship on "human error".
Wasn't it "human error" that caused President Trump's first suspension from Twitter? It must be the new word for "tried it on, but didn't get away with it".

naw, you're just late to the party. It was down, as evidenced by the many links to articles about the incident, but looks like Microsoft doesn't like the scrutiny and scrambled to do damage control.

Party huh? Well dam. Probably, always late for things. But either way, tank man is up on the search engine. To remind people of a bygone era, and era were they took themself all so super cereal over there favorite form of ism's.

And to tell the truth zosimov or however you say that. I think if the guy went home put his groceries away, and ate some lunch? Would things have changed that much in good ol communist china or that whole area?

Maybe. Maybe not. But it did bring to front a whole coalition against it. It was soon forgotten by the world. Then it was remembered at a latter date, and then forgotten again. And people still to this day like there favorite form of ism. They should all just take up a different hobby.

As why Microsoft erased it a bit on there search engine? The answer is likely because china does not like bad publicity. So sensitive there government is over there, they think they matter. But a lot of people subscribe to there way, there just giving the people what they want.

Somebody to tell them what to do and not think.

Some very good points! Thanks for elaborating. I do think people tend to be very forgetful. Maybe this is what China's government (and others in respect to their own crimes) counts on when in matters such as this one.

(The party wasn't the same without you. )

posted on Jun, 6 2021 @ 10:32 PM
link
a reply to: zosimov
Ok whatever. They used to make shirts of the guy with the tanks. Wasn't it around the same time they made shirts of Chea che guevara. They dont make those shirts anymore now a days, they don't sell well or are all that popular.

I think this pandemic killed the Pokemon craze for some reason. haven seen one kid or person wearing a Pokemon shirt since. But ya, everything becomes and cultural icon, and everything is soon forgotten to be replaced by another.

Pretty sure the Chinese are tired of there tired ass government in china as well as the Americans are. Or at least those who have a semi not neutered internet service providers. But hey? Whatever.