posted on May, 30 2021 @ 03:53 PM
link
well this is my very speculative post about the a-word and no not alizondoh but aliens, and i know aliens may not be the best term for them but its an easier one to use but ill also interchange the description for them as well so follow along

for some reason people have painted themselves in the corner with this "phenomenon" in which has technology that uses such an advanced physics that we dont know how they do what they do, we just have theories which is better than nothing i guess, and people are excited about this, i find this fascinating however they continue the game of yes this is a real phenomenon but thats all we know but is it really?

we are slowly becoming aware that there is a permanent presence of several species of lifeforms and several other species that come and go from our planet, i do not think we humans have an idea where they all come from and where we belong in all of this but for some reason there seems to be some number of how many of these lifeforms are on the planet with us, was there some sort of census? or some type of agreement? someone please foia that

im pretty confident in 11 crashes 2 shoot downs and at least 9 meetings a few with military and the rest with civilians, there maybe alot more than that but havent been made public yet, most of the crashes happened in the 40s and 50s for some strange reason and they were mostly the preying mantis types, could it be because their control mechanisms are easier to interfere with? they either fixed that problem or just left because havent heard them crashing in a long while

the other crashes were the short beings under 4ft tall usually with the big heads, people have described them as dwarfs, midgets, or just plain little people, but some of these shorter beings have been described as creatures and even space animals early on, the coloring ranged the gambit from gray to yellow to blue to brown to black

many of the meeting types were the more humanoid types such as the egyptian looking grays, olive skin muscular looking ones, nordics, gray bearded look, etc.

the question to me is which of these are the creators and which ones are the created? some of them might have created themselves, did they create helper creatures? right now we are the created, could one of these lifeforms created us? or are they like hey idiots we live along side of you quit warring against each other and most definately get rid of your energy weapons, we use that energy to propel our machines and you use it for warfare grow up? until you do we will put an obvious surveilence on you even to the point your whole world will find out we exist? but they will still not believe, theyll paint themselves in a corner and call our machines balloons

anyway im going to write something about potentially the interdimentional possibilities hopefully soon, but somebody else has to be making these machines and those somebodies have a long history along with this subject matter that i dont think we should ignore imo, question of the day why do you think people are afraid to even consider the possibility of non human lifeforms being smarter and more experienced in physics than human beings?


question of the day why do you think people are afraid to even consider the possibility of non human lifeforms being smarter and more experienced in physics than human beings?

same reason humans are afraid of other human lifeforms being smarter and more experienced in physics than themselfs. Because their fears as most emotions are still instinct driven, only there to survive and that guy with his experience could kill me.

posted on May, 30 2021 @ 05:03 PM
link
Change....some folks have a fear of change. Let’s say what’s going on is a new worldwide Paradigm shift. A sample of previous worldwide Paradigm shifts to me was the Industrial Revolution....people livelihoods evaporated when machines and automation replaced them....,,,911....the President, if I remember in terms of resiliency, said we will not change, and yet we all did with heightened security.....worldwide. Currently Covid a life with masks, creating a multinational worldwide segregation stigma of those who have been vaccinated and those who have not.

Now the possibility of Aliens and their science and technology. The Paradigm fear here is much like the obsoleting livelihoods of the Industrial Revolution.....imagine billion dollar industries evaporating by alien science and technology that will replace them and you.....It will be the same story of the haves and haves not, but worse....worldwide. They may even have their own religion. Of course adapt and assimilate to survive.

Until some organisation comes out and displays physical evidence all we'll ever have is speculation. I'm unsure that there's some super secret program involving aliens and I can think of plenty of reasons why a government would paint such pictures.

Think about it, if governments came out and truthfully admitted that they know absolutely no more than Dave the abductee then people would freak out. Rightly so too. Because that means government's just admitted they lied when they say these things aren't a threat to national airspace.

Speculation on my part although I do see a possibility where tptb are as equally clueless as us. I'd find such a scenario to be a little less alarming than a cover up personally.

I never liked the saying curiosity killed the cat and the unknowns usually don't give me anxiety. It's the potential knowns that do that...

If they aren't from Earth, it would make sense that these greys are biological drones or maybe a servant species.
Mysteries abound! Hopefully all this recent disclosure isn't just smoke and mirrors 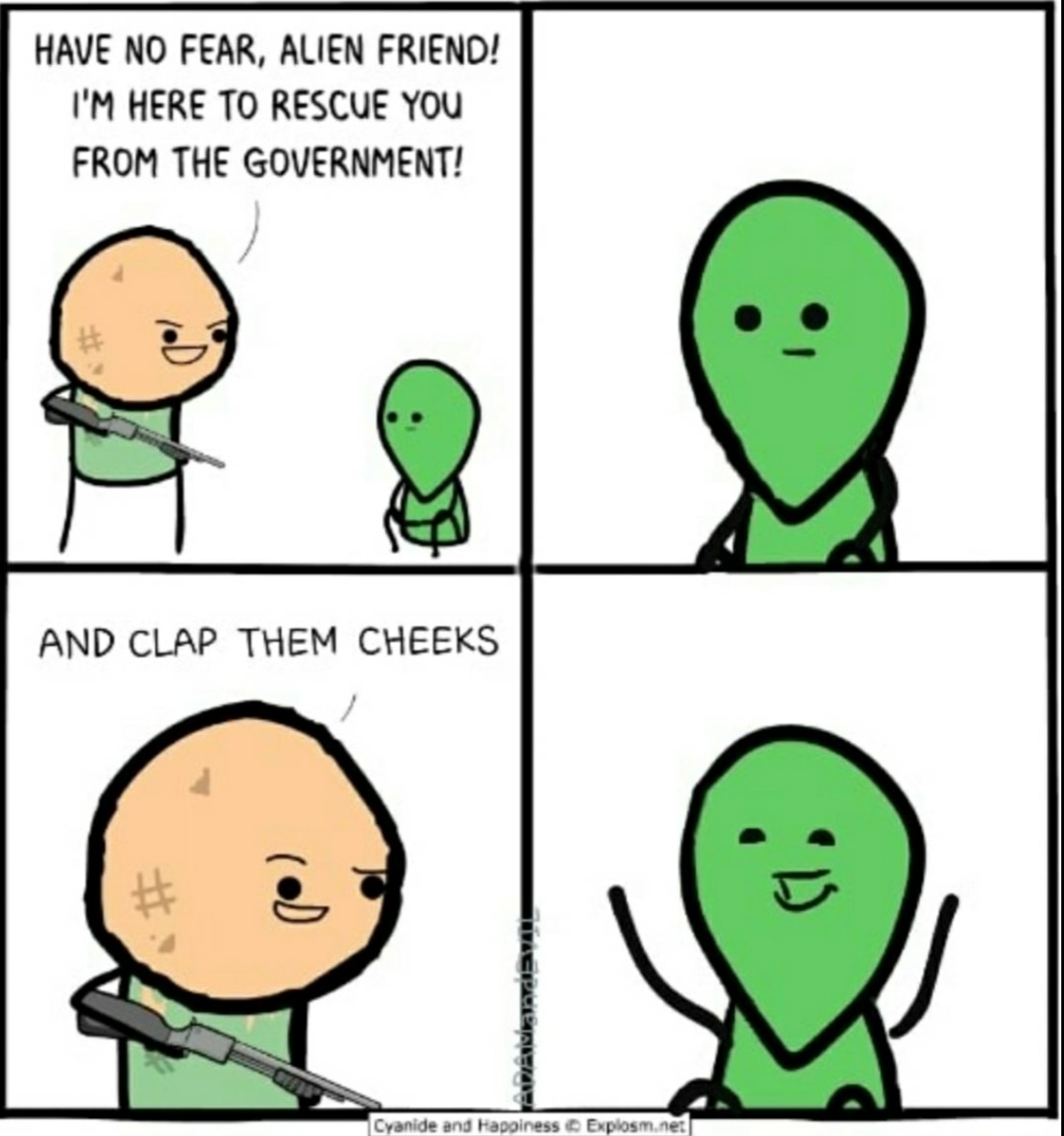 I spent a while thinking about your question. I think fear of the unknown is the basis of all our fears.

I feel like so many people in this forum and out in the world, besides religious allegiances, are having existential crisis's that prevent them from recognizing the existence of extraterrestrials...

The existence of a higher intelligence from elsewhere and no longer,.in their minds being "in control" and being the apex here on earth makes them lose their grip on reality..

originally posted by: Lucidparadox
a reply to: Terpene
So they just chose to deny it in order to fulfill that need for order and control they have built up do to some childhood trauma they have