Firstly, we are a republic, tho some nincompoops think we are a democracy.
May I remind you we have free speech here, and we have the right to protest.
Guess it makes me a citizen.

posted on May, 30 2021 @ 05:07 AM
link
a reply to: kwakakev
Thanks for the update and the info.
Hopefully your government will not force an experimental jab on you.

I think the police were being extremely polite to these bioterrorists. 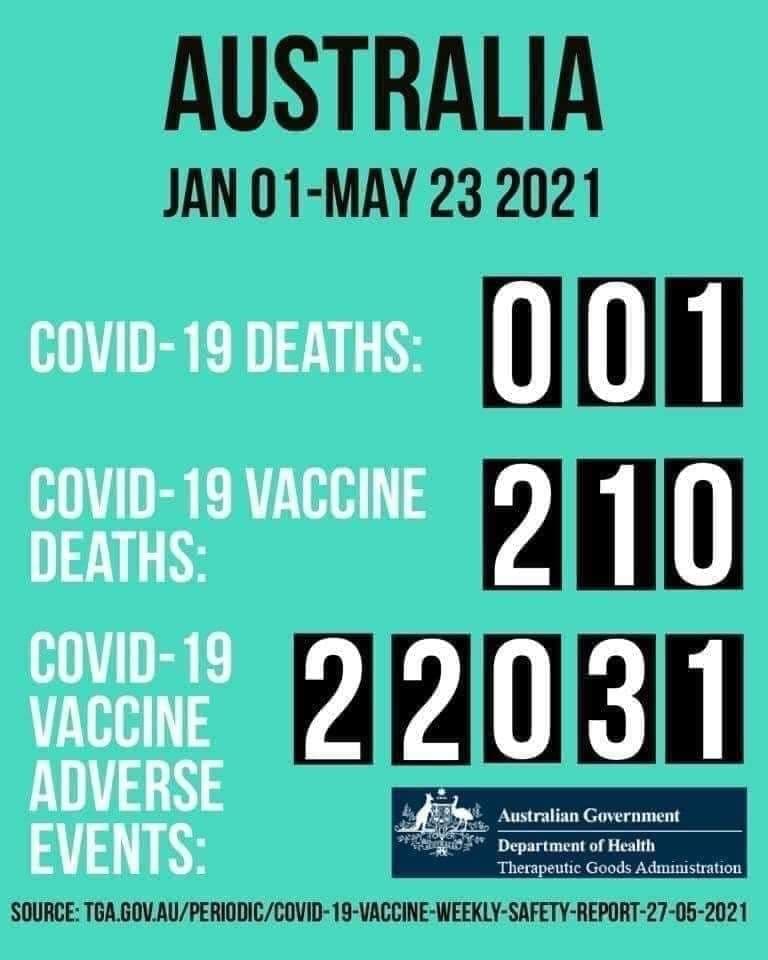 I agree the police are being very polite to the real bioterrorists.

I do not consent. It might cost me something depending on how hard the government pushes this poison. If I am right only need to hang on for a few years until the full vaxx agenda is in effect and will collapse on itself.

May 29th 2021, Tyranny enforcers doing what they do best. Welcome to Scomunism

Here are my current active social media platforms. This YT channel will likely be shut down soon, I've already been demonotized and given 2 strikes for questioning WHO direcyives. 1 more and its gone

It looks like the old Nazi tatics are in play, kill off the weak and vulnerable with this policy direction.

I do not consent. It might cost me something depending on how hard the government pushes this poison. If I am right only need to hang on for a few years until the full vaxx agenda is in effect and will collapse on itself.


One would think waiting until something isn't experimental would be a good thing?

posted on May, 30 2021 @ 12:21 PM
link
a reply to: kwakakev
Very disgusting treatment from what appears, as you described, a police state.
Quite tragic.
Hold on!

originally posted by: shooterbrody
a reply to: chr0naut
Did I address you?
Must be a guilty conscience?

Firstly, we are a republic, tho some nincompoops think we are a democracy.

Officially, the USA is both. It is a democratic republic.

However, that really means very little because New Zealand and Australia are also republics, and democratically governed. In fact, there are very few nations in the world currently who aren't republics:

May I remind you we have free speech here, and we have the right to protest.
Guess it makes me a citizen.

We have free speech here, too. It is enshrined in the UN Universal Declaration of Human Rights, and has been ratified by nearly every country on the planet (except the United States, by the way. Hmm...).

However, I am sure if you did a little research of the ACLU's court cases that they have lost where free speech was their primary argument, and that are now enshrined in legal precedent, you would realize that 'free speech' is just a jingoistic slogan propagandists use and you don't actually have free speech in a universal or legal sense.

It's like saying the citizens of the USA have liberty, in the country that incarcerates more than any other country, both in absolute numbers, and in per-capita terms. In a country that also claims a fairly average crime rate (look those things up). What's with that contradiction? Is your country systematically imprisoning non-criminals by the hundreds of thousands?

This a 2-3 minute video that shows more clearly what happened when the police did rush the few protestors that where walking home near the end of the first video posted on this thread. Nick is the one that interacted with the police near the start of the first video, he done an upstanding and reasonable job. If that debate was conducted in a court of law he presents a very strong case.

Nick is also the one that got his arm / shoulder damaged by the police actions, can see him holding his arm walking to an ambulance once it arrived.

It is a troubling direction where police have lost their self determination and are taking dictates from a few government officials, it is the path to a dictatorship. The personality that is also emerging within the police force where they must win at all costs, does not matter if they are right or wrong is losing public confidence in this important institution. I know are are still some good people in this system, as for the new recruits coming up the ranks there is going to be some hard lessons along the way.


Avi Yemini has been doing a great job with Rebel News through all these Melbourne lock down dramas. This video is a recent interaction he had with police while trying to report on the protests going on.
edit on 30-5-2021 by kwakakev because: spelling

posted on May, 30 2021 @ 08:53 PM
link
a reply to: chr0naut
No
The usa is a republic, no matter how much you whine about it.
A constitutional federal republic to be more exact.

And yes, I am a citizen.

originally posted by: kwakakev
Covid-cops mess with the WRONG journalist!


Avi Yemini has been doing a great job with Rebel News through all these Melbourne lock down dramas. This video is a recent interaction he had with police while trying to report on the protests going on.

That is sick tyrant intimidation tactics.
Garbage ass government.
Garbage ass police.
F them!
This type of journalism is vitaly important to maintain freedom.
Thanks for the video and update !


Marty Focker 2nd arrest was put up earlier in this thread, he was arrest fro stopping to put out the first fine that caught on fire.

In this first arrest, the police done it because he thought he was not independent media. Despite Marty having a camera and making a political commentary about the situation in front of police. With this story going international, Marty looks like independent media to me.

It looks like the police officer that made the arrest did not like what Marty had to say, so they nabbed him and when fishing through all of his stuff trying to find something to pin on him. It does look like a bad case of covid 1984 as the Ministry of Truth is the only one allowed to promote hate week.

this cluster is up to 40?.. 40 cases spreading in the community.

If we do a weeks lockdown we could break it down.. then return to normal

these idiots protesting, would they rather we hit 4000 cases in this cluster?

And these cries of 'tyranny'

OH MY GOD.. you're being asked to sit at home on the couch, binge netflix and get a government welfare check to do it.

grow the fk up you whining babies

So when does it end? Already been doing on and off lock downs for over a year now. It started of as 2 weeks to flatten the curve. Have only had one government reported covid death in Australia this year so far. Do we shut down the road network because of car accidents? Just where is the reasonable cost / benefit response to the covid issues?

So it ok for big business to remain open, it is ok for the police to rally together. Treatments are a lot more successful for doctors that know what they are doing from when it first broke out. If you are happy to stay home and watch netflix that is up to you. For others that realize covid is just one risk in a world of many, they just want to get on with it and make the most that our lives that we do have to offer.

With everyone on home detention, rates of suicide and domestic violence are increasing. There is a lot more going on in this world than just covid. While so much of the system is focused on just this one thing, many other vaild risks and dangers are being ignored.

originally posted by: shooterbrody
a reply to: chr0naut
No
The usa is a republic, no matter how much you whine about it.
A constitutional federal republic to be more exact.

And yes, I am a citizen.

But are you a patriot? Do you want the things that are for the greater good of your nation?

This guy from Victoria was forced to close his gym and is out of a job, while those serving donuts and thick shakes is still considered an essential service. Just what kind of prioritizes and reasoning does the health minister have?

For some good news and hope with this divisive issue, London had a big turnout on this weekends protest. I don't know the exact number, One estimate I got was over 200K. The police there are on board with the protestors. It does look like government support for the vaccination passport issue has dropped.

It's the age of information and you choose to believe what the majority of the population is blindly believing.

What do you hear being done to avoid hospitalization and deaths? Do you read? Because there are many studies proving effective outpatient treatment regimens to avoid such. It isn't as far fetched and wild and dangerous as they would have you believe. It's a few simple, proven, safe and effective meds administered early to reduce symptoms and promote recovery before the disease takes hold. Ohooo what a f*cking whacky for right suggestion eh?

If an effective treatment is proven to the population the vaccine loses its EUA status. Sound trustworthy? Must be a conspiracy?

Good doctors help people. They consult and put their heads together. Good doctors don't take one recommendation and stick with it if results aren't satisfactory. They TRY TO HELP and avoid hospitalization and death. Good doctors most certainly do not take advice from politicians and IT specialists.

But yes, we who don't blindly trust your bullsh*t rhetoric deserve to be beaten by civil servants on public ground for speaking out against tyranny.

Tell me how every country conspires to administer a bogus, experimental, MASS gene therapy trial instead of outpatient treatment and natural antibodies is such a trustworthy idea?

I've lost so much faith in humanity through this. Many of whom I was confident and respected enough to believe they would question things themselves but have not. So much so, that I'm to the point where I, regrettably want to tell everyone who is so naive, "they are actually smart to have you line up, because you will, their point is proven."

If depopulation is the intent, they've succeeded in only allowing the strong in this race to survive.
edit on 31-5-2021 by Moelson because: (no reason given)

So when does it end? Already been doing on and off lock downs for over a year now.


How would I know, we should be asking CHINA.

I get people are frustrated, but the reality is lockdowns have kept Australia relatively covid free.

Look at India, Vietnam, Sweden.. countries that didn't take the lock down route early are paying for it now.

Maybe vaccines? people are putting all their eggs in that basket, so in 12 months once majority of Aus is vaccinated maybe lockdowns will be different then.

But until that happens.... how about we direct our anger, protests and frustration's at CHINA and not our leaders who've done a bloody brilliant job to date!