Hiding In Plain Sight. Not!

Enoch and Sylvester dreaming of fish.

They can't stay out of anything that will hold them, and they don't mind pushing it. They have gotten stuck a time or two. I should call them The Container Duo, or Find Me If You Can. 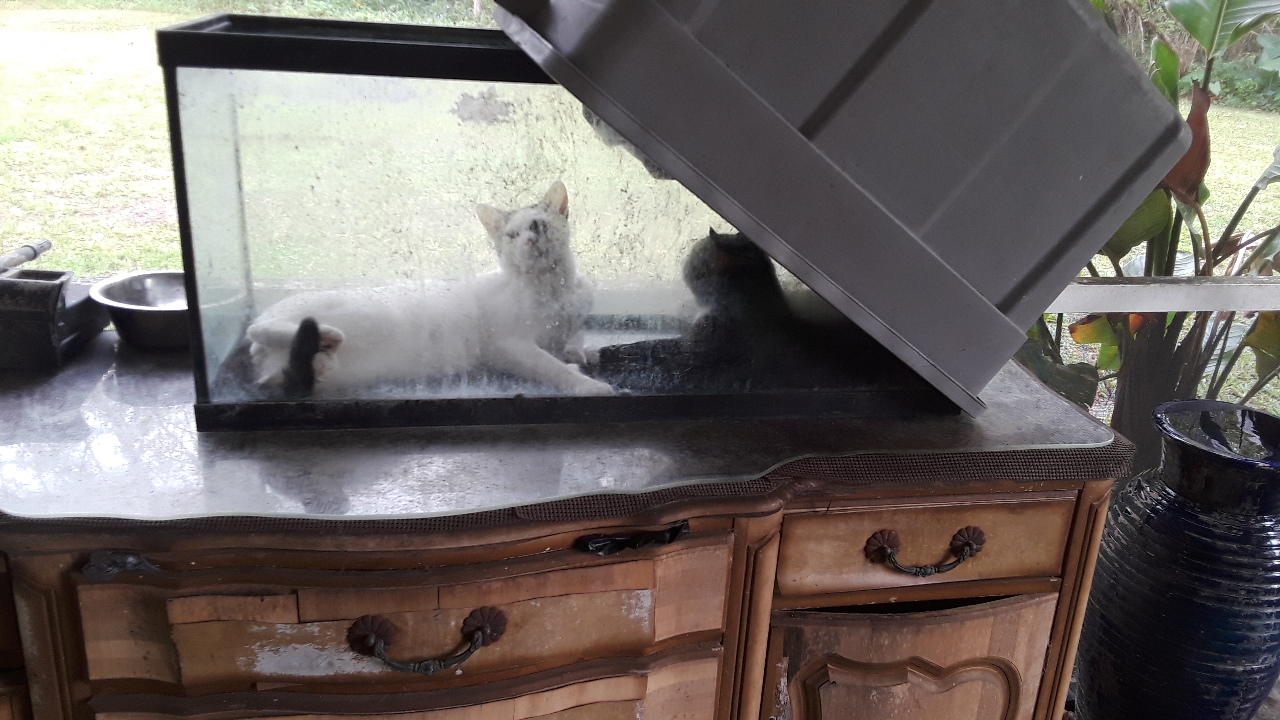 I really made this post to test the pic fix. I have had so much trouble with it over the years that I pretty much gave up on it.

Since Enoch and Sylvester were up to their usually shenanigans, I thought I would give it a try.

From the preview, it worked. Easy peasy.

Try this experiment on them... invisible squares!

His previous owner named him Spot. I got him when he was 3 months old. He would not respond to the name Spot.

I told my Mother to call him any names she could think of, if he responded, we would rename him. I didn't like the name Spot, for him any way.

The name Enoch popped in my head. I said Enoch, he picked up his head, looked me, meowed, and walked over to me.

He has answered to the name Enoch, ever since.

He even comes when strangers call him by his name. Now Sylvester will come when you call Enoch's name sometimes. Not Enoch. He only comes if you call Enoch. He is a really strange cat.

That's an awesome tale. Cat's are so versatile in their characters it's really funny...

Animals always pick their names....LOL!!
It's great your Mom did a roll call till kitty heard the right name. BTW see thru boxes are just evil, genius but evil.


LBK (little black kitty)who is a dead ringer for the black dragon in "how to train your dragon" refused every name including Nightfury only to "pick" Beanie. Made the mistake of calling her a string bean an no mystical magical name now! Sigh.

Still waiting for the Turtle to pick her name.
Would like to think it'll be one that's not embarrassing, but she's ornery & spiteful. You just know it'll be something
awful. That's how she rolls. Her nickname now is Thugly cause she's living the "thug life" tearing up her tank like a boss.
But that name is just a placeholder till she makes a decision.

Maxx and Bellauh were a year old and registered with those names when we rescued them. They are Siberian Huskies, and we got Tamar and Goliath as the result of an oops. But they Mom and Dad have nick names, granted to then by my brother.

Maxx is called Slickster, a name well suited for him, and Bellauh is called some many things, but she responds most effectively to "What did I tell you?!"

Pets are absolutely ridiculous usually when choosing their own names.

I've got a Mittens, a Saddleback, a Random Gibson, Beanie, Keebler and Cuddles who besides actually being full-time cuddly was a pole dancer in her previous life. This is "the Cud" doing her "why are you still here? Go make the kitty-chow!!!" look. Me having days off (weekends) worries her.
And yes...I DO have a permanent bruise on that shin from her use of pain to motivate me. 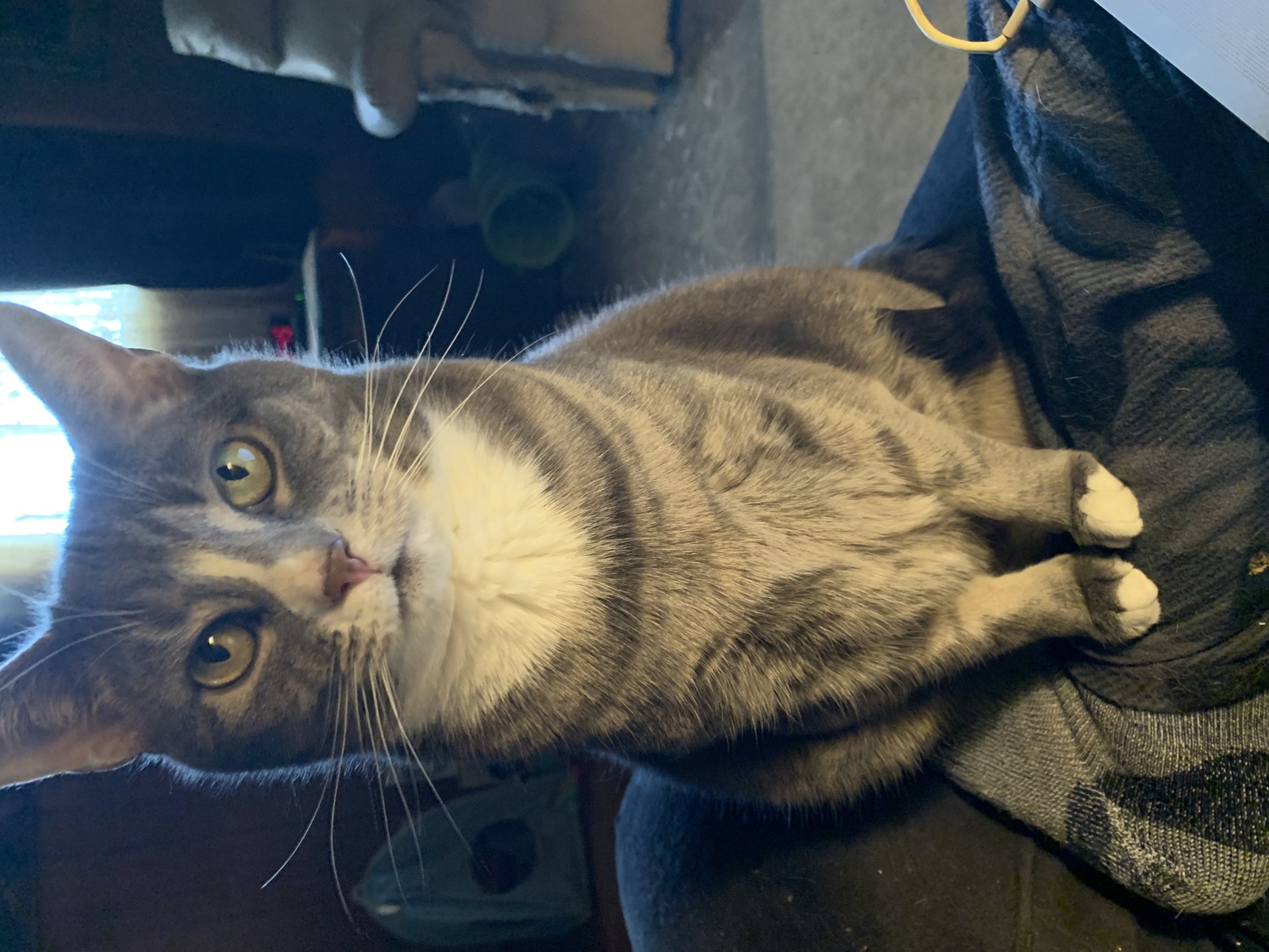 originally posted by: Caver78
a reply to: NightSkyeB4Dawn

Pets are absolutely ridiculous usually when choosing their own names.

I've got a Mittens, a Saddleback, a Random Gibson, Beanie, Keebler and Cuddles who besides actually being full-time cuddly was a pole dancer in her previous life. This is "the Cud" doing her "why are you still here? Go make the kitty-chow!!!" look. Me having days off (weekends) worries her.
And yes...I DO have a permanent bruise on that shin from her use of pain to motivate me.

Well, they know what they want.

Sylvester loves to play, but he gets tired of Enoch fairly easily. He prefers playing with his Husky pack siblings. I think that is because he likes to jump, and it is more fun jumping on their backs, then jumping on Enoch's.

Enoch thinks he is king, and Maxx allows him to play pretend, truth be told Maxx is lazy, and just doesn't care.

I know that look Cud is wearing, I have seen it often enough. They can be demanding little brats. They do want what they want, when they want it.

He just locked me out of the house.

Here he is chasing Maxx out of his crate. I guess Sylvester is supposed to be his back up. 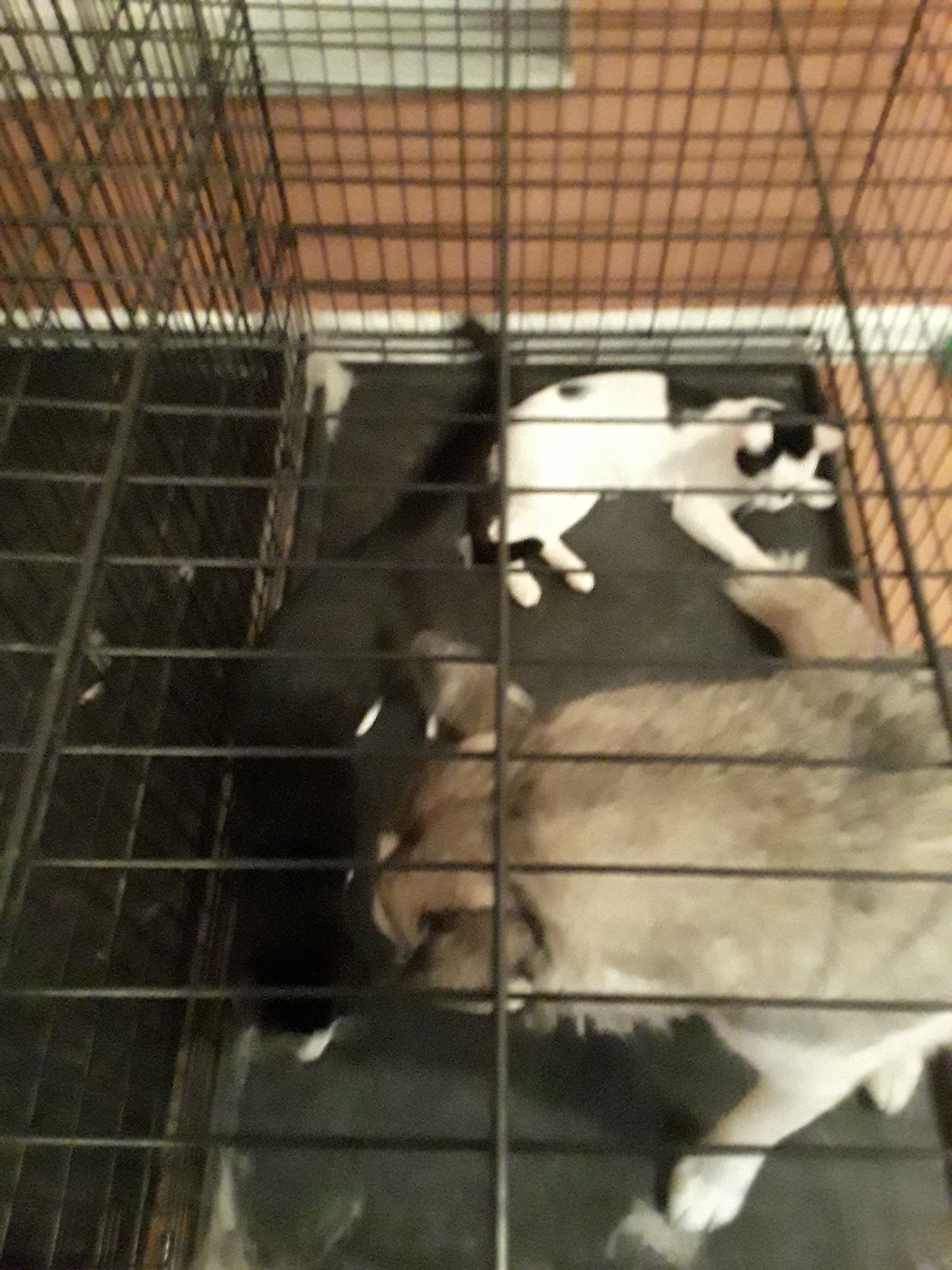 Huskies are smart.
He'll "flip" Sylvester then starting his own kitty pack rule the house before ya know it! Fun Times!!

originally posted by: Caver78
a reply to: NightSkyeB4Dawn

Huskies are smart.
He'll "flip" Sylvester then starting his own kitty pack rule the house before ya know it! Fun Times!!

Yeah. Maxx and Sylvester are the closest. They hang together the most. Enoch, he thinks he is the alpha and tries to play at being king. Maxx lets him.

Maxx is the real king, because he just lets Enoch think he is king. Same thing with the rest of the pack, he doesn't bully anyone, and his kids will soon be three years old, and he still leaves them a small amount of his food with every meal.

He is mouthy, has to have the last word, but is gentle, tolerant, and chilled. His son is like him, except he is not chilled. His daughter is chilled, but not tolerant, of people, but very tolerant of the kitty siblings.

Real leaders could learn a lot from Maxx.

posted on Jun, 3 2021 @ 06:35 PM
link
It's amazing how many people ignore the dynamics & complexities of their pets behavior/personalities.
Or are uninformed in wildlife behaviors in general. I'm very glad you are so perceptive.

Saw my first 2021 swallowtail butterfly yesterday
Saw my first EVER Scarlet Tanager last week
Saw a Pilated woodpecker on same road a few days before, but they have always lived in that valley, still thrilling
Last year saw my first ever Quail on same road! OK...first Quail east of the Mississippi.

You'd think I'd be too old for this crap, but NOPE!
Still looking, still thrilled when I score!

You'd think I'd be too old for this crap, but NOPE!
Still looking, still thrilled when I score!

i live in the woods, so plenty of wildlife out here.

Because of all the new developments that are popping up all around us, the critters are being chased into the only area of woodland left. Some are welcome, some not so much. The wild boar are destructive, the coyote are a supreme nuisance. The rabbits drive my dogs nuts, and the bobcat have dwindled.

Pilated woodpeckers and bobwhites are plentiful. I have a pair of resident hawks, and an anhinga. I have an eagle and a blue heron that visit on occasion, a giant great horned owl that visits fairly frequently, and dozens of screech owls.

Totally a bird "new to me". I'm a little surprised that people are complaining about bird noises. You would think that new construction would include insulation for the AC if nothing else?

For years heard rumors & stories of Coyote here, but they aren't like further north in the State being vocal in packs, so I discounted it. Fortunately my neighbor got some on film so Yep! Got quiet ones! Hogs have also been found & filmed out in the central part of the State, I'm absolutely not looking forward to them inevitably moving in.

(Laughing)
I do the white noise thing to sleep but it's not so much Owls or Cars, but more me having no interest in hearing stuff I'd rather not know about. My home does it's occasional thing where you hear 40's music that you can't locate an other assorted oddities. My one cat is on it! It's taken me years to convince him I give zero-figs for whatever is going on outside at 3am. Ironically I'd be fine with Limkin racket.

The bird-life here is much more sedate than yours. It's usually just the House Wrens mocking the cats on the windowsills or the Blue Jays screaming at them from another tree up against a window. I'm of the opinion my House Wrens think they get Karma Points for Cat concussions as they taunt the hairballs into bonking their heads.

Almost forgot, my one big male has a Deer buddy.
Since he's been an indoor cat (wasn't always) she now visits him at the kitchen window. He tells her how awful it is an is frustrated she's not grasping the whole "Use your hoof!!! Cut the screen!!!" I've caught them rubbing heads thru the screen as well....an this is why indoor cats still need flea & tick prevention! LOL!!!