"I love those barrettes in your hair.
Man I’ll tell you what, look at her she looks like she's 19 years old sitting there like a little lady with her legs crossed."

I know...just Joe making small talk...complimenting a little girl after noticing her hair...and her legs...and how she looks like she's 19.
I'm sure the girl's family appreciated Joe's attention to their little girl.
Totes not creepy.
Just Joe being Joe...and, after all, we all know how much Joe really appreciates little girls. 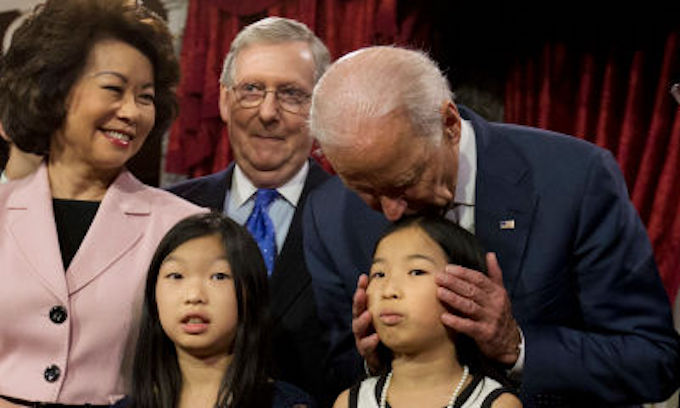 Definitely not the Whitehouse!

Did he let her caress his hairy legs after sniffing her hair at least?

Remember, there are actual ATS members who voted for this turd 🙄


Made him cry in his cereal seeing familiar faces.

beyondknowledge
+1 more
posted on May, 28 2021 @ 08:28 PM
link
I am surprised that none of the little girls have been properly taught to deal with strangers that act like that. Kick them... you know where, and seek help from their parents or police. They look old enough to put him on the floor that way. There would be no charges to the girl. The trial would look so bad and expose so much of his history.

The look on her face.

Anyways. Why is he getting away with smelling heads?
edit on 28 5 2021 by tamusan because: (no reason given)

carewemust
+6 more
posted on May, 28 2021 @ 09:09 PM
link
If Northam and Biden were to throw a party, it would be filled with child molesters, pro-abortionists, and KKK members.

originally posted by: carewemust
If Northam and Biden were to throw a party, it would be filled with child molesters, pro-abortionists, and KKK members.

And they'd all be made to feel comfortable 😃

This is what the democrats wanted.

"Everyone knows I prefer kids to people!"

The guy is sick & twisted, and he is mocking us, knowing he can literally tell us pretty much openly that he's a paedophile, and the world is so far gone that nobody in media or politics has the balls to call him out on camera at an opportune moment. We need someone to go in disguise as a democrat die-hard with reversible signage.

One one side it reads: "Great work Biden, keep on keeping on!"

On the other side - which can be revealed with a flick of the wrist - it reads:

I absolutely KNOW there's at least one ATS member who's committed enough to do the research - location of public appearance, timing of broadcast, location of news cameras, distance from secret service agents (so they can't grab the sign straight away), willingness to wait patiently in the rain for two days if necessary, etc, etc. They wait for Joe to shake some hands & sniff some pigtails, then whip out the sign just as the camera zooms in to capture the "..spontaneous moment of grandfatherly affection towards Dem supporter's young daughter in crowd".

The week after, someone else does the same. Coordinated, laser sharp protest action. How can a nation permit such a creature to reign in the chambers of power? Surely from among the millions who voted against him, there are enough savvy heads ready & willing to systematically bring this creep down, exposing him for the pervert he is - in creative & seemingly spontaneous ways, live on camera to the nation.

Come on America, you know you want to...

Remember, there are actual ATS members who voted for this turd 🙄

Couldnt of said, or implied it better myself

I honestly don't know how it got THIS far.
80 trillion voters, I guess.

I honestly don't know how it got THIS far.
80 trillion voters, I guess.

The media is NOT concerned with the President this time around. That is the truth. Investors put a lot of dough up front for Joe to be there and he is not going anywhere till what is supposed to be in place for those that control the food, transportation, housing and free speech. Hong Kong comes to mind.
edit on 0500000040442021-05-28T21:44:40-05:00444005pm9 by musicismagic because: (no reason given)