originally posted by: lakenheath24
a reply to: Xtrozero

Manchester used to be bad. Liverpool and Nottingham occasionally make the news but for some reason most of the stories come and go pretty quick.

In the 90s Mixmag had a story about Gunchester pulled because of the negative effect it would have on nightlife.

Reports are there but you have to go looking.

Are the same police she wanted defunded going to do the criminal investigation?


Those police are in an office frantically scouring twitter for suspected, possible evidence of non-wokeness and people who haven't got a TV licence.

Black on black shooting.
Apparently she was at a party, some people took exception to someone else who was there went out got a gun and she got hit by a stray bullet in a drive by shooting.
Gang related.

Certain groups have become completely enamoured with US gang culture.
Allied to the relatively recent influx of immigrants from certain parts of east Africa and there's been a complete change in attitudes to gun usage.

I have some friends in London - traditional Yardie types; big, hard men - and they have told me these youths/groups have no respect or fear of more entrenched values and groups.

I've seen similar in other towns/cities, maybe not quite as bad as London but......

I could go on but what's the point?

Or sitting on the side of the road clocking peeps for no MOT/Tax.

But call em for a stolen car? You best wait a week.


The news here has barely reported this incident. It will be interesting how this plays out in the media,,,if at all.

There are some scary peeps in London. Saw some county line action and it was just crazy.

originally posted by: LSU2018
a reply to: KKLOCO

She looks like a 60's black panther to me. Those peeps were hateful, attitudes like that kill the looks of a person. 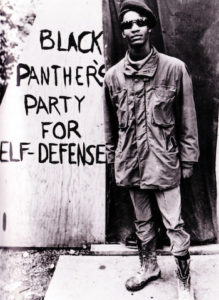 Who else will defend the elves?

As far as I'm aware the Eastern Europeans have muscled in and taken over many traditional criminal activities.
And of course they're involved in many of the newer cyber type crimes.
Whilst obviously not afraid to use guns they are still seen very much as a last resort most of the time.

But these East African and postcode gangs don't share the same reluctance.
The influence of the gangsta rap crap can not be over emphasised.

Its still worth mentioning that gun related crime is still an incredibly rare thing here in the UK....but there does seem to be a worrying upward trend.

originally posted by: lakenheath24
a reply to: Tulpa

Or sitting on the side of the road clocking peeps for no MOT/Tax.

But call em for a stolen car? You best wait a week.


The news here has barely reported this incident. It will be interesting how this plays out in the media,,,if at all.


She's fairly high profile and the BLM thing is all the rage at the moment.
The story will probably last a week or two before going off the radar.
It seems the media won't be able to frame it the way they want to so it will end up getting ignored along with all the knife crime that seems popular in London (and elsewhere) these days.

posted on May, 26 2021 @ 02:53 PM
link
The BLM crowd in the UK want to import US-style race-based crappery. Nothing like getting shot in a wannebe US-stype gangland black-on-black shooting.

If you want to live like an American gangsta, then you'll prob end up being treated like one. That's the lesson for these people.

I knew straight away who the assailants were when I read it on ABC News and said they were still investigating as, if it were a white person there’d of been riots before the ambulance got her to hospital.

Hopefully she makes it and can be the ripple that starts a wave of seriously looking at black on black gun crime.

posted on May, 26 2021 @ 04:22 PM
link
BLM is a terrorist organization with backing from known terrorist liked donors, they should never be allow to take hold in any country around the world or get ready to experience their brand of "peaceful Protest", while your cities burns and your citizens are beat to dead in their own business for no allowing looting.

I do not feel sorry for terrorist that gets killed or attacked.

Yeah, I can't help but think that, once someone puts on the black beret and is a leader of a racially-charged activist cause, rehabilitation is unlikely.

It's akin to someone getting to the point where they don the infamous white hood--ideology and indoctrination is already coursing through their veins at that point. But like you, I do hope that she becomes one of those unlikely victims of racist ideology who can come out of it, and maybe bring some people with her.

BLM also gets some funding from CCP linked Chinese groups.

We need more of that.

BLM activist gets shot by black people and relys on police (with whom she's against) to get the black people that shot her.
edit on 26-5-2021 by DBCowboy because: Covid drank my beer

Bet there aren't many AR-15's around though.

All the news programs on today are blathering on about what white people need to do...no a word of why don't you quit shooting one another.

It actually makes me LESS sympathetic to their cause.

originally posted by: lakenheath24
a reply to: MiaBandetoh

That is exactly like the States only certain states and cities have high crime rates and shootings. But that graphic is very interesting for sure!

You don't listen to much news from Britain do you.

This is less irony and more business as usual.

In Britain racially aggravated murders are extremely rare. Most murders are either black on black gang killings or white men murdering their current or ex partners.

As soon as this story hit the majority of people in Britain knew that it was going to be black on black gang crime. A group of people in Peckham were having a house party and another group of people pulled up and started shooting, Absolutely classic gang incident.