originally posted by: xuenchen
When the Democrat "Insurrectional" hearings begin, we'll all be hearing all kinds of made-up lies and bulls#t deflections from Democrats.

Hopefully by then we'll have solid proof that Democrats cheated in Arizona.

That's what the January 6th protests were all about. Democrats cheating to make Joe Biden and illegitimate president.
edit on 5/23/2021 by carewemust because: (no reason given)


originally posted by: LSU2018
a reply to: carewemust

That's total bull#. No Trump supporter from Jan 6 would've been released without bail or within 24 hours of arrest. Most are still locked up. Plus everyone knows that rich oppressed douche who has everything handed to him is one of the main leaders for antifa, if you wanna call them leaders.

Just so everyone knows what we're up against. The most powerful law/investigation agency in America, is PROTECTING ANTIFA-BLM and their members. 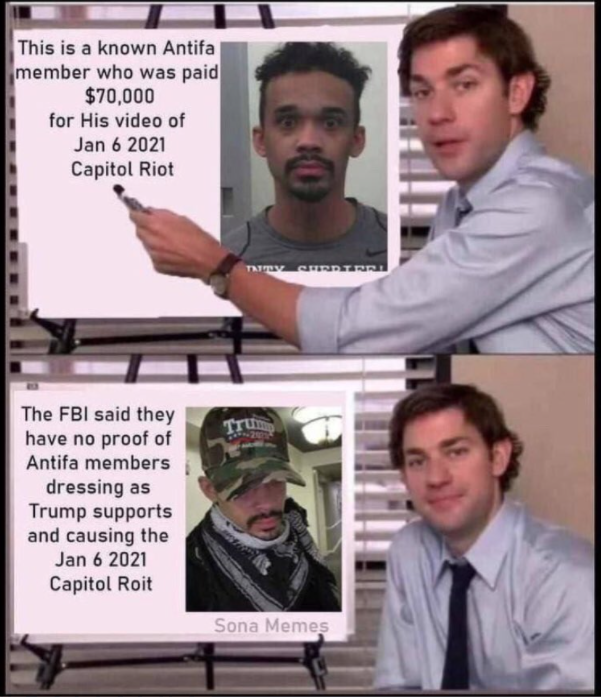 Thank-you ATS member CrankyOldMan for another Meme of Truth.

THERE ARE ONLY 4 LIGHTS!


crude and redneck and on ATS shouldn't imply "average". I would have to agree with CWM that the average person doesn't have a clue who JS is.

If they don't know who he is and don't bother to find out, what is the purpose of the post.
For me, to me the title was turned into clickbait. For me, that is just one more form of dishonesty/deception.
edit on 23-5-2021 by CharlesT because: (no reason given)

I agree that this guy should be arrested and had his cash confiscated. However, his association with antifa is very questionable. Yes is is black and yes he did associate with that group for a bit. However was he antifa? I found this on wiki.

Sullivan was treated with suspicion in left-wing activist circles. Labor activist Talia Jane said he is "reviled throughout the activist space", noting he had been escorted from a December 12 event at Black Lives Matter Plaza after he was identified.[3] Many suspected him to be a double agent working for law enforcement. An activist from Portland warned people not to trust him, after he got local activists arrested in September 2020 by leading them down a wrong route and into a police kettle.

Reading about him is like reading a story about a guy just looking for individual power and notoriety. You might read it on wiki, it's rather amusing, this guys scattered trail of failure on the front lines of American turmoil.

And he is not alone in his attempts to justify his being in the capital building by claiming ''journalistic privilege''. There were at least ''eight more'' individuals mounting this defense. see


thank you for posting this. i feel like it gets bought up at least once a thread where this guy is concerned and always goes just completely ignored. it's aaaalmost like the vast majority of ATS posters have already made up their minds about who's Good and who's Bad and only want to see content scapegoating antifa in every possible way so that they don't have to think any deeper about the complicated issues affecting our world.... I'm sure that's not the case! i'm sure it's a coincidence! everyone here is very deny ignorance! ha haaa thank you for posting it regardless.


crude and redneck and on ATS shouldn't imply "average". I would have to agree with CWM that the average person doesn't have a clue who JS is.

The "smart" people here aren't very savvy when it comes to "street smarts".

You are correct. The MSM knows most Americans (99% at least) do not know a thing about John Sullivan.

Therefore, the MSM runs a story about a guy named John Sullivan who took part in the Capitol Insurrection.

The scumbag Trump supporter (implied) sold that video footage to two outlets for $90,000.

Chalk up another Trump supporter on his way to trial and prison.

BTW...Most news articles did NOT include a photo of John Sullivan. Showing that he's Black would create unnecessary questions.

What about the 2 bombs planted in D.C. that didn't explode on Jan 6th? Any attempt tie those bombs to the Trump supporters? That story went away after the FBI posted video of the bomb-planter, and asked for help identifying him/her.

posted on May, 23 2021 @ 10:42 PM
link
a reply to: continuousThunder
And thank you for that reply. I was rather surprised that no one else replied. I've become so accustomed to getting pounded for not towing the ATS party line.

Your title is deceptive. I haven't found anything that comes close to pairing him with Trump supporters. As a mater of fact, there is no possibility of the MSM asserting that posibility.

The defendant stated, “Everybody’s gonna want this. Nobody has it. I’m selling it, I could make millions of dollars.” The defendant also spoke to someone on speakerphone, stating, “I brought my megaphone to instigate #. I was like, guys we’re going inside, we’re #ing # up…. I’m gonna make these Trump supporters f—all this # up…. But I mean you’ll see. I have it all, I have everything, everything on camera, everything I just told you, and I mean everything. Trust me when I say my footage is worth like a million of dollars, millions of dollars. I’m holding on to that #.”

There is all kinds of direct testimony, by his own words in this report of him claiming to be and independent photojournalist. All of the charges against him are listed but there is one charge not listed that should be and that is, inciting riot and attempted murder.
Lots of information and direct admissions in this link.

Don't hype your title. It's unbecoming and should be against T&C's.

Maybe even murder itself if he was instrumental in having Ashley Babbitt climb into that window.


Now your title would be appropriate if you had been talking about Jacob Chansley, the self proclaimed Q-anon shaman. They are portraying him as a Trump supporter.

Could you please point out the many msm articles discussing the BLM and antifa members connection to those organizations and his Jan 6 involvement?

All we’ve heard was those proud boys did it (didn’t you notice they are all white men in their 30s too?!?!?) that was mentioned a few times

JOHN SULLIVAN was careless and got caught. Media/Democrats had to "distance" themselves from Sullivan, because he was connected to the murder of protestor Ashli Babbitt in cold blood by Capitol police goon Michael Byrd, on January 6, 2021.

Evidence of this was submitted to the DOJ by Rudy Giuliani, before President Trump was forced to hand the Presidential reins over to criminal Joe Biden.

Maybe this is one reason why the Jan 6th Congressional Committee is so determined to have that day officially labeled as an "Insurrection", led solely by Trump Supporters/Republicans.

originally posted by: WhereAreTheGoodguys
Don’t have a lot of time to post or respond, but has anyone watched “psyop the steal” ? Kind of explains everything and ties together the bits of info we all picked on as this mess unfolded.

The Sullivan’s should all be in prison being interrogated.
His brother and his father also.

If you have not watched “psyop the steal” I suggest you do.

They have been actively trying to kill the messenger on this one.


Long time lurker of this site, Probably 8-10 years. Thank you for mentioning Pysop the steal, If not I would have never heard of or have watched that until today.