..It doesn't seem like that at all to me. I don't think AATIP investigated 'UFO's' at all, and definitely not any specific UFO reports. The FOIA description (as far as I remember) discusses potential aerospace threats over the next 40 yrs...

There is a lot of confusion between AAWSAP and AATIP. AAWSAP was a bona fide DIA project and the AAWSAP contract was put out for tender in August of 2008.


The contract does not mention any UFO study at all, with the objectives being focused on future weapon systems.

..One aspect of the future threat environment involves advanced aerospace weapon system applications. The objective of this program is to understand the physics and engineering of these applications as they apply to the foreign threat out to the far term, i.e., from now through the year 2050...

AATIP is often linked to AAWSAP. But it remains unclear exactly how. Or even what it exactly it was. Some have said it was a nickname. Elizondo claims it was a continuation of AAWSAP. Others have interchanged both as if they were one and the same project.

However, we do know that BAASS (Bigelow Aerospace Advanced Space Studies), the sole bidder, was awarded the contract. We also know that BAASS used those funds to negotiate a $650k+ contract with MUFON for access to its case files and use of MUFON field investigators. Dubbed as SIP (STAR Team Impact Project). However, other than John Schuessler, MUFON directors and members were left unaware that the government was the hidden sponsor behind this contract.

Some familiar faces represented BAASS to negotiate that contract 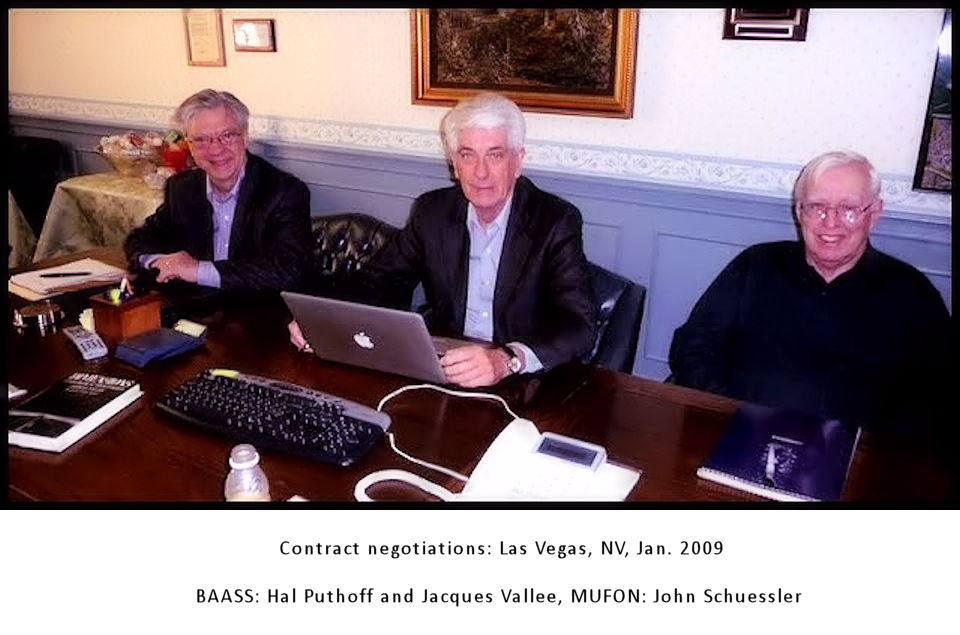 The SIP even produced a number of UFO reports that Keith Basterfield acquired and posted here : app.box.com...

If AAWSAP was not about UFOs (and the contract does not stipulate it) then Bigelow and his BAASS people conducted a study of UFOs with US taxpayer money. Perhaps that could be construed as misappropriation of funds?

..In my opinion, the AATIP was a government handout to a bunch of universities (several in Ohio, coincidence?) and a few insiders that had some private corps. It produced nothing actionable (just look at the titles of the funded grants).

I wouldn't rule out some sort of "money shuffle" or currency purification process for services rendered elsewhere. A number of the authors of those papers have not just close association to Bigelow but also certain alphabet agencies too.

A former official from the DoD hinted at something in a quote in 2017...

..“They produced reams of paperwork. After all of that there was really nothing there that we could find."...

“I was concerned the money was being funnelled through it to somebody else who was an associate of Harry Reid’s,” added the former official, who asked not to be identified. “The whole circle was kind of a bizarre piece.”

This slow release of info, to me, is nothing more than a way to get the public normalized to it. If it's a constant low info stream of "Yes there are things, we don't know yet." then it won't be a shock if something relevant is released.

But I don't see that, I see it more a psyop to just immune people to hearing about it, so otherwise personal evidence becomes lost in the swathe of information.

Then it can be used.... and when the tail wags the dog, no one will even bat an eyelid.

I think this works well and plausible with what you stated.....

Desensitization is a treatment or process that diminishes emotional responsiveness to a negative, aversive or positive stimulus after repeated exposure to it.

Since December of 2017, the Advanced Aerospace Threat Identification Program, or AATIP, has long been touted as a “Secret Pentagon UFO Study” which lasted from 2008 – 2012. However, that has not always been the case to the Pentagon. In a series of conflicting and confusing statements since 2017, the official position of the Department of Defense (DoD) has gone from confirming it was a UFO program, to saying no it was not, to now saying it still was not a UFO program, but it did utilize UFO (or Unidentified Aerial Phenomena / UAP) reports during its research stages.

originally posted by: karl 12
a reply to: Ophiuchus1

a condition in which a person suffers from a sense of powerlessness, arising from a traumatic event or persistent failure to succeed. It is thought to be one of the underlying causes of depression.

Yes, I believe it could happen en masse...

I also believe We are in progress of a new world wide paradigm.

Mark was a truly good guy who did what he could to get the truth out there on alien reproduction vehicles and even alien vehicles with some great detail on their propulsion mechanisms, navigation, frame etc etc

Someone wanted to shut him up and he was suicided for his attempts to inform the public. they need to stop this crap and stop killing people to keep secrets and sequester knowledge especially for "national security", The truth always comes out, maybe not right away but it definitely will. Then we can hold those responsible for essentially committing crimes against humanity.


The recent loss of Mark and Sgt. Clifford stone were extremely sad and a huge loss to the UFO and truth community. RIP gentlemen, hope you guys finally get to see everything that you knew existed and more!

Sgt. Clifford Stone - “Clifford’s passion was his interest in UFOs. He was a huge part of the UFO community. He had two books published and spoke at many venues from around the world. He was described as a “treasure” in UFO circles.”

Within a recent timeframe ...so far we have: