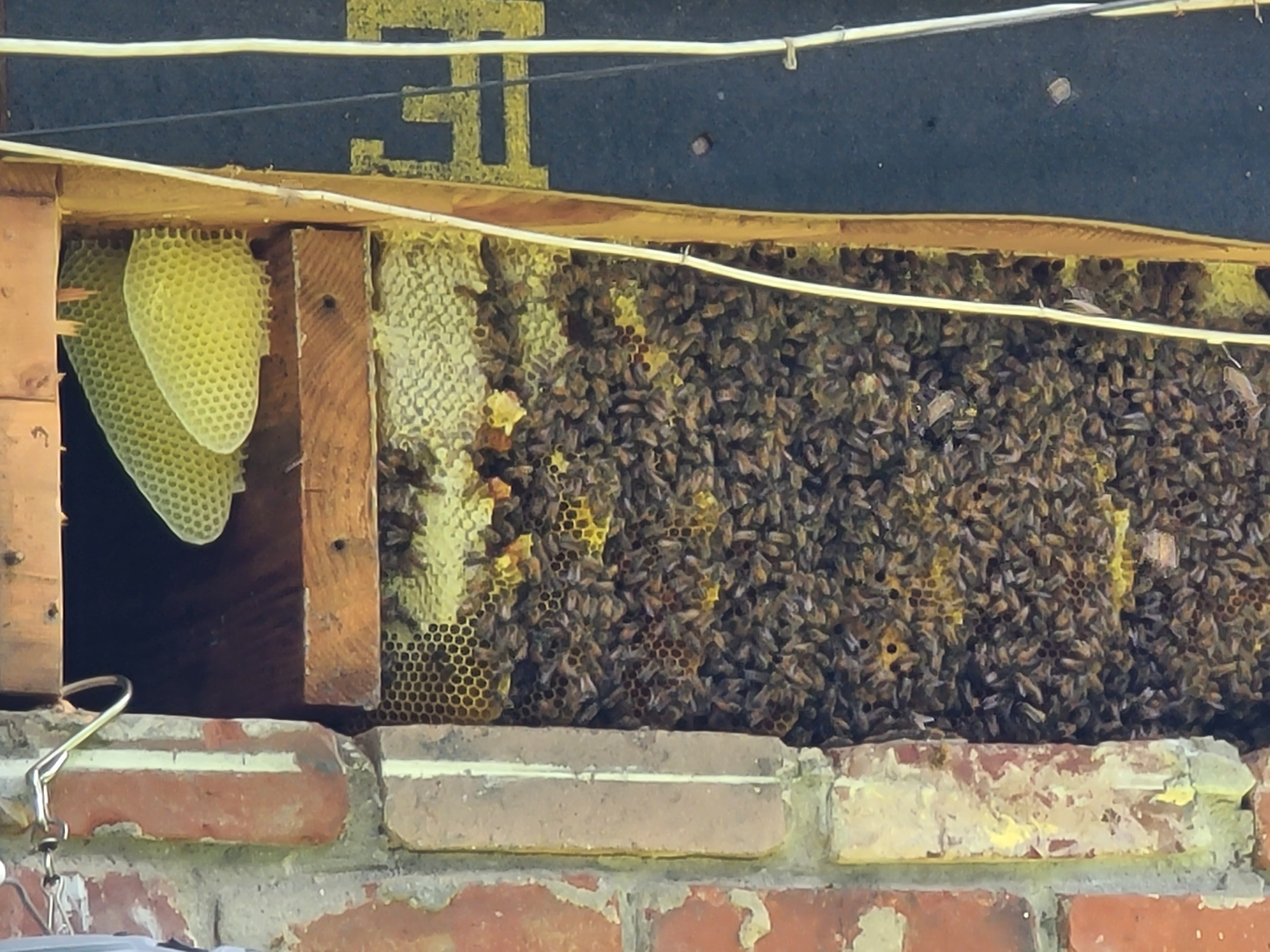 How cool is that!

posted on May, 16 2021 @ 01:25 AM
link
What I find amazing is how they are able to construct such symmetrical structures of hexagonal chambers.

Glad you got someone to remove them instead of destroying them.

Sad to see when people kill them instead of relocating them

You probably had a good reason to move them, but I wonder what could happen if you let them stay ?

originally posted by: 2Faced
What I find amazing is how they are able to construct such symmetrical structures of hexagonal chambers.


Honeybees construct their honeycombs with wax secreted from glands found on the underside of their abdomen. The honeycomb is regarded as an engineering marvel. Why?

Consider: For centuries, mathematicians suspected that partitions in the shape of hexagons were better than equilateral triangles or squares​—or any other shape—​for maximizing space with the least amount of building material. But they could not fully explain why. In 1999, Professor Thomas C. Hales provided mathematical proof for the advantage of what he termed “honeycomb conjecture.” He demonstrated that regular hexagons are the best way to divide a space into equal parts with minimal structural support.

By using hexagonal cells, bees can make the best use of all the space available to them, produce a light but sturdy honeycomb with a minimum amount of wax, and store the maximum amount of honey in a given space. Not surprisingly, the honeycomb has been described as “an architectural masterpiece.”

Today, scientists mimic the bees’ honeycomb to create structures that are both resilient and space efficient. Aircraft engineers, for example, use panels patterned after the honeycomb to build planes that are stronger and lighter and thus use less fuel.

What do you think? Did the superior structure of the honeycomb come about by evolution (as in 'by chance', 'by accident')? Or was it designed (as in programmed into the coding of the honeybee for example, the ability to construct such engineering marvels being encoded into their genetic make-up as part of their instinct)?

originally posted by: whereislogic
What do you think? Did the superior structure of the honeycomb come about by evolution (as in 'by chance', 'by accident')? Or was it designed (as in programmed into the coding of the honeybee for example, the ability to construct such engineering marvels being encoded into their genetic make-up as part of their instinct)?

It wouldn’t be by chance if it were evolution. The most efficient way of construction would have been selected for over generations. For example, if all bees made square comb and then one weirdo beehive started making hexagons, the hexagon May last longer because it would be stronger. The longer the hive lasted, the more offspring would be produced and the more likely that the hexagon hive would split and produce more hexagon hives until all hives were hexagon.

Oh...my...God! I would have them relocated too, but my first reaction would be RUN! Kill! LOL
Yeah, fresh honey would be cool. I would still relocate them.

posted on May, 16 2021 @ 07:45 AM
link
What I think is that nature is more than just a beautiful wonder, but also magical. How can a plant create a flower that exactly fits a certain type of insect, and materialize mechanisms that are able to stick a packet of pollen/seed precisely on the back of said insect. The delivery and acceptance of that packet is equally amazing. Or what about the flagellum? A molecular engine in the truest sense of the word, with all the attributes one finds in a regular electric motor. Not to mention what goes on in each and every single cell in our body.

So, to think that all these things appear/evolve randomly, out of nothing, or by natural selection, would be an insult to nature. There are too many indications of intelligence at work. Evolving is one thing, but (imo) some things need some sort of thought proces before materializing, constructing, or adapting to a set of circumstances. I just think there is much more to our world and universe than we can explain with the notion of evolution alone, and not necessarily driven by some sort allmighty entity that makes unilateral decisions.

That's beautiful! I'm glad they were relocated and not destroyed. Bee Lives Matter! 🐝

I remember studying bees and what always fascinated me was their Waggle Dance. 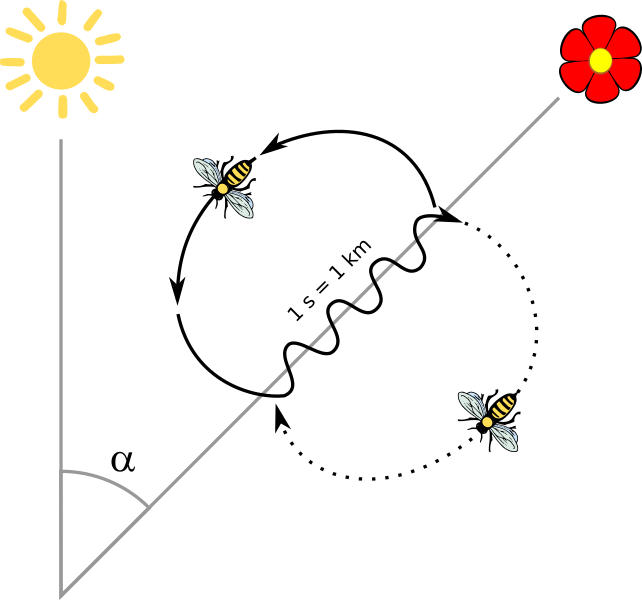 The waggle dance - the direction the bee moves in relation to the hive indicates direction; if it moves vertically the direction to the source is directly towards the Sun. The duration of the waggle part of the dance signifies the distance.

Take it they would not beehave.

Buzzing for you anyroad.

I've had a bee nest in my roof, and every room was filled with bees, and they're not polite about it.

I don't even like honey that much. so roof bees be gone, I say. Sure if they're up a tree, fine... but nope. hundreds of flying crawling buggers that sting you. And people are afraid of spiders... at least spiders don't fly at you and make your extremities swell up on contact.

originally posted by: andy06shake
a reply to: Vasa Croe

Take it the would not beehave.

Buzzing for you anyroad.


Suddenly a wild cane appears left of stage and drags you off by the neck...

posted on May, 16 2021 @ 08:17 AM
link
This happened to my friends house once. The bees had taken up so much space, they started flooding his bedroom. He woke up covered in honey bees. Needless to say, he was freaked out, and to this day hates bees with a passion. As for the bees in his wall, the queen was successfully removed and placed in a hive on their property.

Would not be the first time i was huckled off in shame like.

Anyroad im bang on about the raw honey, its the "bees knees".

originally posted by: 2Faced
What I find amazing is how they are able to construct such symmetrical structures of hexagonal chambers.

Sacred geometry is real. The structure of the universe is full of patterns.

If we wish to describe the Universe, as simply and completely as possible, it takes just 26 dimensionless constants to do so.

I take it the pattern you are on about through is Phi, or the golden ratio, aye that's just about everywhere and apparent in just about everything from the smallest Mollusc shell to Spiral galaxies thousands of lightyears distant.
edit on 16-5-2021 by andy06shake because: (no reason given)

posted on May, 16 2021 @ 09:03 AM
link
did you have honey dripping down the walls, or a constant buzzing noise? I'm curious as to how you realized they were there.

You could have just let them stay and installed a drive through window they could deposit a little honey for you in a tiny cone when you knocked on the wall....for rent of the space.

I wonder if the government would give renter protection payments to you since evicting is being frowned on now.