Here have a biscuit! 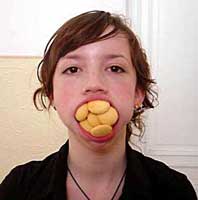 The reason I say that is you are stating to all of us in the States as if it is out problem to solve it. I am asking you the same thing.

Critical Race Theory is indoctrination. It is a tool of the Progressives in the US to teach what they want and not allow critical thinking or discussion. If you disagree they scream racist.

Anyone teaching their child Critical Race Theory is raising a bigoted little Marxist....

Hey let you country bow to the mob and let history decide how far up your ass you can shove that biscuit
edit on 13-5-2021 by EvanB because: (no reason given)

They make us sick, too. It's ironic... Most of bLM is filled with white people acting like they know what's best for black people. I'm just waiting for the day these black militant people wake up and go after the low hanging fruit.


Harry and Meghan are fair game. We hate them


Who doesn't? Megan is a great example of how fast a lib can ruin something. I don't think there's been a newcomer to join the royal family and tear it apart faster than Megan has, and we're talking about more than 500 years since Bloody Mary was Queen.

Has anyone here been actually and specifically impacted by woke? I read about it a lot but it's never had a direct effect on me or anyone I know.

Yes. My family. My son worked for 3 years to go to a certain college prep school in our area. A very good school that would have truly benefited him.

After he started his first week he was called a racist because he thought finding a cure for cancer (my mother died of stage 4 in 2019) was more important that BLM. It was a class discussion and he was bullied for it. Online and on Zoom. The teacher and admin said he should know better than to go against specific thinking. Can you imagine because I never did that it would be that bad. This is not Berkley. It is a HS.

The next instance was he recorded secretly by another student because some of his friend sand he were talking about Trump at Lunch. The friend was asking them questions and baiting them. As 13 year olds they did not get it. Nothing rude or bad was said just non support for Biden. Admin suspended my son and his friends for 3 days for disimformation (yup like it was 1935) and the kid who recorded it nothing. In fact he got a concil position at the school. After that the same kid then spread more rumors about how my son hates blacks and gays to the point he got in a fight after he was confronted for the 3rd time. The first 2 I told him to let it go. 3rd strike defend yourself and he did. 3 months in he was withdrawn and i had a fight verbally with the principal. He is now homeschooled and will be till he graduates.

A British trait from waaaaaaaay back.

Correction.
A human trait from waaaaaaaay back.

I think wokism is more advanced in the USA but it has far too much influence over here too.
Where did it start?
Does it really matter?
The important thing is we do everything to oppose its advancement and eradicate it.

posted on May, 13 2021 @ 05:02 PM
link
My children will bend the knee to no man or be cohearsed to do so or will be made to feel ashamed because the colour of their skin or made to feel second class in their own country

I am a soldier. . A British soldier.. And didn't put my ass on the line so some yank American fckwit can have a safe space and demolish monuments that bought democracy to the world and freed slaves. Died in the trenches in world war one and in world war two died in France, North Africa, Italy for you!!!!

For you sat there!!

For freedom of speech and each other


I am determined to crush wokeness and have no problems crushing their safe places
edit on 13-5-2021 by EvanB because: (no reason given)

Seems to me you're making up infections. And painting with a pretty
wide brush. Just to brag about biscuits and tea and have something
to bitch about. Sorry amigo but the pandemic won't allow us to
cross the pond. Not just to come over there and discipline your
monkeys. We got enough problems with our own snowflakes. Maybe
you got a biscuit stuck in your own blow hole. I can't tell from over
here but maybe you need to blow it out your ass.

I'm English, and white. Have a Masters degree in Engineering and am former UK special forces.

You are a product of us. Even the revolutionary war of1776 was an English civil war.

Your language is English too

Your bored entitled children are infecting mine online


I'm beginning to think you're more special Ed than special ops.
edit on 13-5-2021 by Randyvine because: (no reason given)

It's not America. It's progressives and liberals.

Maybe you should put at least part of the blame on Social Media, and not solely on America.

The Trident of evil:

All American though if where honest.

Looks like your nation's political idiocy and woke STD stemmed from within, amongst your own homegrown retards... same as the USA's did.

The mistake was all of our nations permitted this crap for far too long and now we're all paying for that tolerance and inaction.


Ahh, Its CornishCeltGuy back to wind us up! LOL Welcome back man, I almost didnt recognize you. The year two level grammar threw me off.


Yeah I know, I fell for this fools rhetoric, but to be fair its hard not to snap back at stupid OP's like this. I mean my poo thread got shut down after 2 minutes and this drivel is allowed to fester for days.

I'm not Cornish Celtic thingy my name is actually Craig. I am former UK special forces which is something I shouldn't advertise on a conspiracy site :/

I am however very sorry I posted this. Maybe a sobriety test should be added