Thanks to Biden horrible energy policies, gasoline is almost 100% higher here in the Chicago suburbs today than it was at christmas.

yesterday they were running out of grades before 11:am here, tried to get some then the stores by the house only had nearly 4.00 dollar a gallon premium. didn't get it i refused to pay that much a gallon, had enough to go where i needed to go and i was running late so i waited. by 2 in the afternoon every store in a 15 mile radius was sold out except 4 and they had line almost a 1/2 mile streched out on the road. today nobody has any.

but it's just not the hack on the pipeline here. the local tank farm at the Port of Pensacola failed a EPA inspection and is shut down. local news said the tanker trucks are having to go anywhere from 5 to 6 hrs one way to fill them and come back.
sucks to be here now even worse than it was getting.

ETA: must have got the news reports mixed up, here is the local report. it says that there is a truck driver shortage. last night is when i heard about having to 5 to 6 hours away, might have been on the national news and not the local news.


However, the Florida Department of Agriculture said Monday afternoon that the Colonial Pipeline hack is one reason for the gas shortage, while a truck driver shortage is another.

The agency added that the Pensacola fuel terminal is also to blame, saying the company didn't meet EPA standards required by May 1.
Pipeline hack, local terminal's failure leads to gas shortage in Pensacola

Thanks to Biden horrible energy policies, gasoline is almost 100% higher here in the Chicago suburbs today than it was at christmas.

Yea I saw it and it was a stupid thing to say, that helped feed the panic whipped up by the media using inflammatory rhetoric, it was a hack not like someone blew up the refinery.


We had the same probs in FWB after a hurricane cuz the panhandle is serviced by barges. Still, trucks gotta take the fuel to Texaco. Need to train up some gas passers asap sounds like.

i actually live in Milton, off Hwy 87 south. about a mile from Eglin's outer ranges, just north of Boiling Creek.
lived in Pensacola as a kid, moved here when i was 12

And now confirmation a refinery in Israel I think was hit and is burning....perfect timing!

what an amazing coincidence...

yea nothing to see here.

originally posted by: Vasa Croe
Lines are huge all around outskirts of Atlanta....

And now confirmation a refinery in Israel I think was hit and is burning....perfect timing!

Welp, there goes my travel plans next week, not wanting to get trapped.

i use to do service calls on kitchen equipment for restaurants, the company/ then mine was in Pensacola. we would go as far as Panama City on a call. i would take 10 in the summer cause 98 sucks back then to, now forget it.
i'd get off and take 85, down to FWB, now you'd have to beat me to g that way.

posted on May, 11 2021 @ 02:49 PM
link
I don't expect this to cause a shortage here, but do expect it to increase gas prices though. Our governor will be the one that raises the prices of fuels here by stopping line 5 that supplies much of the UP with fuels. Hopefully where our suppliers get the gas they won't take it out on us for what Whitmer is doing with their loss of supplies. 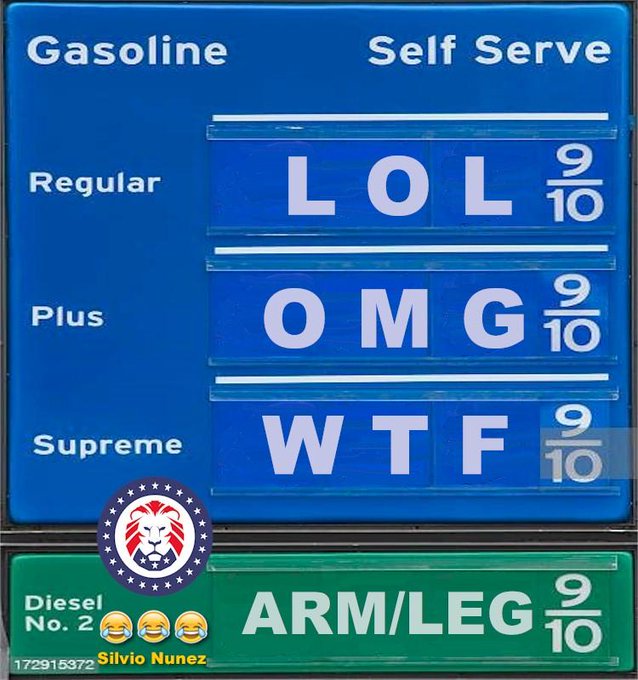 originally posted by: lakenheath24
Sweet baby Jesus, that is turrible. I just paid $110.40 to fill up my Volvo in the UK. 60 litre tank. Just sayin.


That's turrible for us in the UK. The Americans are talking about $3.25 a gallon, that's $.65 a litre, in the UK that would equate to £2.36 a gallon.
Now us in the UK are paying £1.30 a litre, that's £6.50 a gallon roughly because a UK gallon is slightly larger than a US gallon.
Now translate the UK price to the US price and it works out at $8.94 per gallon. Now who's paying most for fuel? Wouldn't you like the US price?

My local pumps jumped 15 cents in a day,so far.

In my defense wifes out of town and Im at home with a sick toddler but after running all over town dr visit and pharmacy visit and work to verify what leave I was taking my old jeep is sitting low.

With the Green New Deal Biden wanted gas at $6.00 a gal. But these disasters can at times go out of control. Like a controlled burn that jumps the fire-lines and takes out 2 or 3 counties.

Just saying Biden. This is a real bad time to be playing with fire.
The Apocalypse is running BTW. And the black horsemen is watching.