originally posted by: ANNED
Criminals do mass shooting and the media reports them.

What is wrong with this??? Why don't the criminals get the electric chair. And the law-abiding get a free pass to shoot criminals caught in the act and save the taxpayers a lot of money.


Criminals might want to shoot more people so they take away the guns from the people they rob. Sounds sensible to me. Rewarding thieves is what our government seems to be pushing these days.

posted on May, 10 2021 @ 10:19 PM
link
I noticed this too. If it's cop violence it's rascist (only white cops vs minorities qualify). If it's gang violence or civilian on civilian violence the answer is take away everyone's guns. There are no other narratives to these.

Oh and NEVER EVER mention maybe the whole defund all police just MIGHT have a consequence of a lot more crime. No. The answer is clearly let's take away law abiding citizens way to defend themselves...as if people can't see both sides getting played against the middle...I'm so done with America right now it's went full retard there may be no coming back or stemming the utter tsunamis of complete BS ...wave after wave I swear. k rant done.

Geez , maybe they should stick to Hysterical Reactions to Snow Falls Instead.............


Gawd I wish I could speak freely about what I'd like to see happen at CNN.

CNN thinks with the mind of a college girls dorm. Spoiled snooty
with no semblance of street smarts. And they damn sure don't
understand gangs. It's only gonna take one gangster to see what
CNN or any news work is doing. And if just one member in one
gang stirs the word "Rat" with CNN. Well just don't be surprised
when bullets start zipping passed their heads. You won't need
to wonder why.


CNN reporters have been driven away from covering at least 2 BLM-ANTIFA protests/riots this year. The network creating more enemies than our illegitimate President.

It's hard (for me) to understand WHY AT&T is keeping CNN in its corporate family. CNN drags down the famous/historic AT&T image tremendously.

posted on May, 10 2021 @ 10:46 PM
link
i named my children donnatello and rapheal (go f yourself michealangio)
rocksteady & bebop was a step too far.

posted on May, 10 2021 @ 10:47 PM
link
Whos supplying the streets with guns? The FB I...The CI A. Are the FB I paying provocateurs? Where are the drugs coming from? Open border policies? The Dema are creating the perfect storm and its going down as sure as I write this. a reply to: panoz77

posted on May, 10 2021 @ 10:51 PM
link
Very possible...MKUltra. with a Mocking Bird media spewing propaganda you have a cocktail ready to ignite. a reply to: asabuvsobelow

How many people just got shot by the government with who knows what?

People actually flocked to get stuck with that crap. I am really worried for them too. None of my family members did. We all got sick over a year ago, and nothing since.

How are they going to blame us when vaccinated people start dropping like flies. " Oh look over there! dangerous guns! 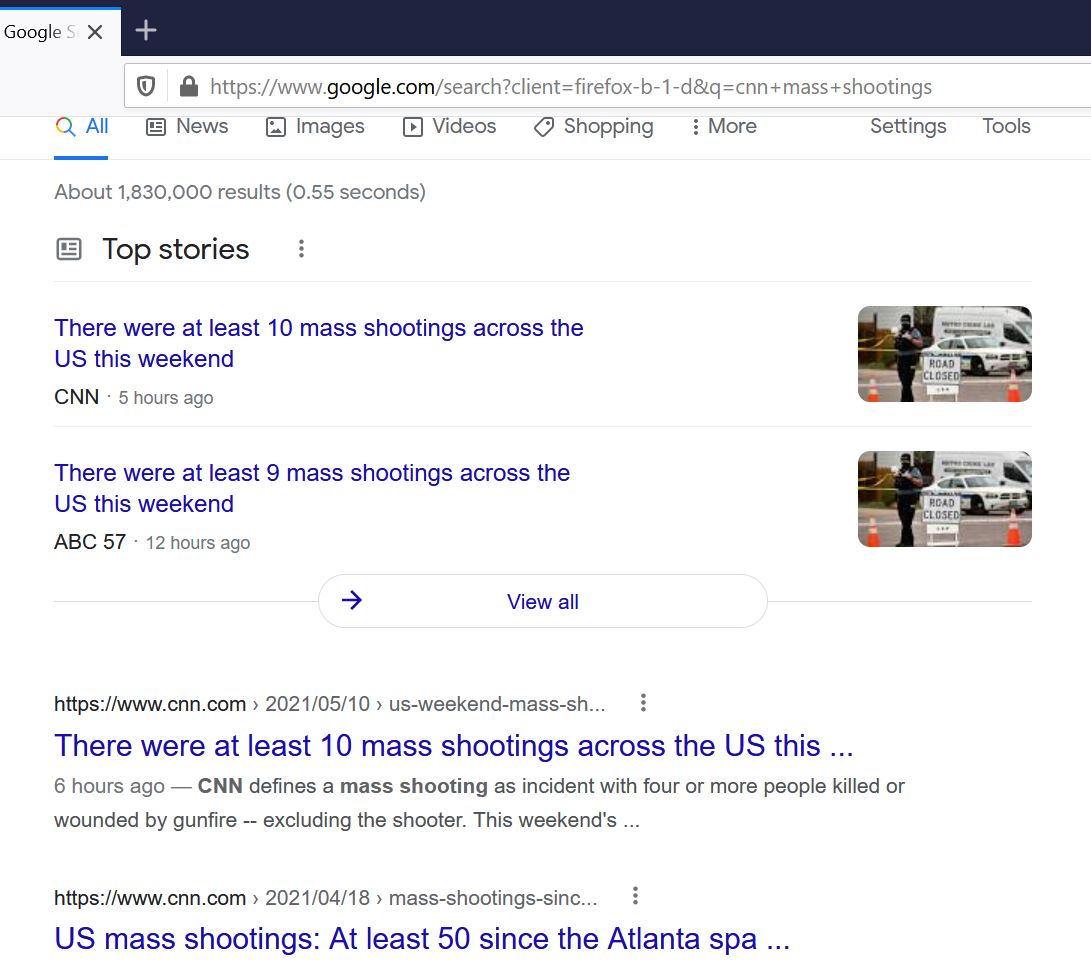 "There were at least 10 mass shootings in the country over the weekend that combined left at least 17 people dead and 33 more wounded, according to CNN reporting and an analysis of data from Gun Violence Archive (GVA), local media and police reports.
CNN defines a mass shooting as incident with four or more people killed or wounded by gunfire -- excluding the shooter."

"According to the Gun Violence Archive, at least 117 people were killed and 303 wounded in shootings across the country over 72 hours."

"This weekend's shootings provide a glimpse into the rise in violence that began last year and that has continued ever since. Criminology experts have pointed to a perfect storm of factors, including economic collapse, Covid's severing of social connections and mistrust in police."

"Philadelphia
The city saw 14 shootings, including one in North Philadelphia where five people were hit by gunfire, Police Chief Frank Vanore said.
Cpt. Jason Smith said in all seven people were killed.
In the most violent incident, two people were fatally shot and three others went to the hospital with gunshot wounds, he said.
There have been 185 homicides this year, a drastic increase over the same time frame last year, according to Smith."

"Phoenix
An overnight shooting at the Hyatt Regency Hotel left one man dead and at least seven others wounded, Phoenix Police Sgt. Margaret Cox said at a news conference Sunday.
A group attending an event at the hotel got into an altercation that resulted in the gunfire, Cox said. All of the victims are believed to be between the ages of 18 and 22."

"Woodlawn, Maryland
Three people are dead and another was injured during a shooting at a town home Saturday morning just outside of Baltimore, authorities said.
Police responded to a call for an active shooter and fire scene at a town home community in the Woodlawn suburb, the Baltimore County Police Department said in a news release."

"Newark, New Jersey
Four people were injured in a shooting in Newark on Sunday, according to a tweet from the police department.
Two men and two women "were injured by gunfire," according to the tweet."

"Milwaukee
Authorities in Milwaukee are investigating a shooting that injured four people on Saturday afternoon, a news release from the Milwaukee Police Department said."

"St. Louis County, Missouri
Two people are dead and three others injured after a shooting in a park in Kinloch, on Friday night, St. Louis County Police said in a news release.
"It was all peaceful and beautiful and next thing you know ... gunfire just erupted," Willoid Williams, who witnessed the shooting, told CNN affiliate KMOV. "

originally posted by: Bigbrooklyn
Whos supplying the streets with guns? The FB I...The CI A. Are the FB I paying provocateurs? Where are the drugs coming from? Open border policies? The Dema are creating the perfect storm and its going down as sure as I write this. a reply to: panoz77


A criminal with a long criminal record gets a girlfriend with no record to buy the guns, and he then uses the gun to do crimes.

What I hear is "strict guns laws in individual areas are useless when counties or states right next to them have lax laws. What we need is a strict nation wide regulation to keep guns in the hands of law abiding citizens and out of the hands of criminals"


So criminals will finally follow nationwide regulation? Who are the people most effected by strict regulations...lol


Crime in general and murders are up all over the place even as high as 500% in some places, so I wonder what has caused that? lol

It always amazes me that there are people who really believe that criminals will obey these laws. This is one of the reasons the U.S.A. is in the shape it is in right now. These people drive cars, have offspring, vote, hold government office and operate dangerous equipment. They are the ones who listen/follow the msm blindly. God help us.

posted on May, 11 2021 @ 07:07 AM
link
The irony in all this is that the only thing that seems to stop a shooter is the threat of someone showing up with a gun. I still notice that all high-level government officials, the pope, many celebrities have gun-toting protection to minimize the chance of being shot by someone else.

Funny that so many of these mass shootings were in California, NY and Chicago, the cities with the most strict gun laws. Hmmmm.

This is actually what news is like in other countries. It's pretty common for international news like this to be reported. Most mass shootings in the US are reported by the big networks in Europe, for example.

originally posted by: Zrtst
The irony in all this is that the only thing that seems to stop a shooter is the threat of someone showing up with a gun. I still notice that all high-level government officials, the pope, many celebrities have gun-toting protection to minimize the chance of being shot by someone else.

Typically, no. The person with the gun usually shows up after most of the shooting is over. Especially in school shootings. A student walks into a classroom with a gun and fires of an entire clip before the armed security guard at the door knows what's going on. It takes the guard at least a couple of minutes to even determine where the shooting came from. I seem to remember that even when there is a a security guard on the gate or a cop close by usually takes at least 15 minutes for them to determine what's going on and to react. By which time the shooter has done most of their shooting and it's turned into a manhunt or a siege.

In the case of events like Virginia tech there were armed guards on campus, there were cops nearby and multiple students were armed. Nobody got a singe shot off at the killer during the spree. In fact most of the armed students ran and hid because they were afraid that they'd be mistake for the shooter and get shot themselves by the cops. I think that I remember reading that the members of the student rifle club barricaded themselves into a room specifically because they were afraid that they'd be mistaken for the shooter and would be targeted by cops looking for the real shooter.

When you have a mass shooting you want to make sure that everybody except for the gunman is in uniform, otherwise it's chaos. People would shoot each other.

Funny that so many of these mass shootings were in California, NY and Chicago, the cities with the most strict gun laws. Hmmmm.

They should get Dr Suess to write a book about it....make it more like peaceful bullets that have no bearing on where they end up.....Bullets Lives Matter!


How about dale gribble?
youtu.be...

Report on all the people dying from the Covid vaccines.