posted on May, 9 2021 @ 04:09 AM
link
Remember all those cool videos of people scared to walk across those high mountain glass bridges? But there is one guy who won't go on another one for a while. Yep that's a man holding on tight.

Pic says it's 100 meters but it looks like it may be higher than that. 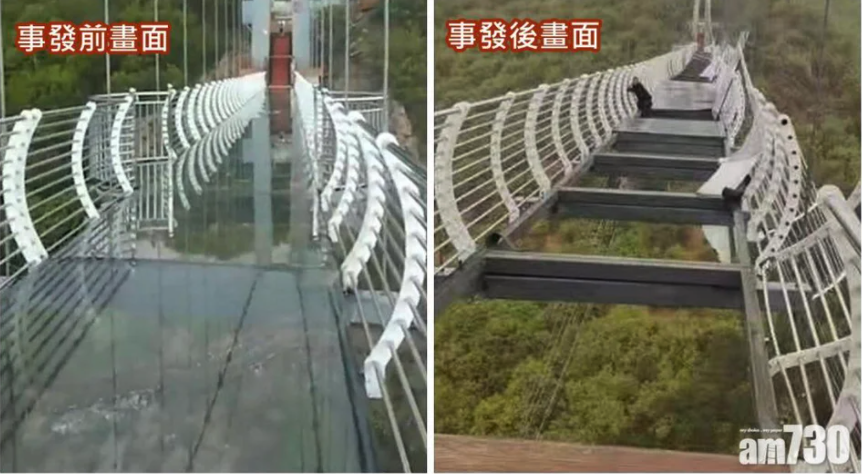 CHANGCHUN (Xinhua): A tourist was stranded on a glass-bottomed bridge on Friday (May 7) at a resort in northeast China's Jilin Province after it was damaged by a gale, raising public concerns over the safety of the growing number of glass bridges across the country.

Several pieces of deck glass of the 100-meter-high bridge were blown off by the wind gusting at a speed of up to 150 km per hour around 12.45pm at the Piyan Mountain in the city of Longjing, according to the city government.

Under the joint rescue efforts of firefighters, police, and forestry and tourism personnel, the male tourist successfully crawled to safety at 1.20pm.

He has been sent to a hospital and is receiving psychological counselling.

Although no casualties were reported, the incident has drawn many discussions online, with over 4 million views on Twitter-like Sina Weibo.

"This is exactly why I dare not step on a bridge like that," wrote a netizen named "Wadetian."

"How often did the bridge undergo maintenance?" another netizen inquired.

Glass-bottomed bridges are becoming increasingly popular in China's mountain resorts as a way to attract tourists seeking novelty and adventure.

According to Earth magazine published by the Geological Museum of China, at least 60 glass-bottomed bridges had been or were being built across the country as of late 2016.

Lol never ever would I go on such a thing, on a bad day I get vertigo on stairs, or chairs...

posted on May, 9 2021 @ 04:39 AM
link
When I first looked at the pic, I thought he had just gotten too scared after he got out there. It took me a minute to realize pieces of the glass floor had literally blown off of it. Now that would be terrifying.

originally posted by: Peeple
a reply to: putnam6

Lol never ever would I go on such a thing, on a bad day I get vertigo on stairs, or chairs...

It's weird sometimes heights don't bother me, other times in the right situation... like when I used to go out on the roof of 20 story office building we worked in and just look off the edge to the street below. Pretty sure at 20 stories is tall enough to reach terminal velocity

Yea, and it looks like a lot of the railings got damaged too along with the panel he was on.

It's pretty surprising really. I would have thought the glass was secured with some sort of clamp or brace holding it down, and not just relying on it's own weight to keep it in place.

originally posted by: BrokenCircles
a reply to: putnam6

It's pretty surprising really. I would have thought the glass was secured with some sort of clamp or brace holding it down, and not just relying on it's own weight to keep it in place.

It's China... it's all hot glue and using a soldering iron to make screw holes

damn, I wouldn't buy a bridge from shenzhen if they walked over it to give it to me.. lol
edit on 9-5-2021 by jerich0 because: (no reason given)

"If the virus doesn't get you - try our bridges".

I would go on one of these.

But I wouldn’t go on one in China.

posted on May, 9 2021 @ 06:57 AM
link
You have to be an absolute madman to walk across one of these things I reckon. Especially one made in China.

They look like something from a Mission Impossible film.

posted on May, 9 2021 @ 07:05 AM
link
I’ve had one or two nightmares of that exact scenario, the ones that seem absolutely real, crawling on hands and knees or my belly knowing that one wrong move brings the end. This dude was living it.
Nope, not for me.

I would be checking each and every pane of glass with my toes. Or, I could follow a guide. If he drops out of sight, I turn around and go back.

What does it matter how high it is. It is seriously over the height of Death.

Only surprise is this got into the media. But then it covers a successful rescue, no word if any others were on the bridge at the time….

posted on May, 9 2021 @ 07:27 AM
link
So this guy gets phycological counseling because the bridge failed, but the slave children who built the bridge get to die in a ditch behind the factory.

Typical communist nation- if this guy was a citizen and not a tourist they'd just toss him over the bridge to make sure this story never broke.

Of course, nobody who grew up in a country without safety regulation would need counseling for such a thing. Must've had too much safe-space time growing up.

I suspect the lateral and vertical movement of the bridge from the wind had a lot to do with the panels coming loose. I doubt any of those panels "blew" anywhere; they more than likely just fell out from the framing racking around in the wind.

At least China is spending on investing in their own country to build the economy and provide a better future for their people. What are we investing in? Prisons, bombs, woke education, welfare forevermore, etc....

Their star is rising. Ours is falling.

You would think that the bridge would be closed ( Have a barrier automatically come down at the entrances) during rain, storms and adverse weather conditions.