Democrats Cancel Mom to Go One Step Away from Breeder

Most people where I am at don't bother either. Where I work, it's a bit different because you have to think of all the angles when you're proofing and editing for a client.

You can't make those assumptions anymore, not safely.

That bad, I am glad I do not have to deal with the its, right now, I mean the ones that can not make up their mind what they are.

Eh, it could be worse. For the most part, if I run into something truly awkward, I can pass the direct questioning along to someone else to ask. All I have to do is notice the discrepancies and question them.

I put this right along with that economist that referred to people as “human capital stock”. I guess this is the type of terms people come up with when they try to out do one another in stupidity. Leftist sometimes talk about diversity of thought. I can guarantee you that there was no diversity of thought present when coming up with this term.

I mean scientifically speaking I was "bred" into existence.
Sadly, I didn't sprout from a cabbage patch.

But let's wait for "Father's Day", because I heard from an 18-year old the other day, I don't have a dad, I just have a "producer".
Yip, and there's millions of young men like that these days.
How lucky I am, both my parents are still alive, and I hope I let God know how grateful I am.
It wasn't always the case, I sure hated them at times when I was younger, and maybe they're disappointed I can't do the same, and no grand-kids.

But if I look at what's going on in society these days in SA and the future prognosis - right now, it turned out for the best for us.
edit on 7-5-2021 by halfoldman because: (no reason given)

That's what we're celebrating this weekend. You aren't a mommy; you're just a birthing person, which seems to me to be a thinly disguised reference to being a breeder.

I find it offensive.

I am a mother, and this weekend is Mother's Day, not a day to celebrate breeders. A mother is more than just someone who gave birth after all. Plenty of people who gave birth never bothered to actually do the job of mothering their own children.

But here you have Ayana Pressley engaged in the derogatory Newspeak: 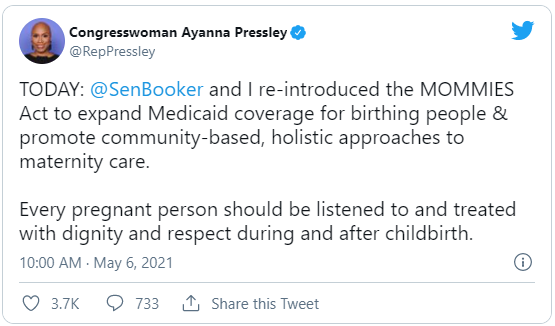 And here's Cori Bush doing it.

I would ask the ladies if they think taking on a slur is empowering, but we know the answer to that. Of course, in order to the make the whole thing complete, all gays would forever have to be banned from uttering the term breeder again.

(Caveat: Assuming most voting Americans are "normal" in the traditional sense.)

posted on May, 7 2021 @ 10:56 PM
link
a reply to: carewemust
This issue only plays to the base and in that context doesn’t really move the needle much when it comes to elections. Look at social issues and how they ranked in terms of importance to the electorate in the run up to the 2020 elections and they barely crack the top 20. People will always vote for their security first: economy, health care, defense.


All rules for POLITE political debate will be enforced.
Members must also Stay on Topic!!!
Trolling, And What To Do About It

These people are just straight up #ed up #-ups, end of discussion. They can't hack being a boy OR a girl, so they jacked physical sex & mental gender. They can't handled being adult enough to manage getting laid, so they fricking jack sexuality & orientation. Now they can't hack being anything but a USELESS, aimless breeder, so they jack parental titles now. Whoops, I bite back, and don't care if your feelz got hurted, useless breeders. I'm a mom, and you just suck because you ain't happy being YOU as you are, OR under any other title you give yourself. You're basketcases. Blow me.


which seems to me to be a thinly disguised reference to being a breeder.

Well how else are they going to encourage more taxpayers being born?


But here you have Ayana Pressley engaged in the derogatory Newspeak:

"every pregnant person should be listened to"

Well then the great reset happens and we cant own anything, and be paid a UBI, and have to rent everything;

you could charge back to the Government the use of your uterus for doing your bit for the economy!

36K for making a baby


We have psychological exams for military and police, why are we not testing candidates BEFORE they take office?

posted on May, 8 2021 @ 12:13 AM
link
OK, going to be quite frank, but black neighbors moved into the house opposite us.
I mean it's probably invariable these days, just giving an idea of what was once apartheid-planning.

I recall they had a huge, what sounded like a church service before the lock-down last year.

Since then all is very quiet, and I hear it's two female relatives (not sure) living there and their kids.

One day, mom and me returning from shopping, and I'm looking all butch, waiting for the automatic gates to close in the driveway, and this little kid shouts from across the street:

"Is he going to get better"?

And a few weeks later, that boy happened to be outside, and when he saw me, he was so happy. He was jumping.

I said to mom: "You know, I'm not used to anyone being that happy when they see me".

In my history, my visibility usually meant some confrontation.

And you know, the way queer men have been framed as molesters, maybe it's safer for me to hide behind the shrubbery (my ingrained homophobia and fears). People didn't always look kindly on me, especially as I smoke ganja. Not anything bad I am, but what others projected onto me.

But no, I couldn't do that.

And all it took was a "Hello".

Perhaps it really does take a village these days.
We'll see.
edit on 8-5-2021 by halfoldman because: (no reason given)

HCStock has some usefulness amongst economists, but it goes way back to Adam Smith


This line of thinking dates back to the earliest days of economics. Adam Smith, for instance, famously suggested that the “fixed capital of society” includes “the talents and skill which certain members of the community have acquired by time and expense.” But the modern concept didn’t really take off until the 1950s and ’60s, when it was popularized by University of Chicago economists Theodore Schultz and Gary Becker, who argued that viewing the world in terms of human capital could help explain everything from differences in economic development to income inequality.

The idiot who wrote that mess in the OP (not the OP, but I'm trying to type this within T&C... and it is hard!) will never be a mother. She will never have the experience of contributing to the next generation the way a mother can. The best she can ever hope for is to eject some human cells she can then spend time abusing.

The day after tomorrow is Mother's Day. It's a sad day for me in one important way: I lost my mother a few years back and I still miss her. I imagine I always will. I will find a nice quiet place in my mountain and grieve for a few moments while I remember her. But it will also be a day of joy, as I watch my kids celebrate their mother, my wife, who I watched spending endless hours teaching, consoling, and caring for both of them. I couldn't have done her "job"* to save my life, but then again she says the same about mine.

She was no "birthing person"... she was and is Momma. I was no sperm donor; I was and am Dad. Nothing some half-wit (trying to be nice here, again, assuming it has functioning neurons at all) political hack pretending to be a leader says will ever change that. All its words can do is prove to the rest of us that it has absolutely no respect for anyone or anything but itself, and that the inhabitants of Massachusetts, should they ever elect it again to represent them, are just as worthless and pitiful.

To all who are reading this and are mothers, Happy Mother's Day. You deserve a day of your own; heck, you deserve a month all your own. Thank you for all the trials and torments you endure, and may your children never forget that you are more than just a woman. You are Momma.

* The word "job" is itself almost as inaccurate as "breeding person," and is in no way intended to infer that raising a child is a bad thing. I wouldn't trade the hardships I endured while raising my kids for anything in the world and neither would my wife. Parenthood is the greatest joy a human can ever know, despite being the hardest undertaking one can assume.

This is not the Democrats, it's a tiny subset of people so far out there, they need their own category.


I wish I could agree with you, but the past few years have shown me otherwise. Were this a small subset of twisted life-forms amongst a larger group of people, they would be censured for saying things like this. The simple fact is that the larger group either agrees with them or... or nothing. They must agree, as they continually allow these... things... to speak out for the party.

No, it's the Democratic Party as a whole. I hate saying that, I don't want to say that, but there's no other explanation. I can only hope that the average Democrat voter simply doesn't realize what they are voting for... but lately I have begun to question even that hope.

With al the sh&t happing in SA you'd think your gayness would be he last thing on others mind,


And you know, the way queer men have been framed as molesters


will never be a mother.


Apparently has a stepdaughter `- couldnt be bothered using her own uterus?

posted on May, 8 2021 @ 12:49 AM
link
a reply to: TheConstruKctionofLight
I take then it has a place but I think the way he used it came across wrong. Same thing here, I get that there is something to be acknowledged or create awareness of but engineering a new term that tears down the fabric of something so important as motherhood is a level of wokeness that even I as a leftist wouldn’t want to be associated with.

Apparently has a stepdaughter