Honestly, this just is NOT natural to me. And why arent any women competing in mens sports if their is no problem? Her competitors should boycott as they got zero chance...unless they roid up.

You work hard your whole life.
You make it to the ultimate competition.
Now you find out you have to compete, with someone built different than you.

I'd be more than a little... peeved about that.

I absolutely agree and ive said it before.
There should be a third category for sports. Mens, womens and trans. Simple and it would stop all the unfair heartache the female competitors will face. Its the only logical way to sort this out.

originally posted by: chiefsmom
I don't understand how this is ok, or fair.

You work hard your whole life.
You make it to the ultimate competition.
Now you find out you have to compete, with someone built different than you.

I'd be more than a little... peeved about that.


Indeed. To make it fair HE should compete against a forklift.

And why arent any women competing in mens sports if their is no problem?

Yeah, this is the crux of the issue right here too! To be fair though, there are some women who compete in men's sports, but not sports which require raw strength like power lifting. And, to be honest, I would have no problem with a gal being on my baseball team, or basketball team, or any number of other sports team if she could hit, or shoot, or field, or run. On the flip side of the same coin, I would think girls teams would have major objections, and rightfully so, to guys playing on girl's teams. This is especially true for individual sports. It's just not fair.

I agree with others who call for DNA testing to determine what sex you are allowed to compete in. It's easy enough to do.

This dudette thinks he / she is some type of athlete - HA! Try a fat tub of goo.

My gawd the narcissism is at critical mass on this planet.

What worse than a confused narcissist?

Clearly they are just taking the piss out of us at this stage, not the trans people themselves but the people pushing this BS. I mean of all the sports out there, the first man to compete as a women is in weightlifting!

I know people who are gay that are strongly against kids being given drugs to prevent puberty or to help ‘transition’ there sex. This is because despite how they feel they haven’t developed the emotional intelligence to make a judgment yet. It’s ridiculous how some are encouraging them to change sex when it’s still illegal for them to even have sex!

Like I say someone is taking the piss, just to see how much they can get away with.


I don't understand how this is ok, or fair.

I see your point.

However, in this situation, the only competition this fat ass is winning is a Twinkie eating contest.

posted on May, 6 2021 @ 12:06 PM
link
this is funny. i can care less about sports. But it will be ridiculous watching men dominate the women and crush records while everyone praises them for their courage...

posted on May, 6 2021 @ 12:15 PM
link
No wonder they switched teams, just total BS that they will likely take the spot of a real female athlete 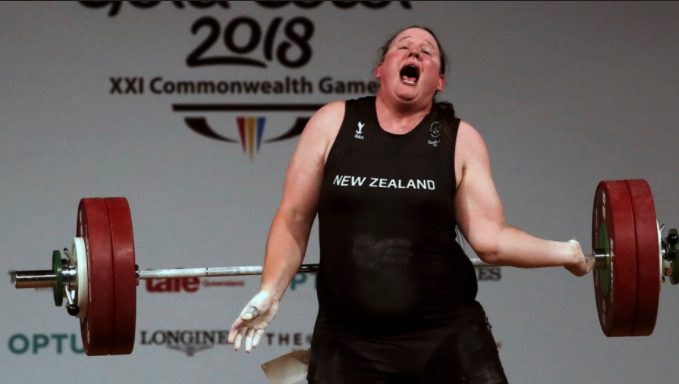 He’s got boobs and he didn’t even need implants.

Wait til Micheal Phelps puts some lipstick on and demolishes all the womens swimming records.

originally posted by: putnam6
No wonder they switched teams, just total BS that they will likely take the spot of a real female athlete

If I have to pretend that's a women then the anti gun crowd can pretend I don't own guns.

As a woman that has competed in official races this is appalling.

There are physical differences that are very hard to overcome as a women. One example would be neck strength. Now I see this man going into women sports I have zero respect for this move.

Zero accomplishment if he wins. I "just" won a 2nd podium but it felt like I accomplished something, because I went over my own restraints and limits to make it happen. I never used any excuses about being a women, the gender didn't matter to me, just one thing that I needed to catch up physically and technically and that was my goal all the way.

This was when we didn't have DSG or automatic transmissions in race cars. Manual driven with hand and foot. I am very sure that if there had been a womens class, I would have been in the top third just because of the physical training I needed to go through, the stamina aquired to endure a four hour long race.

This guy however is going the easy route, again I have zero respect from a fighter side of view.

posted on May, 6 2021 @ 12:36 PM
link
a reply to: Flyingclaydisk
Dear FCD, I'm all for men in womens teams. I want to be in the womens volleyball team, I can't play volleyball but I can have a great time in the showers afterwards.
On a serious not, the Olympic committee has an in place test for cross gender athletes. On only has to look at past Olympics with them banning Russian and Ukrainian women athletes for having too much male hormones.

"I wanna medal! I wanna medal !
And attention...from the media....
I wanna be famous, at any price....so bad, that I'll compete in women's sports"

Because, too #ty an "athlete" to compete as the man he is.

posted on May, 6 2021 @ 12:39 PM
link
I can't prove this, but you know there has to be some 'guys' for whom this is part of the reason why they even became trans. Maybe or maybe not a big part of the reason, but I'm sure there are some who may be considering 'making the change', but not fully committed to it. Then they factor in that they will almost instantly become a better athlete, and that's enough to conclusively convince them to go through with the operation(s)..... Which is bull#.

But yeah, I agree with others that the only logical conclusion is to have transgender sports leagues.


lol I know I shouldn't say this, but....
There is a Special Olympics, so why not a Transgender Olympics too?


To the people who are pro this madness: there will never be a women who transitioned to a man that will ever win a gold in any male tournament.


Conversely, males who transition to female will dominate the women's division.


The scales are unbalanced. Savvy?

....there will never be a women who transitioned to a man that will ever win a gold in any male tournament.

Conversely, males who transition to female will dominate the women's division.

I wouldn't go that far.

It all depends on the sport.

There are some sports that women are just better at than men.

And some that are equal.