During the casting for Terminator, Orion pictures wanted to pick an up and coming star for the role of Kyle Reese. Arnold Schwarzenegger was initially considered for the role (he was still relatively new to the acting world then). The problem with this was, if they had Schwarzenegger play Reese, they would need an even bigger star to play the Terminator, and this could have adverse budget implications. Consequently, they considered possibly using Sylvester Stallone as the Terminator, or possibly even Mel Gibson.

One other name was considered for the role of the Terminator, and this was O.J. Simpson. Director James Cameron stepped in and objected to O.J. Simpson because he felt O.J. wouldn't be..."believable"...as a killer!

Just 10 short years later, Simpson would be on trial for the murders of Nicole Simpson and Ron Goldman following the slowest and most publicized car chase in history.

We now return you to your regularly scheduled programming already in progress.

I remember that story.
Simpson did not have an intimidating look so it was the correct call.

Casting can make all the difference...
Like when Nicholas Cage was cast as superman....ugh

posted on May, 6 2021 @ 08:01 AM
link
So if Cameron had not objected and if O.J. had been chosen to play the part of the 'Killer', that would have set in motion a different timeline.

In one possible alternate timeline, O.J. may have failed at being a believable killer in the movie, which maybe could have led him to become a much less angry rage-filled man. And just maybe, Nicole and Ron would still be alive.


or vice versa, maybe he could have successfully pulled it off, and worked out all of his anger and rage on the screen, and wouldn't have had as much of it left over to use in the real world.

OR...Simpson could have wiped out half of Los Angeles!

OR...Simpson could have wiped out half of Los Angeles!

To compound the irony, there is an ep of Seinfeld where Elaine suggests her boyfriend change his name to O.J. because his current name was shared by a known killer.

It aired about a year before the white Bronco chase. 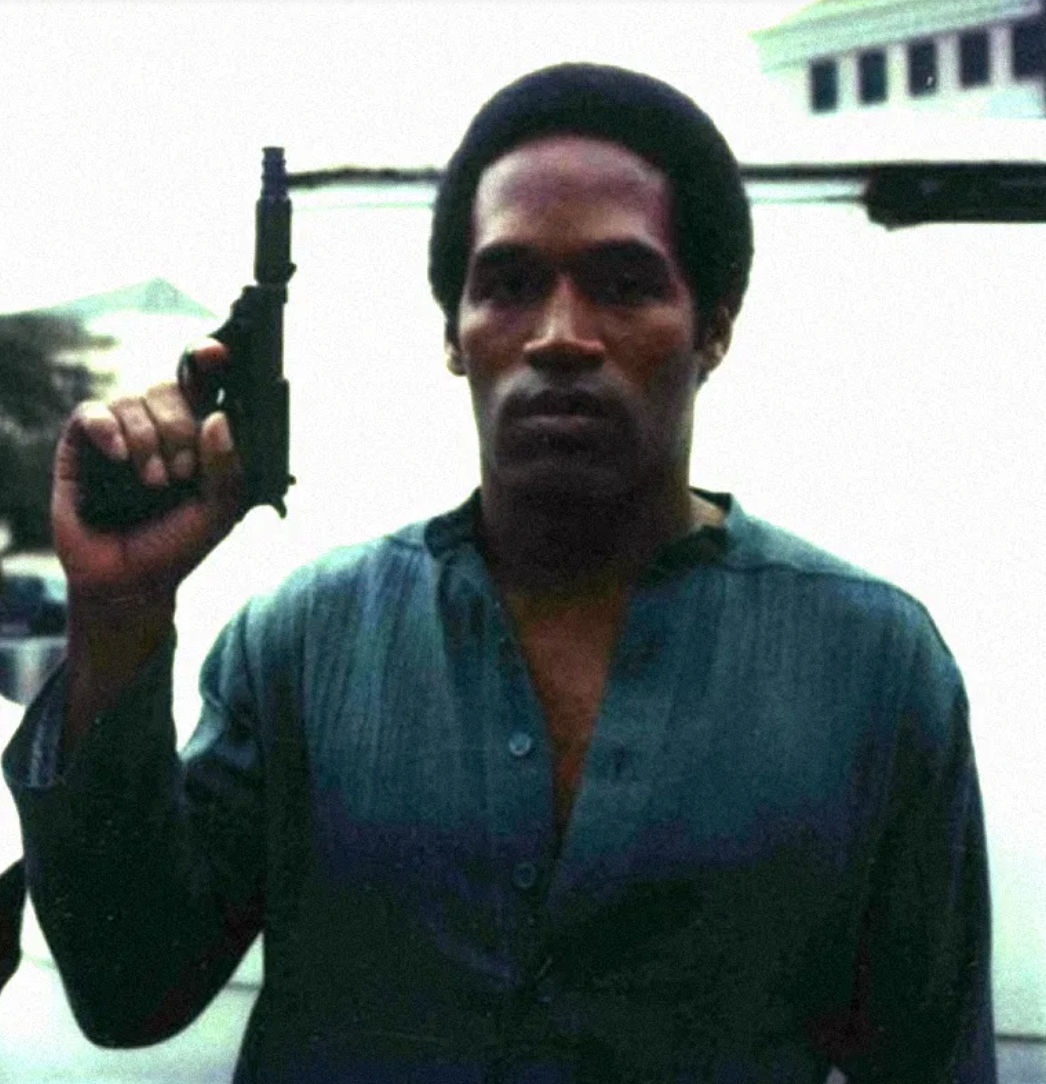 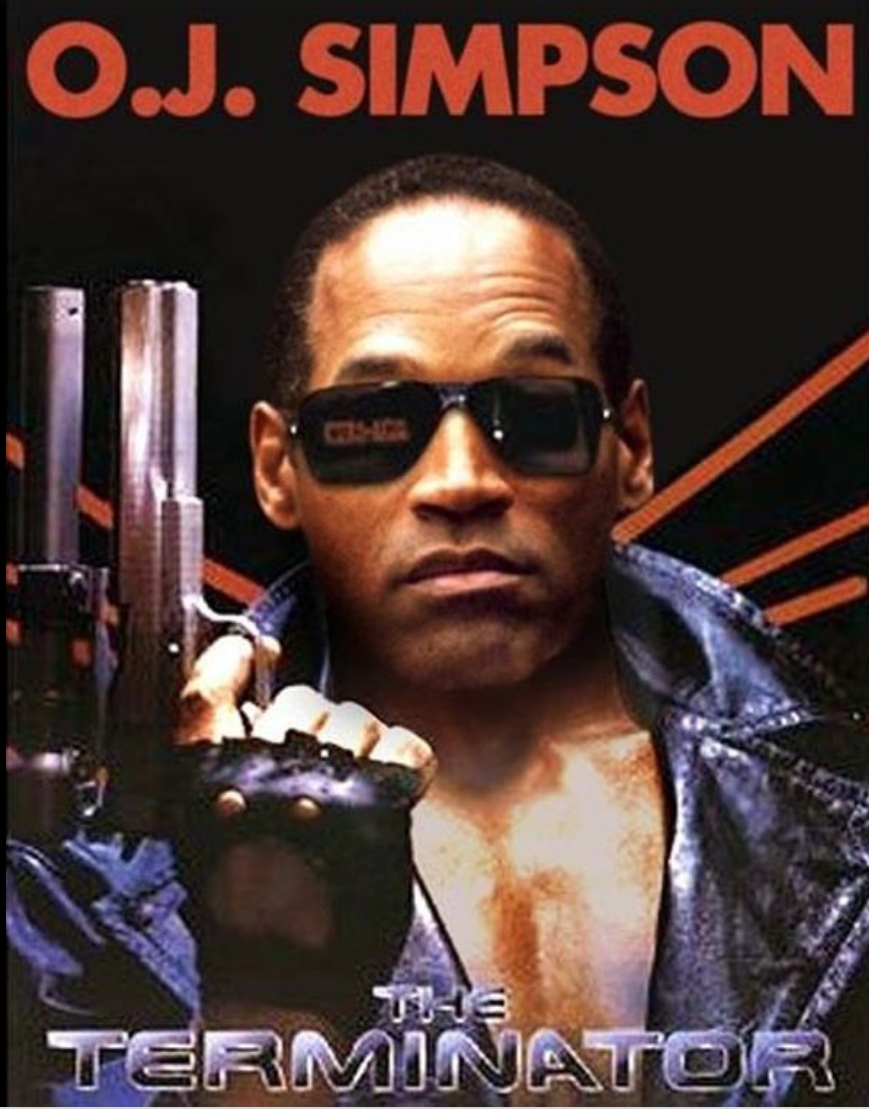 
To compound the irony, there is an ep of Seinfeld where Elaine suggests her boyfriend change his name to O.J. because his current name was shared by a known killer. 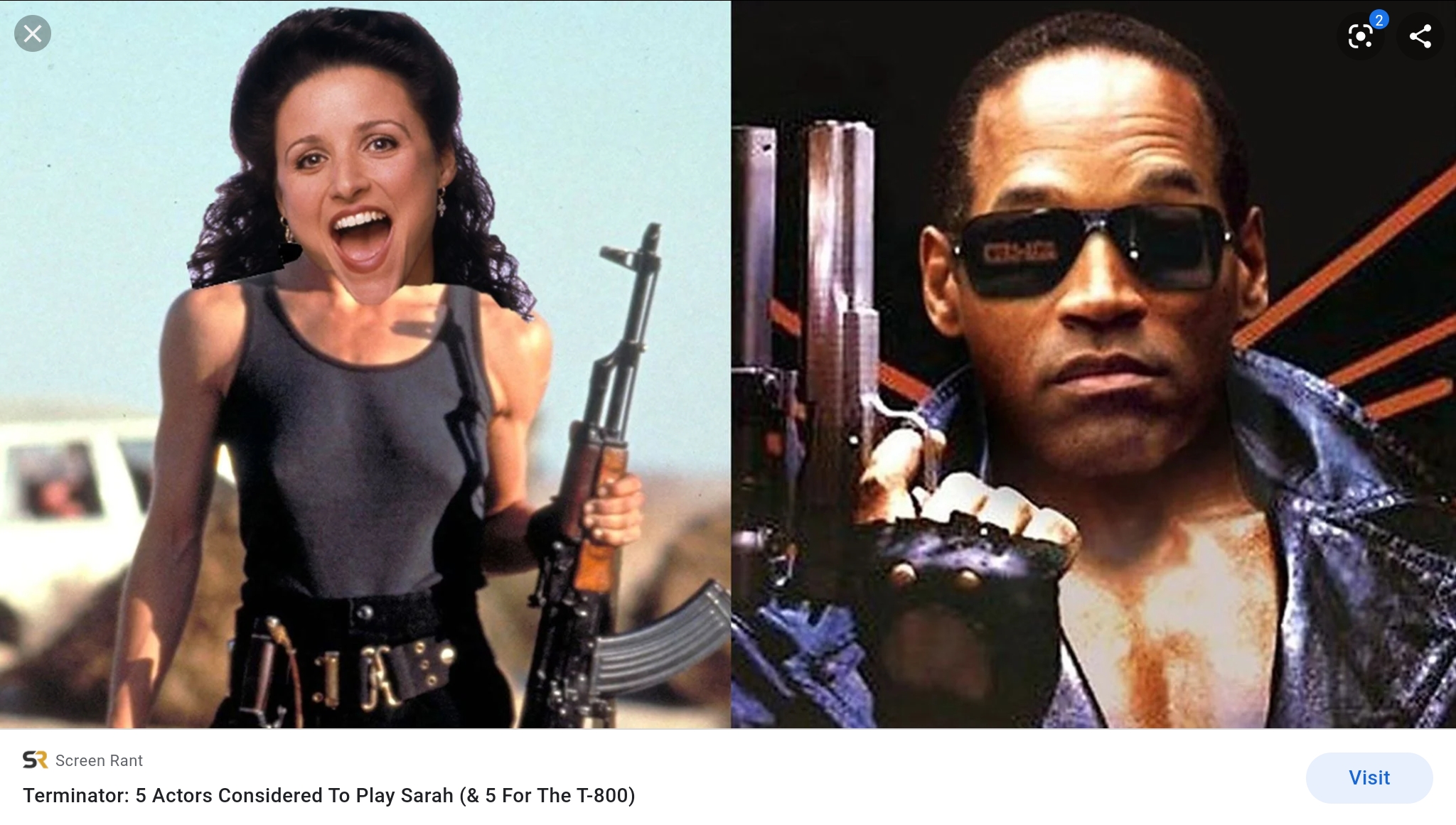 You know what scares me about both those pictures of o.j with a gun.

No eye on target. Aka that which you Intend to destroy.

No idea what is behind it.

Yet his finger is on the trigger in both pics.

For those who dont know the very simple rules of shooting saftey, those two pics may seem normal.

To anyone with a brain, or even a smidgen of gun saftey training he is breaking just about every rule in the book.


So ya....f ya! O.J scares me, but no more than any other idiot with access to firearms who exhibits a total lack of common sense or concern for saftey.

If I ever saw somone handle a weapon like that IRL I would run the other way as fast as possible.

Maybe not getting to Terminate people on TV led to some secret Terminator fantasy that he had to play out in real life instead. Maybe if they never offered him the role Nicole and Ron would be alive.

Or maybe he wouldn't have got off the hook for the murders because everyone would have the idea in their head that OJ is 'the terminator' and would have scrutinized the evidence more.

originally posted by: dug88
a reply to: BrokenCircles

Or maybe he wouldn't have got off the hook for the murders because everyone would have the idea in their head that OJ is 'the terminator' and would have scrutinized the evidence more.

If O.J. Simpson had gotten the roll as the Terminator. Then Kato Kaelin would have disrupted the timeline thus placing O.J. in a Traffic Jam on the 101 freeway thus leaving Nicole Brown Simpson and Ronald Goldman at the Birkenstock shoe festival in Arizona Bay pondering the question " If cheese was getting it's picture taken, what would it say"?

After all this, Queen Elizabeth was left to murder Enrico Palazzo at the Angels Baseball Game with a Corgi.