Well, the numbers are in on the most popular president ever, the 81 million votes president. He appears to have 11.6 million watchers compared with 48 million to 37.2 million for Trump.


A tweet from Jenna Ellis sums up the comparison... 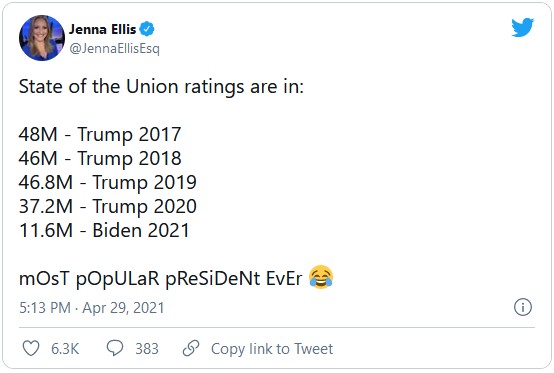 I'm sure there's a good reason. Maybe it was just a one-off? A fluke? I'm flabbergasted! Then again, maybe the senator has a point...


Senator Jim Risch (R-Idaho) said, “What the president did tonight was lay out a comprehensive vision for how to transition our society from capitalism to socialism...”


Whatever the case, it seems those "81 million voters" have lost interest. I wonder why?

ETA: According to Daily Wire, the number is almost twice that at 22.6 million. Have the numbers been padded or down-played?
edit on 4/29/2021 by Klassified because: eta

Why would Jenna Ellis play the numbers down ?
edit on 29-4-2021 by sunkuong because: because Jenna Ellis

At least he beat the viewing figures for the Oscars.

Did he do a long, tearful acceptance speech and thank about 300 people while tutting about climate racism?

Bumbling Biden’s excuse will be that all the blacks don’t know how to turn their TVs on.
81 million my ass.

I think much of the left aren't even really inspired and or thrilled by him. I doubt he was most of their first choice, I mean, we all know the DNC doesn't really care who most people want to have the candidacy.

Though, it should be noted many don't have cable anymore, because why would you. So I'm sure there's some online views aren't counted into many of the stats. That being said, my above point stands. No secret, people settled for Biden. I personally think he'll go down as either one of the worst in recent history, or the most mediocre. Either way, it's not a title to celebrate. Times couldn't be more trying and yet here we are. But as everyone knows here, I wasn't going to be happy with either. They don't even put an effort towards the theatrics anymore. They're toying with us at this point.


Why would Jenna Ellis play the numbers down ?


I don't know that she did or would, but I'm sure some would play them down to make Biden look even worse (if that's possible), while the media would pad them to make him look better. Take your pick.

originally posted by: CriticalStinker
I personally think he'll go down as either one of the worst in recent history, or the most mediocre.

It's like taking the Worst President, and the Most Meh President titles from Carter. He already took the Rambling Buffoon title from Bush. I honestly didn't think we'd get the Blue version of a verbal butterfingers, but we did.

They'll blame those interhack webnetters off the Russian interbot.
Those devious Russians probadefinitely wiped off at least a hundred and ninety million views.

The whole political thing is an ongoing reality TV show, perhaps the people have just got bored and changed channels. It's been going for a long time now and never really going anywhere.

Not to mention the like to dislike ratio on every single Biden speech video, on every channel that hosts it.

Yeah. Most votes in American history. Sure.

posted on Apr, 29 2021 @ 10:40 PM
link
Did any of you watch that disaster. Pelosi was ready to nod off and everytime they would focus on someone in the gallery they were nodding off.

Biden the most boring President ever.

originally posted by: MRinder
Did any of you watch that disaster. Pelosi was ready to nod off and everytime they would focus on someone in the gallery they were nodding off.

Biden the most boring President ever.


Nope.
I would rather gouge my eyes out than watch that complete fraud.

wheres his b-hive of supporters?

I'm pretty sure I'm on a list somewhere already.