Jeez, why don't you go take your feelings over to the rant section?

originally posted by: AutomateThis1
No not the "Libertarian" Party, but the LP Mises Caucus. 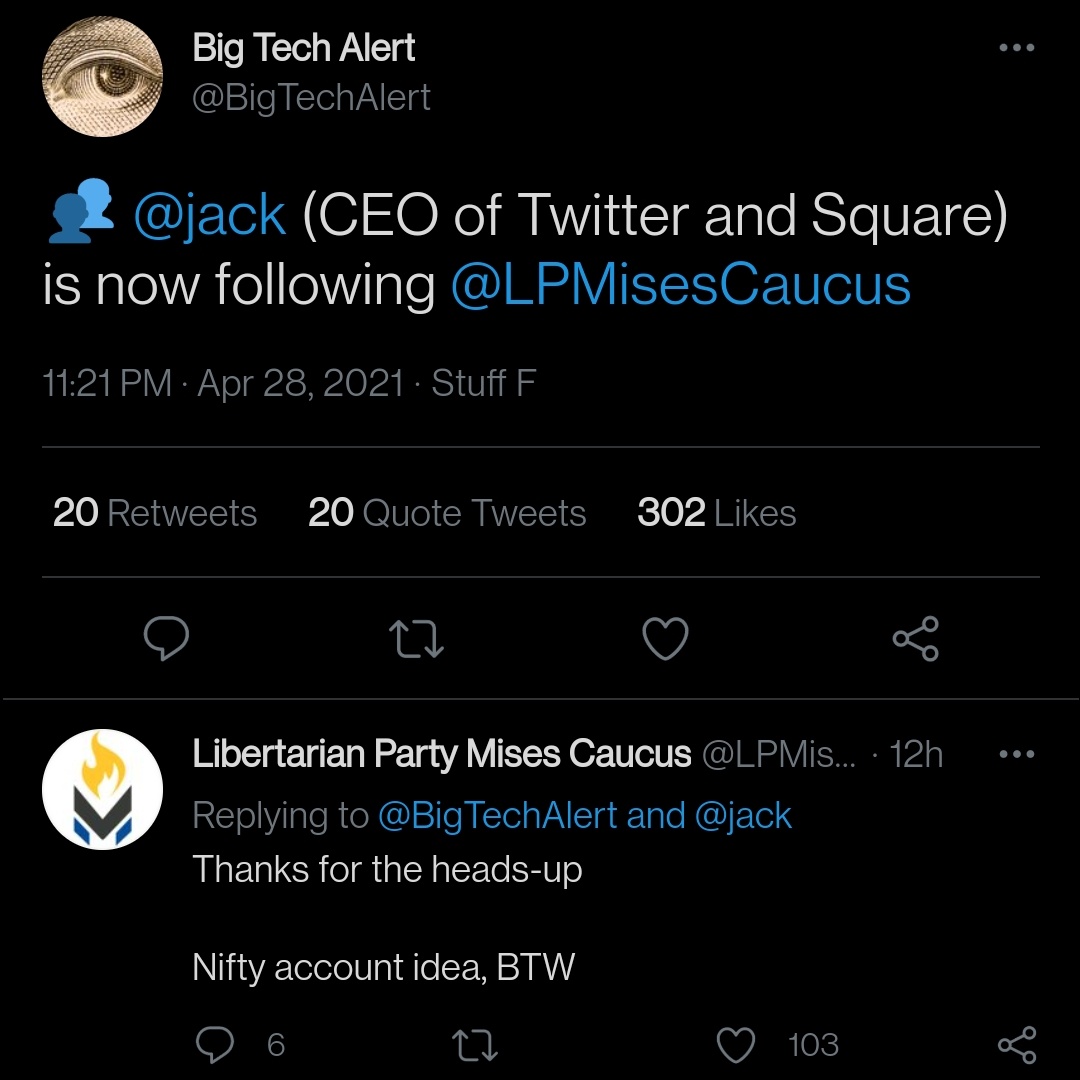 I don't like the guy, but it's pretty interesting that he's following the Mises Caucus, and not the main LP party.

The main party is a #show if you ask me, a bunch of pandering woke folks, who's only claim to integrity is that they aren't Democrats or Republicans, but if they ever made headway into national politics would just as quickly operate as politicians do.

But no, he goes and follows the Mises Caucus that consists of the hardline Libertarians who don't budge on issues. It'll be interesting to see if he decides to change his political leanings in the near future.

These damn woke liberal folk wanting love, peace and equality. Horse cr#p! I will need a stronger hex around my house to keep these crazy freedom loving nuts out.

Jeez, why don't you go take your feelings over to the rant section?

My comments are directed at Dorsey.

Why are you so butt-hurt about it ?

You're the one getting all emotional.

If you want to talk to Dorsey why don't you go troll his twitter page?

I'll be sure to spam your next thread with BS. Would that make you happy?

"Regardless, I don’t think @jack is at all happy with the cesspool Twitter has become, but I also think he fruitlessly tries to thread needles that are really, really tough to thread. I sincerely hope he’s coming around to our point of view on authoritarianism and the perils of getting into cahoots with the state."

The article starts with a quick rehash of what started the attention, and then gives a few brief examples of the initial reactions.

What does it mean? Is @jack coming around? Has he been a closet libertarian all along? Is this just the LPMC getting the “Rogan bump” from Dave Smith’s latest appearance? Or are we all on a list now?

Then the guy gives presents his stance on big tech organizations.

I am pretty firmly in the “I’m in danger” camp by default when it comes to oligarchy-adjacent corporations. I think these tech organizations are subsidiaries of the state, nothing like private companies. They’re no different from banks, insurance companies, and weapons manufacturers.

Then goes on to briefly explain his views on the Libertarian party and it's constituents.

Despite being a nominal (if not practical) agorist, I renewed my membership with the Libertarian Party last year. I renewed in large part because I think libertarians and Libertarians don’t understand the cathedral and the threat it poses, and I want to help change that. Given the LP is the de facto face and voice of libertarianism in America, it’s important to me that the general public not get a twisted message about what it is we believe. “They’re a private company and they can do what they want,” is an inaccurate assessment of the situation, and it’s a dangerous take when personal liberty is at stake.

Ideologically, libertarianism is an outgrowth of the Enlightenment. People drawn to libertarianism tend to be hardcore materialists with no time for incorporeal, mystical, unknown (and unknowable) realities. We can’t combat the cathedral with muh logical consistency.

Materialists using the term “The Cathedral” are actually in a worse position (misinformed) than people who have no clue what’s going on (uninformed).

Because you don’t understand the #ChurchOfWoke answers to celestial Powers and Principalities, you are powerless against it

Then, he offers a quick critique of the Libertarian Party.

The Libertarian Party and institutional libertarians (cough-REASON-cough) have not only been terrible on this issue, but they’ve bent over backwards to be seen by the manufacturers of culture as respectable and non-heretical.

Twitter is particularly awful because it’s the digital home of the cathedral.

At this point he some it up with

Having said that…
Really, this is probably nothing.

Second, @jack follows a lot of people. Scrolling through his follows, you see a pretty persistent thread: 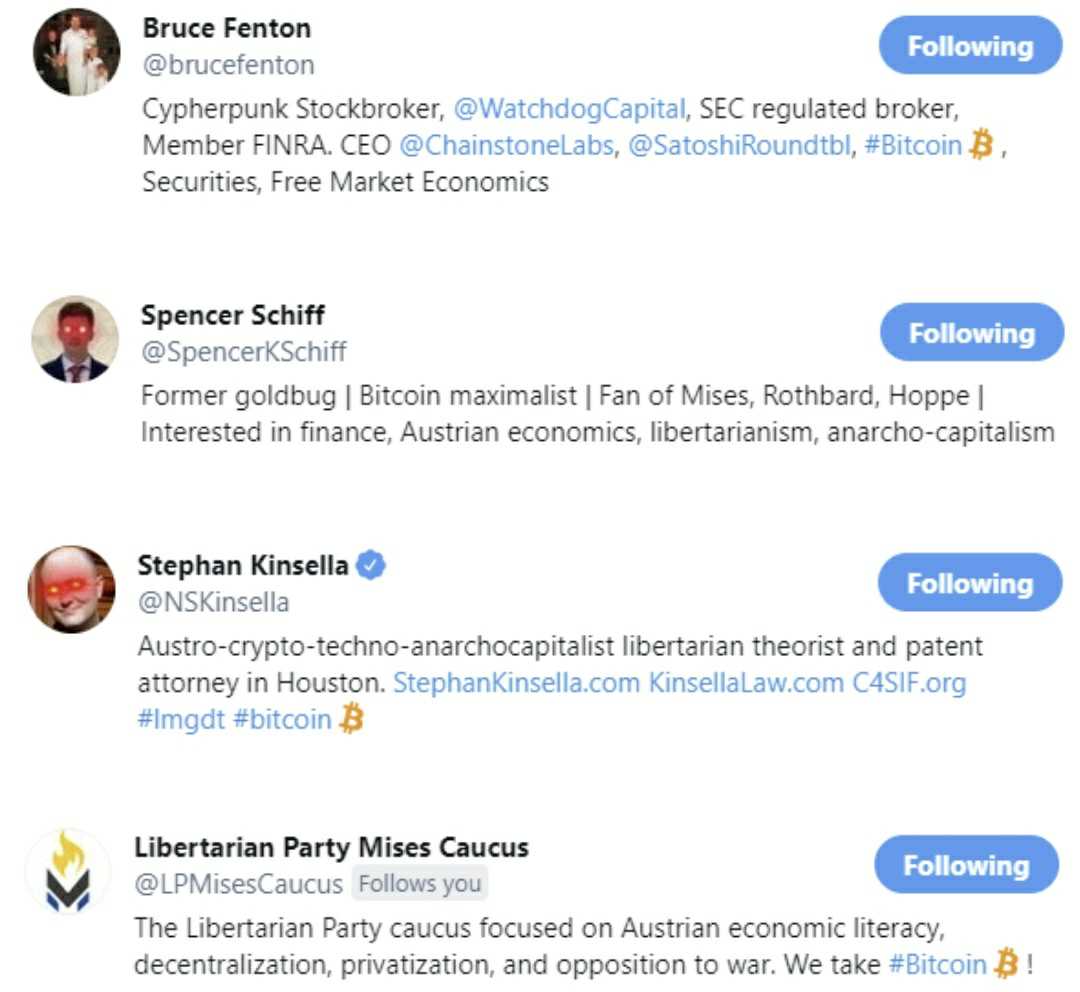 He’s super into Bitcoin. How many partisan political organizations are also super into Bitcoin? I’d wager a few sats it’s not many. Honestly, I’m more surprised to see Stephan Kinsella there than I am the LPMC. LPMC probably just fits his niche.

So, probably, it’s nothing. But maybe…it’s something good?

Scrolling through @jack’s following tab, I noticed a few other interesting names I didn’t expect to see. For instance, he follows one of the greatest opponents of the cathedral from the left, Caitlin Johnstone. Caitlin Johnstone’s media criticism is second to none, including every libertarian media critic I know of. And her foreign policy analysis rivals anyone you’ll hear on the Scott Horton Show.

@jack also follows former-mainstream-now-disgraced journalists Alex Berenson and Bari Weiss. Alex has been fantastic at challenging establishment narrative on the pandemic. (He’s also spoken heretically about marijuana, which I know rankles some libertarians.) Bari has been a great voice in opposition to cancel culture and woke authoritarianism. (She’s also very thin-skinned when it comes to Israel and perceptions of anti-Semitism, which I know rankles some libertarians.)

@jack follows ZeroHedge, a news organization that’s been censored across social media for its non-approved messaging and often-true conspiracy theorizing. (Of course, Twitter throws up a warning when you click on the link to ZeroHedge in their profile. You can’t win them all, I suppose.)

Is @jack getting tired of the game?

It seems like @jack is getting pretty fed up with being hauled before Congress. In those mind numbing hearings, he’s flippant and defiant, unlike his Facebook counterpart Mark Zuckerberg. Also unlike Zuck, @jack wasn’t inserted into the cathedral as a child. Zuck is what Monica Perez calls a “created person”. He was groomed from an early age to manufacture the culture.

On the other hand, @jack had more-or-less working class parents, went to a normal school, a state university, transferred to NYU and then dropped out. There’s no Johns Hopkins summer camps, Ivy League feeder boarding schools, or education from the masters of the universe at Harvard in @jack’s closet. It’s possible he’s realizing what a Faustian bargain it was to get in bed with the state in the first place.

@jack follows many members of the free speech loving, Enlightenment-minded members of the Intellectual Dark Web. Obviously, the fact that he follows Jordan Peterson and Sam Harris and Eric Weinstein isn’t evidence that he endorses them. He also follows Ilhan Omar and Elizabeth Warren. But I think he clearly was experiencing cognitive dissonance when IDW-adjacent journalist Tim Pool confronted him on IDW-adjacent podcaster Joe Rogan’s show. It’s certainly possible the criticism he’s been getting since Twitter went woke has caused him to put some thought into his worldview.

Despite his wokeness, @jack’s north star has always been open and thoughtful dialogue. The Twitter developers are constantly tinkering (or refusing to tinker) with the platform in the hopes of leading it in that direction. It could be that Project BlueSky, Twitter’s decentralized blockchain-based social platform is the answer to all our problems.

As we’ve been saying for a while, we are rethinking everything about the service to ensure we are incentivizing healthy conversation, that includes the like button. We are in the early stages of the work and have no plans to share right now. t.co...

Regardless, I don’t think @jack is at all happy with the cesspool Twitter has become, but I also think he fruitlessly tries to thread needles that are really, really tough to thread. I sincerely hope he’s coming around to our point of view on authoritarianism and the perils of getting into cahoots with the state.

Now, a lot of this is information that's readily available for anyone who wants to make the time to search for it.

I'm not okay with Twitter shutting down politicians, celebrities, and other public figures, but all one needs to do is check out the commentary to see that it can turn into a peanut gallery, and most people can get away with saying whatever they want as long as they refrain from using obvious slurs or inciteful language.

Do people get away with it? Most definitely. It's irksome when politicians and celebrities get away with it, especially when the Twitter bias leans one way, and shuts down the other political leaning.

Like I said from the start though it does seem based upon Jacks follows that he is seeking out people who are considered knowledgeable about crypto.

Is it just coincidence that many of them tend to be Libertarian/AnCAp?