posted on Apr, 28 2021 @ 11:31 PM
link
China has been working on their manned program in a slow, but steady way. They have flown two smaller space stations intended to be learning exercises for their future endeavors. They have flown their own capsule, which does appear to be with some Russian or Soviet design elements. However, their next gen capsule, intended for both LEO and cislunar operations is well underway and will be purely of Chinese design.

The next step in their program is the launch and construction of Tianhe[1], a multi module space station intended for expansion and long term occupation. It is planned to be used like the ISS, but will be a Chinese driven program rather than a multinational one like the ISS was. Note: the Gateway station being worked on now by the US will have international participation, but will be a US led program. The ISS was program where the US, Russia, ESA, Japan, Canada, etc were all relatively equal partners. That's a reason Russia has dropped out of the Gateway station program and why, probably, Russia is not contributing a module to the Chinese station.

The space station is currently advertised as having 3 modules (some sources suggest 4). It can grow easily as the whole thing is very modular. The expected lifetime is to be 10 years. Think Mir rather than ISS in tech generations. That said, it's not really as primitive as Mir. The Chinese have offered the world to send astronauts (taikonauts?) to the station. The Europeans are in talks to do so last I heard and the Russians may as well. However, there's no word if the Soyuz would be able to dock or not. The US is forbidden by law to cooperate with China on space activities.

I hope this isn't the kind of activity they have in mind up there.
edit on 29-4-2021 by TrulyColorBlind because: Added an afterthought.

I think in the political and military climate of today, we would be naive to think that the weaponisation of space isn't high on the agenda list for most space faring nations.

Looks like everything didn't go as planned . Check this out:
spacenews.com...

However this core stage is now also in orbit and is likely to make an uncontrolled reentry over the next days or week as growing interaction with the atmosphere drags it to Earth. If so, it will be one of the largest instances of uncontrolled reentry of a spacecraft and could potentially land on an inhabited area.


The high speed of the rocket body means it orbits the Earth roughly every 90 minutes and so a change of just a few minutes in reentry time results in reentry point thousands of kilometers away.

The Long March 5B core stage’s orbital inclination of 41.5 degrees means the rocket body passes a little farther north than New York, Madrid and Beijing and as far south as southern Chile and Wellington, New Zealand, and could make its reentry at any point within this area.

Many Many years ago in 1990 I was living in Arkansas and I went out to my VW van late at night and in the sky there was a huge flame going across the night sky towards the east. I though maybe it was an airliner on fire and was going to crash! the next day on the news they said it was a chinese satellite that entered the atmosphere and if I remember correctly it landed in Georgia. 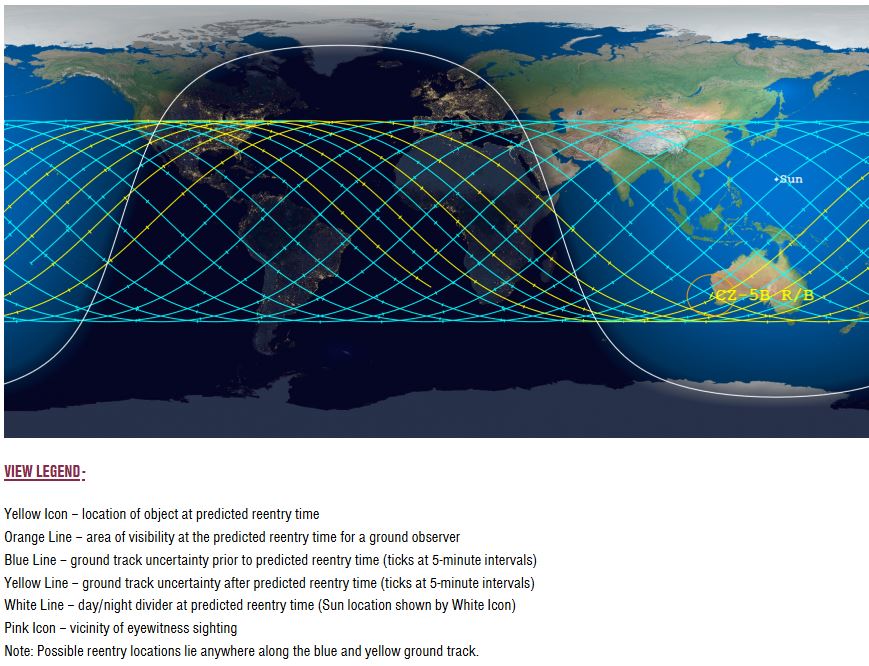 If you live under those yellow lines a hardhat might be in order.

posted on May, 5 2021 @ 06:22 PM
link
Unfortunately, this is entirely as planned for the Long March 5B. As designed this rocket's core stage takes the payload into orbit and enters a (short-lived) orbit itself. While China is rather secretive about these sorts of things, it appears that this model of rocket isn't capable of controlling its re-entry. A May 2020 launch of the Long March 5B dropped debris on a village in the Ivory Coast.

What's worse is there are at least 3 more launches of the 5B (2 more space station modules and 1 space telescope) scheduled for the next couple of years.

The first cargo module has docked with the space station core.