They don't give a lot of info on the process and their site is mostly PR bull# but essentially, it's salmon protein grown in a lab through cultured salmon cells. 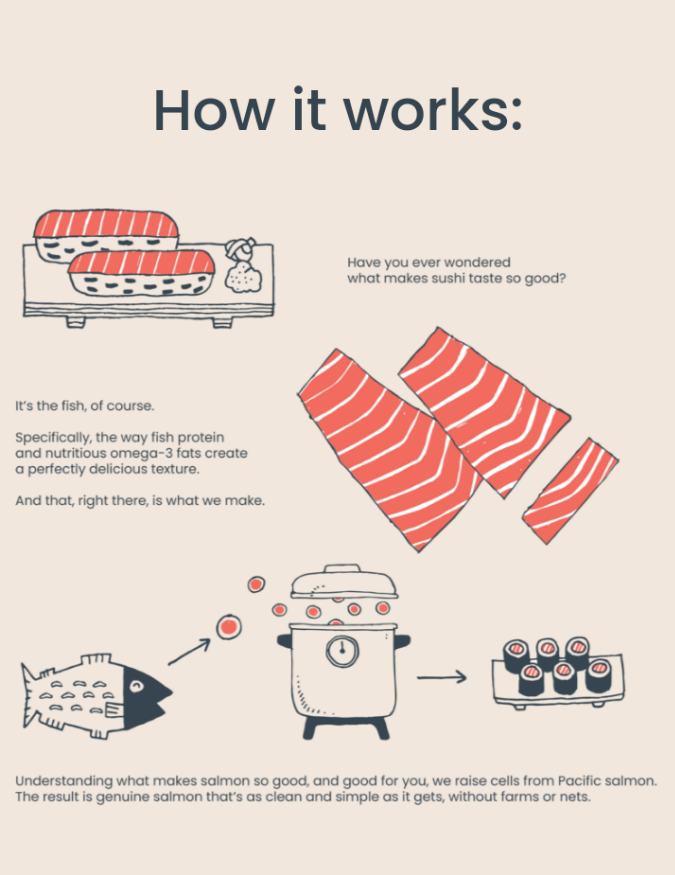 This is a pivotal moment for the future of food. Demand for seafood and other animal protein has never been greater, while wild sources continue to dwindle. At the same time, our global population is on track to reach nearly 10 billion by the middle of this century. With so much new demand on our food supply, we need to create new tools to sustainably meet the food security challenges of our 21st century. This is the promise of cellular agriculture.

By growing seafood directly from cells, we now have the ability to cultivate genuine salmon and other seafood without relying on wild or farmed fish. What’s more, we have the opportunity to keep what we all love about seafood on our plates – the delicious protein and nutritious fats – without the things we’d rather leave out: mercury, microplastics, pharmaceutical compounds, and other contaminants.

Together we can return our planet back to the wild, restoring our rivers, streams, and oceans so they can once again be abundant sources of wild fish for generations to come

On one hand, i really do appreciate the need to find a more sustainable method of food production, especially when it comes to sea food and to be honest, the idea of eating lab grown 'meat' in theory really isn't much worse than most of the processed garbage food out there.

But, there haven't been any studies on the long term effects of eating protein like that, we're creating protein we believe is pretty much close enough to nature, but protein's weird, sometimes you end up with misfolded proteins called prions. Prions are responsible for such things as Bovine spongiform encephalopathy(mad cow disease) and we don't actually have a lot of knowledge about how they form, why they can be so damaging to humans or much knowlege in general about them.

Genetic engineering technology is still in a fairly early stage. Much of it is just some rough, lets cut here, blast some tissue there and see what happens.

Less extreme, the general nutritional effects of eating cultured food. In the end, how do we know it's actually equivalent to eating animal meat? All the nutrients and 'things' in meat comes from the things the animal takes into its body throughout its life, in lab cultured meat, I'm assuming any nutrients would be absent or artificially replaced. How to we really know that's good enough?

I dunno, honestly, i am open to the idea, but i don't like the way it's being pushed out and sold without much in the way of studies or regulation.

Where would we be if Grog decided he couldn't start an agrarian life style with out first studying its long term effects.

Where would we be if James Watt decided he couldn't design a better steam engine until he studied the long term effects of an industrial life?

Where would we be if teen age kids thaught it would be better to not build a personal computer until they understand the long term effects of computers on society?

When did we become so puritanical in our progress towards the future?

Probably because of all those times we were wrong and did dumb # like eat arsenic, use lead in everything, consume epic amounts of trans fats, thalidomide babies, radium paint to name a few.

It's called learning from past mistakes. Something people are clearly doing.
edit on 22/4/2021 by dug88 because: (no reason given)

Ya know you can leave a tub of margarine open outside and not even rats'll eat it?

posted on Apr, 22 2021 @ 01:57 PM
link
Not a lot of reason to worry about it but the FDA is interested and should be involved since it is food. This is from 2019, I can't find anything more recent. I wonder if these fish guys have some sort of approval or if they're sliding under the radar.

FSIS and FDA released a formal agreement to address the regulatory oversight of human food produced using this new technology. The formal agreement describes the oversight roles and responsibilities for both agencies and how the agencies will collaborate to regulate the development and entry of these products into commerce. This shared regulatory approach will ensure that cell-cultured products derived from the cell lines of livestock and poultry are produced safely and are accurately labeled.

originally posted by: dug88
Ya know you can leave a tub of margarine open outside and not even rats'll eat it?

Not even DB will eat margarine.

Just curious why they are calling this 'sushi grade' since there is no such thing.

posted on Apr, 22 2021 @ 02:23 PM
link
Im gonna be honest: my only issue with farm raised fish in general is flavor. They feed it cheap garbage that makes it taste like cheap garbage. Catfish is the worst of all....but salmon absolutely is part of that.

As far as growing your own....im in no way averse to that. When the rumor was that the freakishly big and tender breasts at KFC were lab grown bodyless breasts, i was happy to eat another.

The only thing that matters is nutrients. If the nutrients are there and the disease isn't....great. Serve me up one.

originally posted by: dug88
a reply to: dandandat2

Probably because of all those times we were wrong and did dumb # like eat arsenic, use lead in everything, consume epic amounts of trans fats, thalidomide babies, radium paint to name a few.

It's called learning from past mistakes. Something people are clearly doing.

All those bad things occurred and yet the human population still continues to grow exponentially and quality of life has risen. What exactly do we need to learn from those past mistakes?

Because to me the lesson seems to be that your going to make mistakes when you try new things; but keep trying; and keep making mistakes; eventually life will get better.

Paralysis by analysis is not a virtue.

posted on Apr, 22 2021 @ 02:53 PM
link
Cool potentially, although I wouldn't order it yet deliberately, before checking out more expert debate and documentaries, for example. But I won't knee-jerk say I'd never eat it either.

However, if we're talking rhino horn, for example, the fact that the same ingredients can be made otherwise (keratin essentially), or even that there could be a sustainable market, hasn't really changed much concerning policies or the black market's route to extinction for rhinos.

I mean is this actually going to safeguard wild salmon (in which case, I'd hope they're doing it for bluefin tuna first), or is it simply going to raise demand?

Of course it's also going to compete against other industries of farmed or possibly even sustainable salmon economies, which could leave indigenous fishing communities in Scandinavia, for example, impoverished.

There would have to be very clear and reliable distinctions between the various salmon products, and even now you're never really sure what species you're getting in all seafood restaurants.


Im gonna be honest: my only issue with farm raised fish in general is flavor. They feed it cheap garbage that makes it taste like cheap garbage. Catfish is the worst of all....but salmon absolutely is part of that.

I have a super high above average sense of smell, which means I also taste everything much more.
Farm raised salmon is about the nastiest hunk of flesh known to man. I would rather eat spam any day of the week over it. Catfish is gross in the wild, farm raised is worse.
Don’t even get me started on Shrimp.....gag gag gag..

still continues to grow exponentially and quality of life has risen

Coincidentally, along with our rise of safety standards and, hold on, maybe we should double check of this is actually a good idea.

posted on Apr, 22 2021 @ 04:02 PM
link
One would think the Norwegian salmon industry would get on board, considering that the popularity of Atlantic Salmon in sushi (although not quite introducing it) is often alleged to have been massively boosted as a result of a Norwegian marketing campaign in Japan in the 1980's.
www.npr.org...

Pacific salmon has been more suspect as a raw dish due to more parasites, so my first suspicion would be that this is simply a campaign to market pacific salmon as safe for sushi and other raw consumption.
It would be up to that industry to secure consumer trust in the product.

yeah, i have the heightened sense of taste (lots of taste buds) but not so much smell. My son does though.

originally posted by: dug88
a reply to: dandandat2

still continues to grow exponentially and quality of life has risen

Coincidentally, along with our rise of safety standards and, hold on, maybe we should double check of this is actually a good idea.

Planing for reasonable safety should be part of any new design. Safety third (not first) is a good policy.

Agonizing over the long term effects of everything that comes along is causing us to stagnant as a society.

We use to build out infrastructure in years and now that same effort takes a decade or more.

The moon mission took 9 years to get us from a dream to a man standing on the moon. Now we wouldn't be able to develop a moon mission budget in 9 years.

Having fun and looking cool always comes first, but, i don't wanna end up as the entry in a future textbook article on how retarded the past was.

posted on Apr, 23 2021 @ 05:36 AM
link
Why are people so focused on forcing their gross, Frankenfood on us? There is no way this stuff is as good for you as the real thing.