AOC Super-Wisdom and Logic -- Thoughts from a Marxist Dream

Yes, this time it's a double wisdom proclamation set.

1. A Supreme Court with 9 Justices should not be allowed to over turn laws passed by Congress.

2. Her implications indicate a Supreme Court with 13 Justices should be.

Well let's get some Harvard skillset Professors to confirm we don't need Checks and Balances and/or Separation of Powers, and then justify why we would even need courts if they can't overturn unconstitutional legislation in the first place.

Can any Democrat Scholars explain this Masterpiece ? 🤩

Rep. Alexandria Ocasio-Cortez (D-NY) has backed Democrats’ effort to pack the Supreme Court by adding four new seats that would be filled by President Joe Biden, arguing the courts should not be allowed to overturn laws passed by Congress.

“I do think we should be expanding the court,” she told reporters.

“The idea that nine people, that a nine-person court, can overturn laws that … hundreds and thousands of legislators, advocacy and policymakers drew consensus on … we have to … just ask ourselves, I think as a country, how much does that current structure benefit us? And I don’t think it does,” she said. 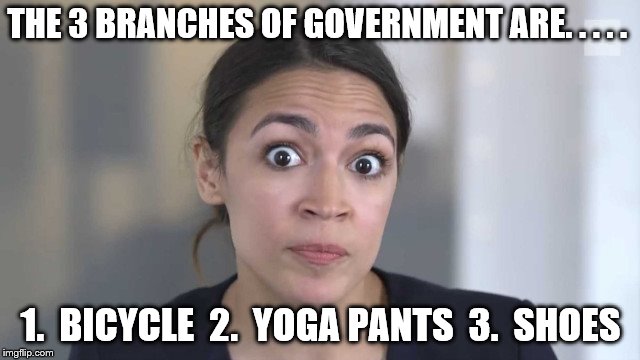 An oxymoron if ever I heard one.

“The idea that nine people, that a nine-person court, can overturn laws that … hundreds and thousands of legislators, advocacy and policymakers drew consensus on

Oh wow now that woman is a special kind of stupid , She is one of those unfortunate people whom are as dumb as they think they are smart.

Her liberal education has blinded her to any and all common since , That is one of downsides to an education you forget to think for yourself and get lost in the thinking of others . She constantly shows her ignorance of the American system of Governance and never gets called out for it , In fact she is praised for it which only compounds her ignorance.

One day this country will be governed by nothing but AOC's , I fear this I fear it greatly.

I thought nine was good.

This country is having a fire-sale on legitimacy....

originally posted by: Gothmog
No , the number of judges should be 42 .

Until the next president when it becomes 46

Does she even know how it works?

I think it would be a good idea for anyone running for public office to be required to take a test containing constitutional questions.

If they get one question wrong they should be deported to a country of their choice that practices their constitution in a way that reflects the incorrect answer.

Wasn’t that why she was a bar tender? So she could go to school and learn stuff?

Or do I have it all mixed up and she went to bar tending school?

originally posted by: glen200376
I bet she was even useless as a barmaid.

That’s why she went into politics.

Our only redeemable quality is that barely any of us know who AOC is.

AOC is an actress that is truly the 1st verifiable puppet in congress. She auditioned for the role for Christ's sake!

originally posted by: seeker1963
a reply to: asabuvsobelow

AOC is an actress that is truly the 1st verifiable puppet in congress. She auditioned for the role for Christ's sake!

Wonder how many times she’s been to Omega House to make, ahem, a stiff drink...

originally posted by: Gothmog
No , the number of judges should be 42 .

I think it should be 100. One for every state, and then one to potentially counterbalance the first one. Eh, who am I kidding. It should be like 500.

I know she is dumb but god this is ridiculous, still what can you expect from an ex bartender turned politician. More to the list of derailed, senile and giggling crazies that now we have governing our nation and trying to change the nations laws.

Can I say free drinks for all,


2. Her implications indicate a Supreme Court with 13 Justices should be.


Thirteen? Not nine? I think she is going back to the old ways. She read on the internet somewhere that the group should always be thirteen. I think she is trying to be a pretend witch.

We shall now see if she weighs the same as a duck.


I remember buying a drink from her. I asked for a Whiskey Strait, she said that she doesn't know is the Whiskey was Homosexual or Heterosexual but would ask. Afterwards I wondered if she was really a blond that dyes her hair. I asked myself if the Curtains matched the carpet, but after seeing that one video I guess she goes for wooden floors?

It's fun to pick on her, but really have we figured out whom she works for, or takes orders from? I bet she is a stooge of Socialist Alternative but I don't have any hard facts on this. She can't be a Soros stooge, but that doesn't mean that she isn't on his take. So whom is her boss?

Every US citizen should behold the judicial vote. We can all be judges good beautiful bad and ugly. With internet, it should be easy to blockchain our rulings.