I do wish that there were just a tad bit of self awareness so that when folks are called out on utter tripe, that it had some sort of effect.

Alas, im sure you were called a racist under bated breath.

1.The method of testing using PCR testing is unreliable. As per the inventor and the cdc.
2.The claimed symptoms are the flu symptoms
3.The flu dissapeared during the pandemic.
4.The extremely deadly virus doesn't shop at Walmart, it prefers small businesses.

Why are we even talking to this little rat?

posted on Apr, 15 2021 @ 08:09 PM
link
What concerns me with the public in amerIca at the moment, and this statement seems to be risky. Regardless if this congressman makes sense and asks this doctor very important questions that all AMERICANS, should be concerned about, we have two sectors of people instead of focusing on the answers to the questions being asked, decide to argue with one another about who has the right belief.

I certainly hope these people realize they are being manipulated, and look quite stupid. When is the end of the line? What do we have to see to determine “SAFE”, what is the end goal? Why are so many people accepting what they are being told without thinking for themselves?

We need these answers, we should all be demanding them, not arguing over beliefs, it’s stupid, as a matter a fact, because so many people are arguing with one another we don’t have these answers, instead we are being told to hush by those in power, and for whatever dumb reason people are getting mad at each other over beliefs instead of being mad at those telling us to hush and be quit.

originally posted by: JinMI
a reply to: Lumenari

I do wish that there were just a tad bit of self awareness so that when folks are called out on utter tripe, that it had some sort of effect.

Alas, im sure you were called a racist under bated breath.

If they had a tad bit of self awareness they would not currently be a Progressive Liberal in America.

originally posted by: Mandroid7
Let's stick to some facts...

1.The method of testing using PCR testing is unreliable. As per the inventor and the cdc.
2.The claimed symptoms are the flu symptoms
3.The flu dissapeared during the pandemic.
4.The extremely deadly virus doesn't shop at Walmart, it prefers small businesses.

Why are we even talking to this little rat?

It isn't about the virus at all.

Just a method of control.... and not even a new one. 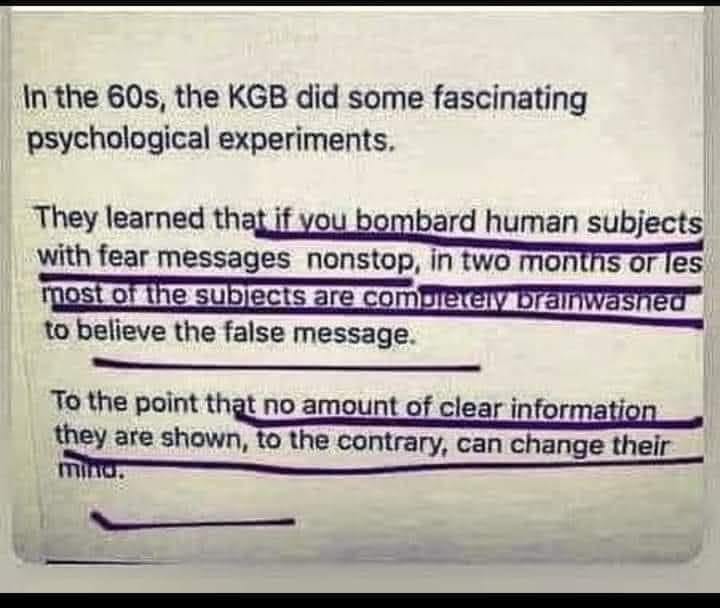 
originally posted by: underwerks
Imagine spending your life dedicated to science, working through multiple administrations and having to explain to a grandstanding mouth breather like Gym Jordan why you’re pushing common sense solutions to keep Americans safe.

This man must have the patience of a saint. And by the way, recommending you wear a mask in public isn’t infringing on your rights. Right wingers want to play the victim so much they’re willfully confusing an inconvenience with oppression. Which just illustrates that they have no idea what actual oppression is.


Wow you must love the taste of shoe polish because that’s a lot of boot licking in one statement.

Quoted once again for a Godlike level of projection.

You never fail to amuse...

Although it would be nice to not find out about your sexual quirks every time you get triggered on here.

He's a spanker after a tall glass of soy milk.

On topic, Jim J sure did destroy Faux-ci in that video. Faux-ci is so fake and a deceiver.

One need only look at Fauci's documented past and then look at the things he has said (again, documented) over the last year to realize that he is nothing but a tool for the establishment.

He is helping out with the meme I posted above you.

He has no credibility at all for anyone with a brain, an internet connection and a little time to research him.

Just another shepherd for the sheep....

And yes, I got a good giggle out of Jordan poking big holes in his credibility.

More people should do that.

posted on Apr, 15 2021 @ 11:32 PM
link
That video is embarrassing to watch. Seriously. Sounds like the friggin Morton Downey Jr show

Imagine spending your life dedicated to science and the best answer you can muster is, "When infection levels are low enough"? Jordan asked the question a dozen different ways and that's all he had. That's some real hard data there! It's almost like "science" has been jettisoned in favor of "feels". Like there's an agenda or something.

"Right wingers", knew exactly what I needed to know about you by that statement alone. I'm guessing you're one of those people who rally behind Twitter as they throw out news that does not fit the narrative? Like how masks don't work (Stanford)?

Keep denying science and listen to BS spouted by someone with money in the Covid game. Remember, the more covid scare mongering the more this idiot makes!

P.S.
Wearing a mask in public is more akin to actual oppression than anything you or BLM claims to have ever experienced.

originally posted by: seeker1963
a reply to: RazorV66
Since when does our freedom get held hostage to being forced to have an untested, unapproved by the FDA chemical injected into their body?

Ummm... it isn't solely about something being untested or unapproved...

Since when did people start accepting the ridiculous notion that anyone - anyone - should be able to force anyone else to inject something into their body? Anytime? Ever. For any reason???