Minneapolis erupted in looting and riots late Sunday after an officer fatally shot a man during a traffic stop just 10 miles from where Derek Chauvin had George Floyd pinned to the pavement last May.

The Minnesota National Guard was activated to quell what devolved into violent demonstrations over the fatal officer-involved shooting of 20-year-old Daunte Wright earlier Sunday in the city of Brooklyn Center, located in Hennepin County, on the border of Minneapolis.

A citywide curfew was issued by Brooklyn Center Mayor Mike Elliott until 6 a.m. CT Monday. About 500 people had gathered overnight outside of a police precinct in the city and clashed with officers.

Suspected gang member shot and killed by police, bLM erupts into riots and wants to fight the police. We all know the cops don't go around shooting black dudes for the hell of it, and we all know bLM only gathers to destroy things and steal what they can't afford so none of this comes as a surprise. And, what a coincidence, it happened on the heels of Derek Chauvin's trial coming closer to an end.

I was surprised to see this hadn't been posted yet, but in case I missed it, my apologies.


ETA: Pictures of the peaceful protests 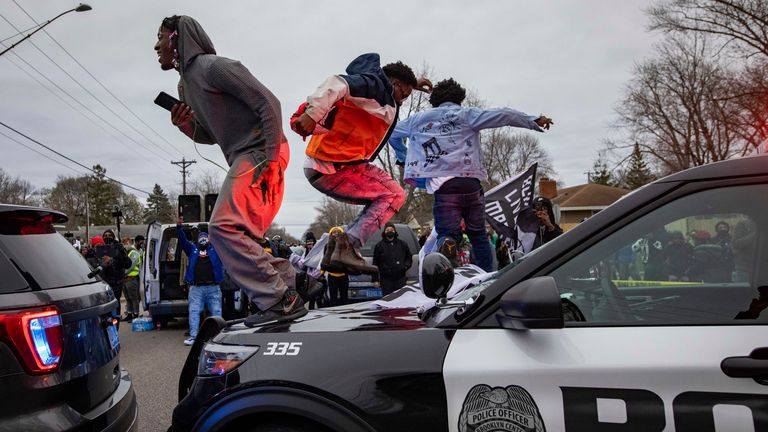 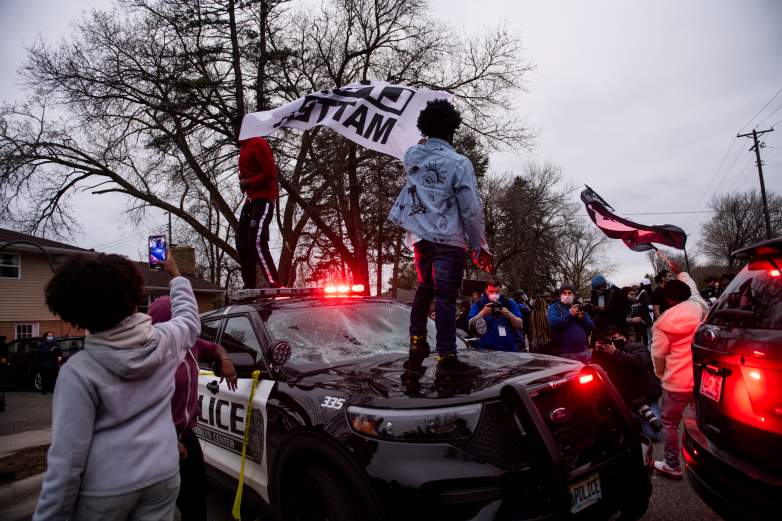 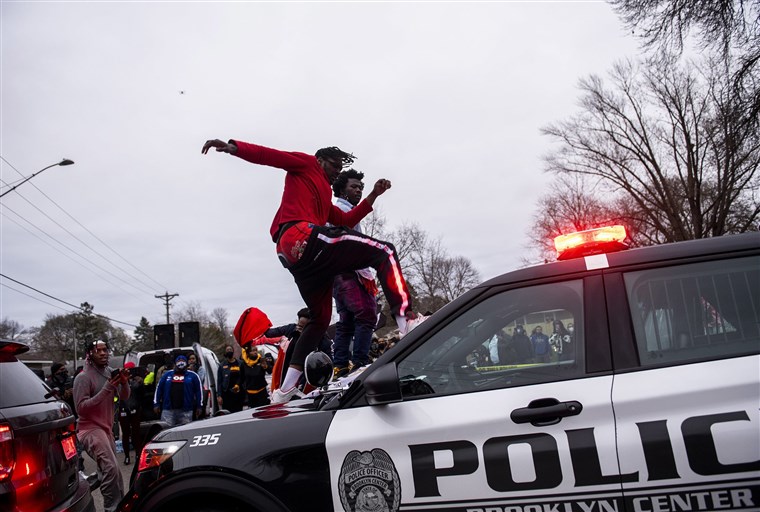 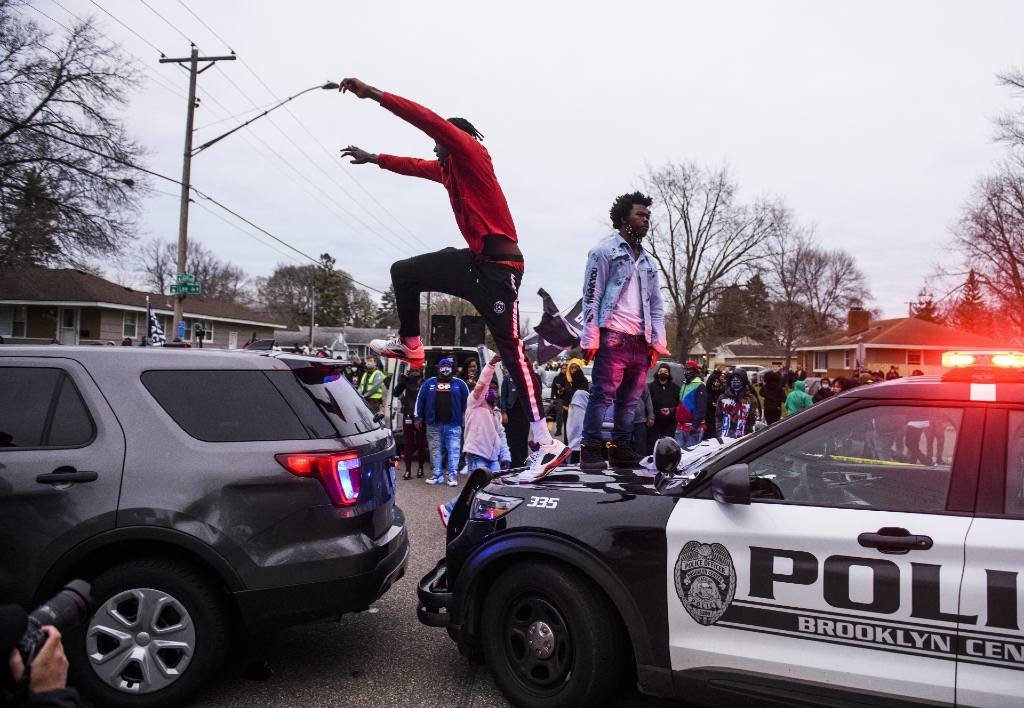 Destruction of federal property is supposed to be a crime.
edit on 12-4-2021 by LSU2018 because: Added pictures of the peaceful protests.

I think we are heading for a very bumpy ride this summer.

saw this morning and looked to see if posted. figured resisting arrest enablers would be on here posting about it.
turns out the guy had a warrant and in one article the mother said she heard one cop tell him not to run.


"I heard scuffling, and I heard the police officers say, 'Daunte, don't run,' and then the other officer said, 'Put the phone down' and hung it up," Katie Wright said. "And a minute later, I called and his girlfriend answered — that was the passenger — and said that he'd been shot, and she put it on the driver's side and my son was laying there lifeless."

Police said they believe body-worn cameras and dash cameras were activated during the incident.
Link

originally posted by: mamabeth
a reply to: LSU2018

I think we are heading for a very bumpy ride this summer.

To put it lightly...

I'm sure the Wright family will want $27 million from the city of Minneapolis, just like the Floyd family received.

There is an easy way to stop this, so if this is going on it is because some powers that be, are letting it go on.

Summer of 2020 there was a planned riot "protest" in Wauwatosa Wisconsin.
Bet you didn't hear about it... Yeah, that's because they arrested everyone that did not disperse.

Guess what, it worked. I'm all for peaceful protesting, but if anyone thinks that is what this is they are stupid.

BLM's founders must be running low on cash since their lavish home buying spree.

originally posted by: carewemust
I'm sure the Wright family will want $27 million from the city of Minneapolis, just like the Floyd family received.

This didn't happen in Minneapolis.

Keep your powder dry and your head on a swivel Mama.
With the Dems in charge, it's all downhill from here.

have popcorn at the ready! And a six pack. Probably more fun to watch than the MLB

The better way to stop this is either to stand down the cops or............just let'em burn everything to the ground.


originally posted by: carewemust
I'm sure the Wright family will want $27 million from the city of Minneapolis, just like the Floyd family received.

This didn't happen in Minneapolis.

Then the liberal Governor of Minnesota will certainly want to send at least a few million dollars to the Wright family, ASAP.

those boys are just blowing off a little steam. let them vent, and get this out of their system.
they are good boys and they dindunuffin.

Thank you, that adds even more to the story and solidifies more that the cops weren't just out looking for people to kill like we know the media will try to put it. Mainstream media.

originally posted by: LSU2018
We all know the cops don't go around shooting black dudes for the hell of it, and we all know bLM only gathers to destroy things and steal what they can't afford so none of this comes as a surprise.

i don't think we DO know all that, lol.... my goodness

originally posted by: carewemust
Then the liberal Governor of Minnesota will certainly want to send at least a few million dollars to the Wright family, ASAP.

You sound jealous, maybe make a request for a handout.

originally posted by: carewemust
a reply to: LSU2018

I'm sure the Wright family will want $27 million from the city of Minneapolis, just like the Floyd family received.

Meanwhile, I guarantee you Ashli Babbit's family hasn't gotten as much as a phone call. I was still waiting to get my bucket of cornpop ready for the MN riots but they've already kicked off.

posted on Apr, 12 2021 @ 10:11 AM
link
Read this story on Washington Post last night. The way they reported it, they shot him after he jumped back in the car to get away after being pulled over for "an air freshener hanging from his rear-view mirror." They eluded to the stop being BS because "they wouldn't have been able to see the air freshener due to the window tint".

I don't know all of the details of the incident but from what I've read so far, shooting him was not called for. There was no clear indication of threat or intent to cause harm to the police.

I'll wait until more facts come out before commenting further
edit on 12-4-2021 by TXRabbit because: (no reason given)

Then you haven't been paying attention.

She should be putting impoverished black families in those houses. It's as though she doesn't care about black lives at all... Bet she's a democrat, too.