No vax, no escape.

And reported here as well.


This is cold hearted, and numbingly evil. No vax no escape, no jab no shelter.

posted on Apr, 11 2021 @ 08:22 AM
link
It would be much worse if the entire island was in danger, but they don't necessarily have to leave the island in order to get to safety. 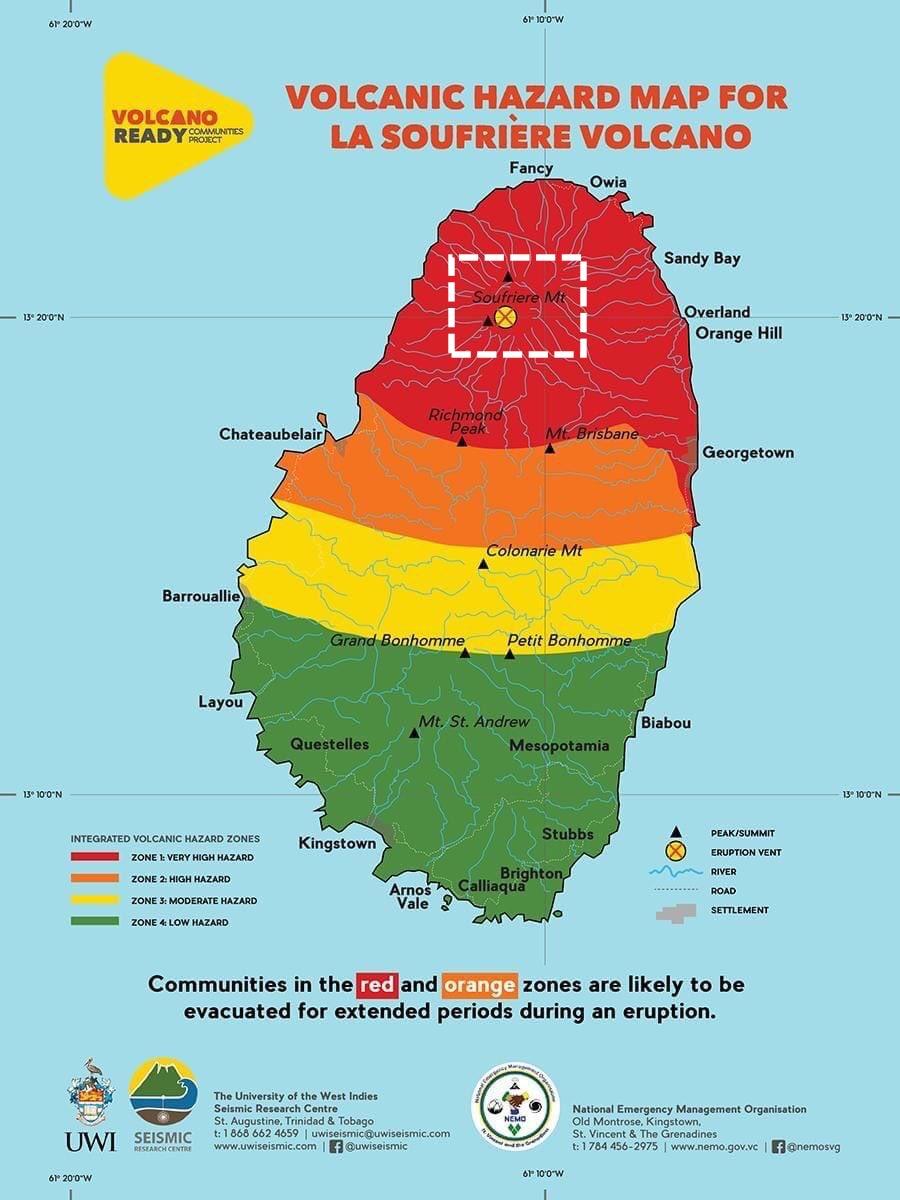 They just need to get to the south side of the 133 square mile island.


I was searching for some sort of number, regarding how many of the inhabitants have actually been vaccinated. Apparently, they had only just recieved their first shipment of the vaccine a couple days ago.

Further complicating matters is the fact that St. Vincent received its first shipment of vaccines only two days before the eruption. Throughout the pandemic, St. Vincent and the Grenadines has recorded only 1,789 cases of Covid-19 and 10 deaths, according to figures from the World Health Organization.


But also it seems that this news about evacuees needing to be vaccinated, only came from the Prime Minister of St. Vincent, and not from the cruise ships or the authorities on the other islands.


...St. Vincent and the Grenadines’ prime minister, Ralph Gonsalves, did announce in a press conference that evacuees would need to receive a Covid shot before boarding any of the two Royal Caribbean cruise ships and two Carnival Cruise Line’s vessels that arrived on Friday.

Furthermore, Gonsalves said that the neighboring islands of St. Lucia, Grenada, Barbados, and Antigua would accept evacuees, but only if they had been vaccinated.

However, despite Gonsalves’ announcement, neither Royal Caribbean nor Carnival Cruise Line have mentioned anything about keeping unvaccinated passengers off their ships. Royal Caribbean did say that “all precautions will be taken to protect the health and safety of the crew and passengers who board our ships,” but did not elaborate further. Nor have the governments of the aforementioned islands released any official statements clarifying whether or not they would accept unvaccinated evacuees.

I don't know if any of that has changed as of this morning.


The island nation of 110,600 people has vaccinated 10,805 people according to the World Health Organization*.


While the cruise ships are prepared to shuttle people to safe sites, they’re not sufficiently staffed to provide evacuees temporary lodging, Gonsalves said. Royal Caribbean Cruises and Carnival Corp. both have ships in the region to support the effort. In an emailed statement, Carnival said it was not making vaccinations a requirement for this humanitarian mission.

Even so, Gonsalves said residents across the Caribbean had been offering their homes as temporary shelters.


*Bloomberg apparently got their information from here: covid19.who.int... , which says the 10,000+ vaccinated, was as of April 1.


So there are probably more than that now, but if they only received their first large shipment of 24,000 doses a couple days earlier, then the current number still probably isn't much higher.

Also, many are now trapped in the aptly named world wide web. What an interesting choice of terms from all they had to choose from.

posted on Apr, 11 2021 @ 09:46 AM
link
I have always wondered why anyone would volunteer to be trapped on an island with an active volcano. It's not like Hollywood has given us dozens of movies illustrating why that's a bad idea.

You wonder if brainwashing is real?

Yes, it is real, even in Kansas.

A century ago Woodrow Wilson hired the nephew of Sigmund Freud to manage the manipulation of the public perception. His name was Edward Bernays, and some years later Josef Goebbels was a huge fan of Bernays.

In the last century, brainwashing has been brought to a very high art form.

As Casey of the CIA noted in 1981, when everything the American people believe is false, we will know the success of our misinformation efforts.

Regarding Covid, everything the American people believe IS false.

posted on Apr, 11 2021 @ 10:00 AM
link
So is anyone identifying these vax Nazis so they can be tried for their crimes against humanity?

originally posted by: IAMTAT
How soon before fire depts will only rescue you from the burning building...if you have a vax?

Well, at my fire station all 8 of us on my shift told them to suck it when they tried to push that poison on us. As far as the other 2 shifts, they did the same as far as I know. The “mandatory” word was thrown around in the beginning but hasn’t been mentioned since. They knew it was going to be a war, and a war we would win.

So people who have got the jab still got covid.
We were told this is normal and it could take a few weeks to become effective.

FFS this is getting more retarded by the minute!!

posted on Apr, 11 2021 @ 01:35 PM
link
There are a lot of tourist hotels safely located near Kingston that would normally lose business from cruise ship vacationers cancelling their reservations during an eruption.

“An account of the Island of St. Vincent in the West Indies, and of its entire destruction on the 26th March last” in the Weekly Journal or Saturday’s Post of July 5th, 1718 (also known as Mist’s Journal), based on correspondence from ships that had been in the vicinity.

The 1979 eruptions began with only a very short period of unrest, starting with a strong local earthquake on April 12. Eruptive activity began with a series of short-lived but violent explosions and that lofted a series of ash plumes, high into the sky on April 13, 1979; Good Friday.

They have been monitoring the volcano with computers and laser tech since the early 70's.

In an emailed statement, Carnival said it was not making vaccinations a requirement for this humanitarian mission.

So, all this "outrage" over another piece of Fake News. Congrats, ATS, you've done it again. "I have met the enemy and he is us." --Pogo

Most of my extended family are waiting, ready to pounce, on anyone that voices concern over the vaccinations. I cannot speak honestly with them. They scan the ranks weekly, forcing vocal support for the vaccine and analyzing responses for possible imposters.

Are people brainwashed? I am scared to death of my own family. I would say yes.

The problem was that St. Vincent and the Grenadines’ prime minister, Ralph Gonsalves, was apparently the one who started the rumor, during a press conference.

originally posted by: schuyler So, all this "outrage" over another piece of Fake News.

you just described the pandemic.

Being recovered from covid-19 is as good as being vaccinated, in terms of spreading the disease to others.

Governments and businesses who don't accept honor that fact will be destroyed.