Covid-19 vaccination requirements are fast becoming facts of life in the U.S., spreading business by business even as politicians and privacy advocates rail against them.

Brown, Notre Dame and Rutgers are among universities warning students and staff they’ll need shots in order to return to campus this fall. Some sports teams are demanding proof of vaccination or a negative test from fans as arenas reopen. Want to see your favorite band play indoors in California? At bigger venues, the same rules apply. A Houston hospital chain recently ordered its 26,000 employees to get vaccinated.

I do believe this will lead to the mark of the beast where you can't buy or sell without some type of pass on your cell phone and then they will say these are too easy to hack and switch to something like the quantum dot tattoo that Bill Gates is investing. It's interesting watching this unfold as Revelation 13 tied the mark to commerce.

16 And he causeth all, both small and great, rich and poor, free and bond, to receive a mark in their right hand, or in their foreheads:

17 And that no man might buy or sell, save he that had the mark, or the name of the beast, or the number of his name.

Will mass Covid vaccinations lead to the Mark of the Beast?

It's easy to see the Globalist roadmap. They want to use fear and "getting back to normal" as a way to gain more control over people's lives and I think introduce the Mark of the Beast system.

I do think this will spread despite privacy concerns.It will be a way to "get back to normal." I do see alot of younger people going to bars and clubs now. I would ride pass a bar a few months ago and it was like a ghost town now the parking lots are packed. My Nephew told me nobody is wearing masks in the clubs and bars either.

Edumakated
+26 more
posted on Apr, 10 2021 @ 02:02 PM
link
Unfortunately, far too many people don't see the ramifications of this nor how they may being manipulated through fear. They will make it difficult to function without proof of vaccine.

lordcomac
+28 more
posted on Apr, 10 2021 @ 02:34 PM
link
Once again-
people are dumb,
peoples stupidness is being manipulated to manipulate them.

None of this surprises me, and it shouldn't surprise you either...

As far as I can tell, "the government" made this virus, and released it. They made this 'vaccine' that doesn't prevent the virus and doesn't stop you from spreading the virus. (what is the point again?)

The virus doesn't have a particularly high kill rate, but the media is selling it like the black plague. The US has a huge elderly/retired population, who are all just about past due to expire... and surprise! this new virus is taking them out.

"the government" is now mandating papers to prove you've taken their "untested" jabs just to go to the store.

who in their right mind is trusting this crap?

Guiltyguitarist
+2 more
posted on Apr, 10 2021 @ 03:03 PM
link
No one is putting anything mandatory in my body. Especially when it was rushed thru, people are dying, and I don’t trust Trump anymore.( though he was still right about everything)


As long as we have Netflix, Amazon, Doordash and remote work we don't NEED to go out.

Focused? You can't even see the trend in your own post.
You go ahead and live in your pod, I'll take freedom.
Try doing a little research on where China is now with social credit and where the tech pervert, Epstein island Bill Gates wants you to be.

Not going to get into the mark of the beast stuff because, it's silly and while taken as a metaphor, as it should be, it fits pretty well, but people have this issue where they can't help but take the Bible literally, so it doesn't add much.

As for the rest of it about vaccine requirements and overreach and such...

Yeah...it's very obviously happening and because it's happening mostly through private initiative rather than government mandate, you'll get that same thing happening that happened when all those social media accounts got axed.

Not to mention all those people that actually think it's a great idea who believe anyone that doesn't get the vaccine deserves to live as asecond class person.

Then there's the sheep who just want to be told they can be free again who acquiesce just to get it over with and admonish others who don't.

People are generally, not actually as stupid as the media would have you believe. The fact that this is even happening at all means enough people don't see this as being serious enough to bother with without coercion of some kind.

Here's something that would make an interesting survey.

Reasons for getting the vaccine.

What do you think the odds are that in such a survey, that

'Just to get back to normal.'

Would rank higher than

'Because I'm scared of covid.'

If your reason for getting injected with something is, because I just want to be allowed outside without a mask again, maybe that should be some cause for concern. That's not a good reason.

posted on Apr, 10 2021 @ 03:53 PM
link
Part of me thinks we hear the "mark of the beast stuff" because a lot of people think that's BS and ergo they will take the vaccine. Any passport or restrictive, prohibitive, or exclusionary tactics if any will be on a state by state basis and even then we would have to go over the 65% to 70% mark. Nationally that's August 2nd at current rates, in Georgia its October 1st so any national stuff isn't gonna wash statewise in a lot of states. 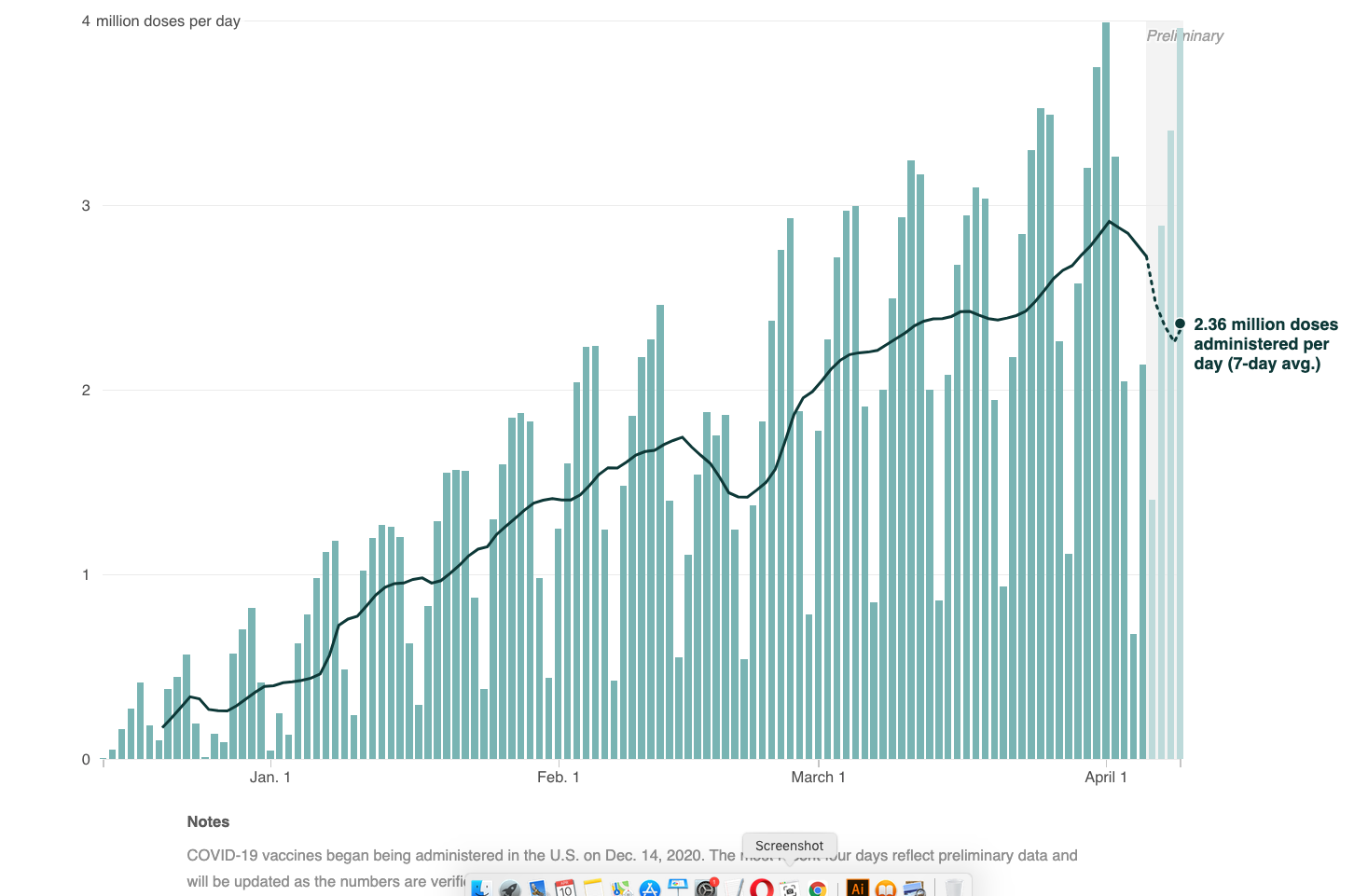 originally posted by: putnam6
Part of me thinks we hear the "mark of the beast stuff" because a lot of people think that's BS and ergo they will take the vaccine. Any passport or restrictive, prohibitive, or exclusionary tactics if any will be on a state by state basis and even then we would have to go over the 65% to 70% mark. Nationally that's August 2nd at current rates, in Georgia its October 1st so any national stuff isn't gonna wash statewise in a lot of states.

This Georgian says "Hell Naw"
I have read The Books.
October ?
How bout the 5th of Never ?

I shall wait and let the ignorant go first and see what happens.
edit on 4/10/21 by Gothmog because: (no reason given)

We already have seen some GA back bone against Corporations. We will not be bullies and I will not show “Paper” other than my State ID or Drivers License at minimum required.

posted on Apr, 10 2021 @ 05:06 PM
link
LOL I agree and you and I aren't alone, it's been mentioned before if they float and act as they can do these nationally individual states aren't all gonna comply. Especially on an infection/virus that the lethality is well less than 4%.

That doesn't mean they won't piss and moan, coerce, threaten and bribe, or worse along the way.

Already hearing that for example Valdosta has plenty of vaccines, but the majority of those getting it now are from Florida. Georgia has only 15% fully vaccinated and only 29% with one dose.

In other words, Georgians aren't rushing to get the vaccine. My doctor's office has it and I asked how it is going and she said at first it was busy but now maybe 2-3 a day. She definitely isn't insisting I get it, when I first asked her what her thoughts were she said "Let's wait on that, till will figure out the rest of your issues" ie I'm at risk age and healthwise and my Doctor is saying let's wait, which basically confirm my thoughts anyway.

I have pretty much gone back into lurking mode, because I have had nothing to add to most of the threads, that would not be either repetitious, or would be fuel added to the fire. I found myself continuously in a place where no one was listening, only memorized by the elements.

I am probably making a mistake by sharing my recent predicament. None of my huge team of doctors can explain, my immune system suddenly going haywire. My whole body went into inflammatory mode, and almost every joint, and even my retina became inflamed, to the point that I have been placed on steroids, for now starting with a three month weaning process.

I have been exposed to a slew of people that have recently received the vaccine. It is the only thing that has changed in my life, and though only a few of the team of doctors are willing to admit that it may be a cause for my weird development of immunosuppression, I am suspicious.

I have not been tested for the virus, nor have I received the vaccine, the VA won't come near me with the vaccine, because of my history of untoward reactions to previous vaccines.

Making the vaccine a requirement with so many people like me, sitting in a situation where there are just too many unknowns, I don't think is safe, nor sound.

edit on 10-4-2021 by NightSkyeB4Dawn because: Corrected spelling error.

Vaccine may not be the real truth behind the over the people freedom grab.
Wgen law enforcement is told to go against the wishes of its people, just look at hong kong and myamar what is taking place .
Let's hope it doesn't happen in America.

Vaccine may not be the real truth behind the over the people freedom grab.
Wgen law enforcement is told to go against the wishes of its people, just look at hong kong and myamar what is taking place .
Let's hope it doesn't happen in America.


Dig your posts especially because it's from a perspective outside this US. Part of me thinks China sees all of Asia(except Japan) as its domain. Just a matter of how and when they make their move.

posted on Apr, 10 2021 @ 07:16 PM
link
a reply to: NightSkyeB4Dawn
Have you been sleeping with,having sex with a vaccinated person?