This sort of thing happens all the time in liberal/progressive/Democrat cancel culture.

Christianity and thus Christians are seen as basically intolerant and evil people by the liberal cancel culture.

The Methodist Church for example has more members in Africa now than in the US, which is why the church is splitting because the liberal US churches and the conservative African churches are disagreeing on ordaining practicing homosexuals as clergy. The Presbyterian Church has a massive number of members in South Korea.

Christ gave one new commandment that is central to all Christians stand for and the liberals/progressives/Democrats are so ignorant of the religion that they don't know what is the most important of all commandments Christ gave Christians. It is: Mark 12: 31 31 The second is this: 'Love your neighbor as yourself.' No other commandment is greater

These are dangerous ideas to liberals/progressives/Democrats whose main goal right now is to divide people into identity groups (causing them to fear each other, which leads to hate). Liberals/progressives/Democrats encourage everyone to look #1 at skin color and #2 at gender identity before speaking or interacting so you don't accidentally hurt feelings: rather than treating everyone the same with respect and kindness : this causes people to group others into those whom one can not interact with for fear of accidentally hurting feelings and thus being socially destroyed and fired from ones job.

Twitter is a private for-profit corporation, not a religious organization.

To my knowledge,only Thanksgiving is an American tradition.
I don't study pagan religions and traditions and try to avoid
them.

To some, anything not invented in America, is pagan. These same also think the God of the universe is specifically American.

Passover is not pagan,easter traditions are pagan,hot
cross buns,hiding eggs...Remember,a roman leader merged
the Christian religion with the Pagan religions into what
we have today.


That is exactly why almost every holiday with the exception of Thanksgiving, has pagan origins, Rome highjacked them all, merging them with traditionally old pagan ideology. Roman Catholism pulled so many lies with them, and most Christian groups that splintered off from them pulled some of those lies with them when they broke away. Lies that are still with us today.
Just one example that most Christians have abandoned in the 21st century; purgatory.
A lie believed for centuries, designed to extort money and control people by the local clergy.

A lot of the early Christian converts were Pagan to begin with. In fact for well over 1,000 years in Europe it was common for people to be both Pagan and Christian. Or at least to follow elements of both. The early European church tried for centuries to stamp out the Pagan elements. If you go to northern Europe and look at the old stone Churches you will see that they often contain pagan iconography as well as Traditional Christian images.

In many ways pagan beliefs were compatible with early Christian ones because they covered different areas and did not openly conflict with them, or they had simply become part of the local culture and weren't seen as being particularly religious.

Similarly, very many pagan beliefs were being pushed out by the popularity of Christianity. So the pagans, trying to prop up their falling numbers, adopted many Christian traditions.

It wasn't all one-way and it is reasonable to assume there were more pagan traditions adopting Christian ones, than the other way.

posted on Apr, 5 2021 @ 06:53 PM
link
Soon like the majority of conservatives Christians will be pushed into hiding by the intolerant, racist, hate-filled, murderers that call themselves democrat.

posted on Apr, 5 2021 @ 07:17 PM
link
Have never had or ever will have a Twitter account.
Proud of it, and lately, thankful for the decision to never let it into my life, as well as facebook , spotify and the rest of that garbage. Messaging and Phone calls are all you need.

Pushing fanatics into a corner is the right thing to do.

defining fanatical is a habit to align those with less tolerance to others a unified front. It is the long celebrated strategy of the left. Today's strategies are no different than the days of the democrats KKK program or the era of Jim Crow. You don't have to look far to see the similarities of the old anti-fanatics creating an enemy to hate. Even old George Bush tried the strategy and succeeded in convincing the US in a bipartisan way the murder of 4 million + sand people was ok cause they were Muslims.


originally posted by: Peeple
What else could it be? Stupid twitter. "He is risen" can obviously only mean Cthulhu.

And here I was thinking I was the only one who took it this way... 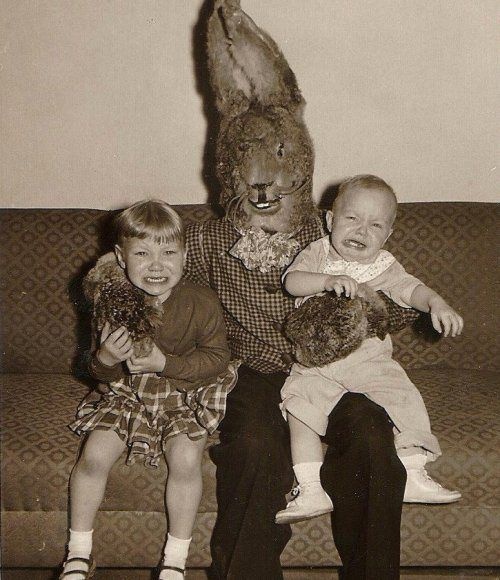 This is how I've always pictured Jimmy Stewart's pooka looked like in "Harvey."

Pushing fanatics into a corner is the right thing to do.

Marjorie Taylor Green may be a fanatic. However, censoring religious beliefs -- especially (but not necessarily limited to) mainstream ones -- is just wrong.

I'm not a particular religious person myself, but I support people's right to expression. If it becomes OK for social media censor someone for saying "he is risen", then (for the sake of consistency) they should also censor posts from a member of a black evangelical church who might tweet "praise the lord!" -- although I can see that becoming a problem for the social media platforms if they do.

Until you're the one that's labeled such...?

Methinks that many of you have no clue what a true fanatic is.