posted on Apr, 1 2021 @ 04:05 PM
link
A recent thread by Encia22 reminded me of an incident I had last week at a local independent restaurant in my neck of the woods. They have a sign in the window that reads... 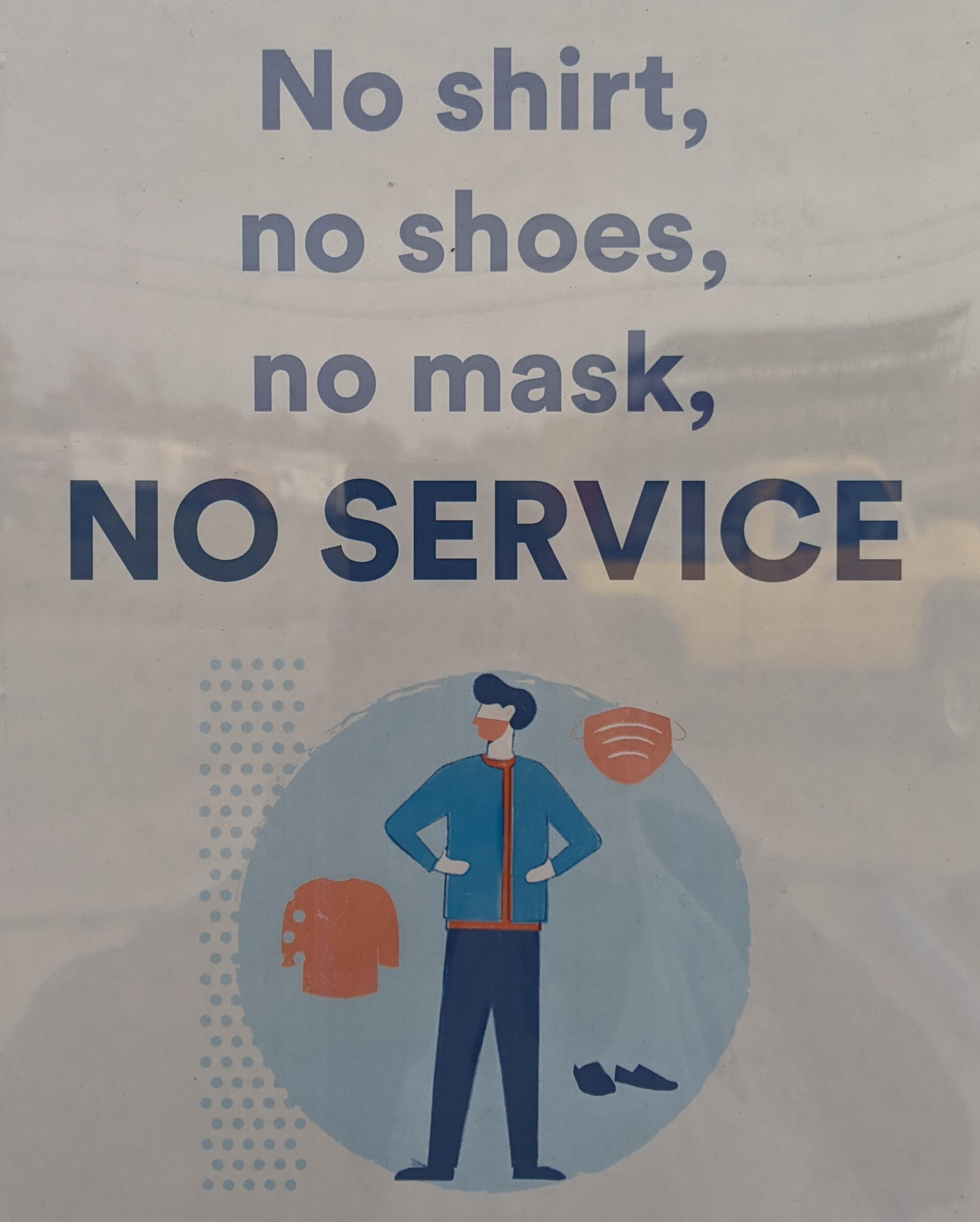 So like the dutiful little peasant I am, I put my mask on and went in to place an order through my mask and a sheet of plexiglass of course. I try to speak loud enough to lessen the amount of "huh's?" from the cashier and listen well enough to hear the them through their mask and the plexiglass, but inevitably someone still says "huh?".

After placing my order and sitting down until my number is called, I feel a tickle in my nasal cavity and resist the urge to sneeze by wiggling my nose and mouth under the mask. This works temporarily and I figure I'm good, but not to be denied, my sinuses come back with a vengeance in under a minute and out comes a strong and loud sneeze that should have been in a Hollywood comedy.

At that moment, the one other person waiting for their order and the 6 people working behind the counter all looked at me with near terror in their eyes. I was seriously wondering for a moment if someone was going to call the police and the health department. Then I smirked under my mask, and in my best Vinnie Babarino voice (which isn't very good) I said "What!?"

Some had already turned back around, but the ones still stealing glances at me then turned away and tended to their business. Is this what we've become in just over a year? SMH.

edit on 4/1/2021 by Klassified because: DB is out of Doritos and french onion dip

originally posted by: RMFX1
I have this problem purely because I'm a smoker. It's ridiculous. I also get seasonal allergies so that'll be fun soon enough.

Me too. Whenever I have to cough in public I say, "Don't worry, it's just lung cancer."

posted on Apr, 1 2021 @ 04:25 PM
link
Mass psychosis.
It works both ways though.
It's very handy for clearing traffic jams at the grocery store.

You.. thought you did #1 vs what people heard.


Then that second tickle kicked in😆

originally posted by: Klassified
I feel a tickle in my nasal cavity and resist the urge to sneeze by wiggling my nose and mouth under the mask. This works temporarily and I figure I'm good,


Screw that... I enjoy coughing or sneezing when I feel the urge - hell, I even do it just for fun sometimes, just to to see the ridiculous reactions from the sheeples, look anyone looking at me in the eye, and laugh.

originally posted by: RMFX1
I have this problem purely because I'm a smoker. It's ridiculous. I also get seasonal allergies so that'll be fun soon enough.


I have this problem purely because I'm a smoker. It's ridiculous. I also get seasonal allergies so that'll be fun soon enough.

i was getting gas on a friday, after work, went in to get smokes. place was packed, i felt it coming on, fought it until i got to the register, then came a big ol lunger cough, clerk had just came back with my smokes, i held them up and everybody behind me just laughed.

ETA: ever since then sweet leaf runs through my head when i cough.

Can't wait for my hayfever to kick in this summer,people are gonna lose it.

originally posted by: Mandroid7
Dude this guy is my hero.

You sneezed with a mask on and people had a problem with it.

Just goes to show you just how stupid some people are.

originally posted by: Mandroid7
Dude this guy is my hero.


Dude this guy is my hero.

You have a low bar.


originally posted by: Mandroid7
Dude this guy is my hero.

If the roles were reversed, someone would have had him brought up on automatic hate crimes charges, methinks.
Anyway, did Asian dude ever get caught for that bike-swinging Hulksmash bull#?

posted on Apr, 1 2021 @ 05:23 PM
link
yes the rampant paranoia is dreadful and encountering it is inevitable, if one ventures out among the frightened. do people think nobody's ever going to cough or sneeze again? are they going to cringe in fear every time they see someone clear their throat? when does society snap out of this trance?


when does society snap out of this trance?

I'm thinking in 3 or 4 months things will start to settle down thanks to the vaccines. Probably by New Year things will be "normal" nearly everywhere as far as imposed social distancing and masking goes.

I think masking as a personal choice may continue for some time though, along with stigmatization from either camp. Probably not a bad thing as far as public health goes. It works.

Do you think spitting on sidewalks is ok?

Just today, I was thinking certain aspects of masking in stores is good.

Some people are just pigs.
Some people still get too close for my comfort....and I think no one should ever crowd into another's personal space.

Part of me thinks anyone who every coughs or sneezes without covering the involved orifice should have to mask for the rest of their lives!!!!!!!!!!!
But those people have been health hazards before covid was a thing.
And we will never have a perfect world. LOL

As for spitting, it has always been a nasty, ugly habit.

Phage,as smart as you seem here,do you really believe
everything will go back to "normal" by years end? I don't
see anything going back to normal again.Those that duped
us into this will continue to find ways to prolong it.