Matt Geatz story gets stranger than before.


"In exchange for the funds being arranged, and upon the release of Mr. Levinson, the team that delivers Mr. Levinson to the President of The United States shall strongly advocate that President Biden issue a Presidential Pardon, or instruct the Department of Justice to terminate any and all investigations involving Congressman Gaetz," said the document Kent reportedly gave Gaetz's father, which bore the heading "Project Homecoming."

This sounds super weird on it's face, and should be even stranger as time passes.
Background, Geatz was accused of doing something with a 17 year old in a NY times story yesterday:
www.nytimes.com...

I'm on the right and tend to be untrusting of Democrats, the FBI, and the government as a whole, so take that as you wish. But I am also for equal justice for EVERYONE. If Matt broke the law, off to jail. If he didn't, then find who is responsible for all this, and put them in jail. A crime has committed here for sure. It's just a bit murky as to what crime, and who dunit.

If FBI folks come up missing or dead in relation to this, and you don't see a coverup, you aren't looking. I think this needs to be a top priority to find out if Geatz is a pedo, or if the FBI is still corrupt. (after being proven to be corrupt and no change in leadership) I wonder which way I think it will go?

Gonna have to simply wait and see what comes to light. This is incoherent so far as much of the information seems to be missing.

So....when are they gonna talk to ole hunter about the pictures the FBI and just about anyone who paid attention knows exists?

Those ones involving crack and underage incest??

It doesn't say whether or not the father actually deposited the 25 million.


Many would agree with you.

Especially if you remove the word "now" from your sentence.

originally posted by: FauxMulder
a reply to: network dude

It doesn't say whether or not the father actually deposited the 25 million.


In the Tucker Carlson interview, he claims that his Dad was supposed to make a 4 million down payment today, but the NY times article spoiled that. He (Matt) claims they were working with the FBI on a sting operation to get the blackmailer.

Some serious allegations have been made, the former DOJ guy was named on air and accused.

I haven't a clue where the truth in all this is at, but it's so screwed up, it will make for some fantastic threads on coming up with theories. Waiting for the Aliens angle to pop up. (don't disappoint ATS)

posted on Apr, 1 2021 @ 11:44 AM
link
Bizarre story to say the least.
He sure has not kept it close to the vest with all his TV appearances about it, which makes it even more bizarre.

It's definitely a strange story.

This is the FBI who can't (won't) stop child trafficking yet gets involved and solves things real quick when it's politically convenient?

posted on Apr, 1 2021 @ 11:52 AM
link
a reply to: dug88
You are silly. Biden is just bidding his time to wait for the trial of Hunter, then whoops, his father pardons him and he gets a very clean slate all over. 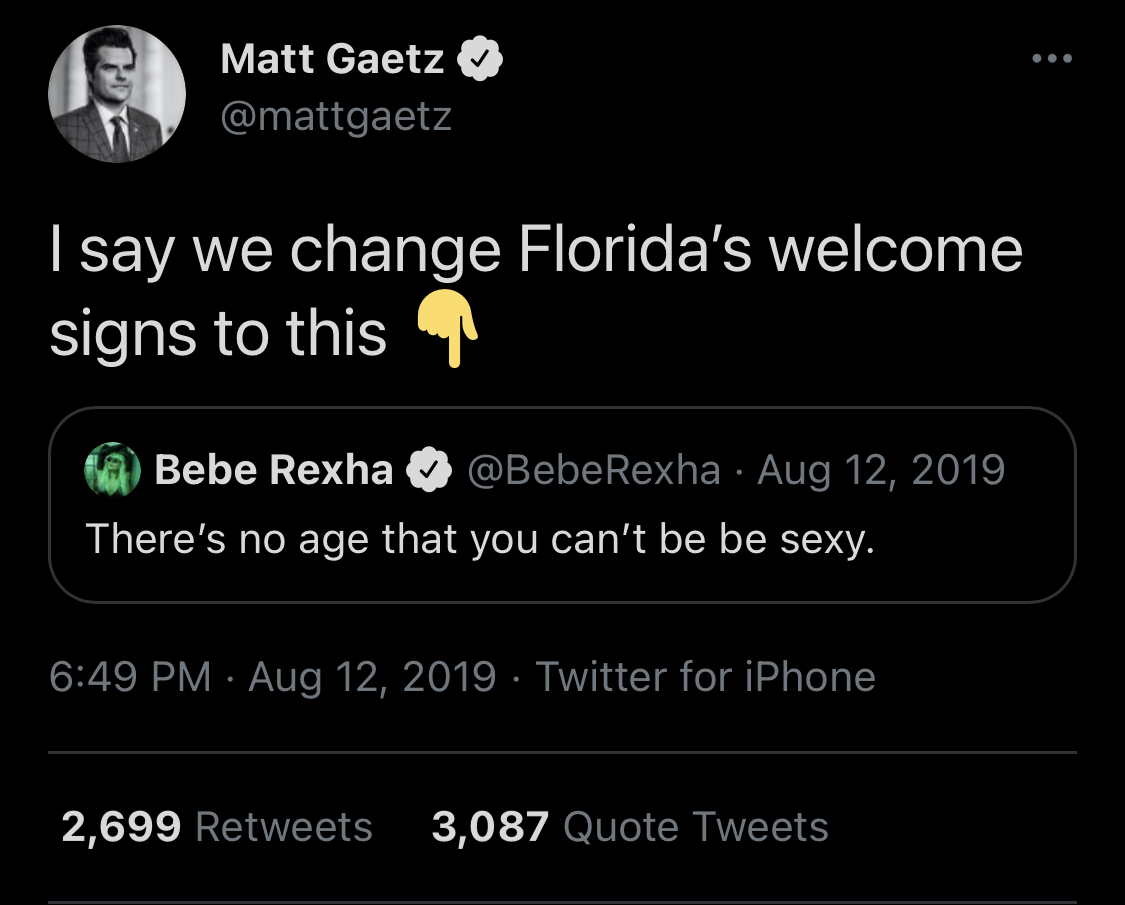 To me Gaetz is in the same category as Lindsey Graham. His pro Trump cheerleading is too over the top to be sincere. Plus, it doesn't help that he looks like a revival tent preacher.

Waiting for the Pop-Up.

A contrived story to detract from the tyrannical over-reach of the Biden administration.

It's MSM and social-media generated hype.

posted on Apr, 1 2021 @ 12:30 PM
link
Was there a FBI investigation already and did his father wear a wire as part of it all...Seems these things are pretty much easy to prove, or not.

Per the nytimes story it’s not solely Geatz who is being investigated but a political ally?

The three people said that the examination of Mr. Gaetz, 38, is part of a broader investigation into a political ally of his, a local official in Florida named Joel Greenberg, who was indicted last summer on an array of charges, including sex trafficking of a child and financially supporting people in exchange for sex, at least one of whom was an underage girl.

Are they both being looked at for the same crimes or is it separate?

This is looking like he is being accused because he was around Mr. Greenberg.
edit on 1-4-2021 by TheLieWeLive because: (no reason given)

So far the girl in question doesnt exist, just ink.