not a fan of bill clinton, at ALL.

if matty is found guilty we shouldn't go soft on him was my point. do you agree?


So. You have no actual evidence?

Is the investigation for extortion or under age sex?

ok, sweetness, he lied about a *oral sex*, after years and years of whitewater. good lord..

he had the balls to go under oath and answer questions unlike the previous coward.

anyhoo, i find this current scandal hilarious. don't know how it will pan out but the interview with tucker and the extortion allegation i find very very interesting. not to mention his buddy joel greenberg - is he the one pointing fingers? could this go deeper, cuz ol joel is in a boat load of trouble.

i consider matty a world class tool, the kind of guy you just want to smack, so i'm enjoying the show.


Are you posting about Bill Clinton?

You seem a bit unhinged. Sorry you don’t get the Democrats and Mainstream media have cried “wolf” to often to be taken seriously. For people that don’t buy into any means possible, the democrats are a frightening joke. From lockdowns to letting illegals loose that have covid.

edit on Wed Mar 31 2021 by DontTreadOnMe because: (no reason given)

Like Adam Schiff’s investigation into Russia Trump collision where he claimed he had evidence he never produced.

So who is the investigating authority? I am asking with all seriousness.

If he is guilty, he is guilty. But until he is convicted by a jury of his peers, he maintains his innocence.

If there was evidence, or he was a flight risk. He would be held on bond.

the investigation started last year during trump administration. from what i understand the extortion allegation started this march.

my bad, that was meant for someone else.

again, with the russia deflection, talk about unhinged. lol

again, with the russia deflection, talk about unhinged. lol

Well. Then list the actual evidence against Gaetz that’s not from unnamed sources? And who is doing the investigating.
edit on 31-3-2021 by neutronflux because: (no reason given)

Putting them in parenthesis is awful oppressive and bigoted IMHO


you do remember your side impeached a president for a consensual *oral sex*, right?

awww, but you want to be soft on a powerful person who may have had sex with a minor. that's cute and telling.

That was 30 years ago LOL

Your side started the KKK and a Civil War... everyone knows you want another south to rise again
edit on Wed Mar 31 2021 by DontTreadOnMe because: (no reason given)


All rules for POLITE political debate will be enforced.
Members must also Stay on Topic!!!
Reaffirming Our Desire For Productive Political Debate (REVISED)

I missed the Tucker Carlson interview.

Watching CNN and heading over to Fox to see what is up over there.

The timing of this is interesting.

let me know when Cuomo is accused of pedophilia and sex trafficking.

also, last i heard, a boat load of democrats are calling for him to resign.


Lots of talk, no action. If they really wanted him gone, they would be doing more than lip service. At this point, could anyone on the planet defend this scumbag? Will you? Talk is cheap.

There was a demand for money in exchange for a commitment that he could make this investigation go away along with his co-conspirators," Gaetz said, identifying the alleged extortionist as former DOJ official David McGee.

The law offices of Beggs & Lane, where McGee is now employed as a private attorney, denied those allegations in a statement Wednesday night.

"The allegation by the Congressman is both false and defamatory," the statement read. "Mr. McGee was the Chief Assistant United States Attorney for the Northern District of Florida 25 years ago. During his tenure with the Department of Justice his reputation for integrity and ethical conduct was impeccable. It has remained impeccable throughout his 25 year tenure with our firm.

While he was with the DOJ he would never have entertained a scheme such as what Congressman Gaetz suggests nor would he today. Unsubstantiated allegations do not change that fact." 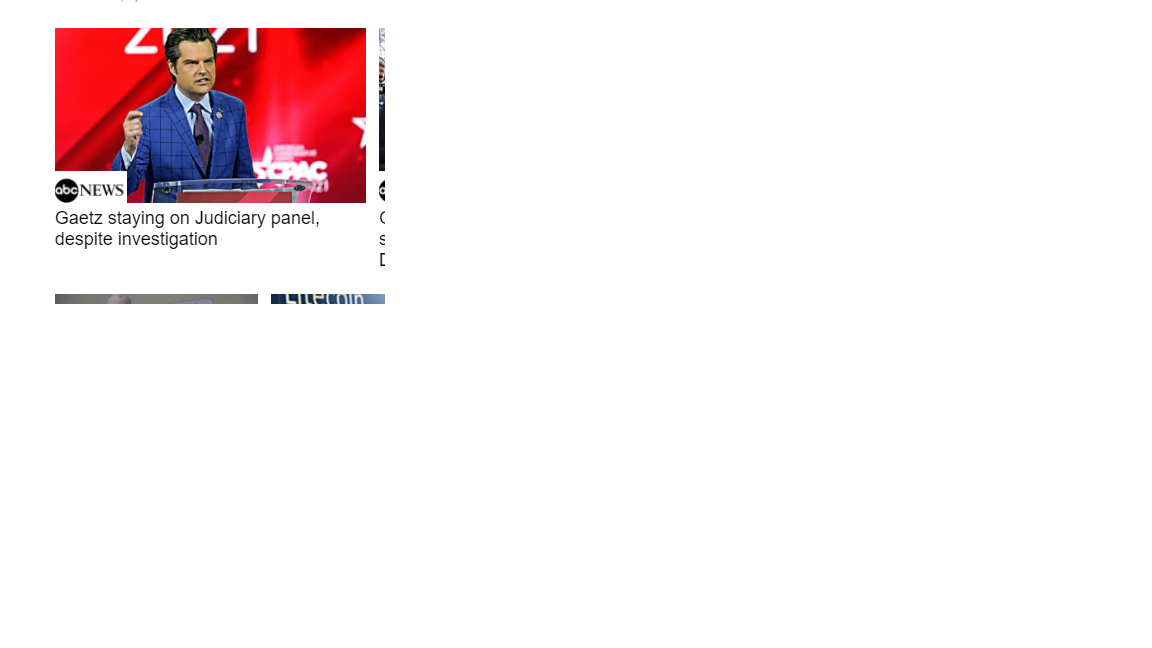 a clip from the ABC news site, worrying about Geatz still being on the Judiciary panel, but no mention at all about Swallwell, Fang Fang and the Intel Committee.

originally posted by: Boadicea
If the guy was boinking a 17-year-old girl, yeah, that's pretty sleazy. But I'm not seeing any accusations of forced relations, if she is underage 'forced' doesn't come into it - it is statutory rape and in many states 17-year-olds can legally consent to sexual relations with anyone of any ageNot in Florida - age of consent is 18. So it's not criminal in the statutory sense eitherIncorrect. Creepy? Shameful? Misguided? Sure. But not necessarily criminal. It is also a Federal Criminal Offense to cross state lines with a minor for the purposes of sex - its called trafficking.

If he was having a sexual relationship with a 17 year old girl in Florida, it is statutory rape. Period.

If he paid for her to accompany him on travel out of state while maintaining that sexual relationship, it is trafficking (actually he doesn't even necessarily have to take her out of state to be charged with trafficking.

If he was having a sexual relationship with a 17 year old girl in Florida, it is statutory rape. Period.

If he paid for her to accompany him on travel out of state while maintaining that sexual relationship, it is trafficking (actually he doesn't even necessarily have to take her out of state to be charged with trafficking.

And, no, simply traveling with her across state lines does not equal "trafficking":


A victim is forced, in one of a variety of ways, into a situation of dependency on their trafficker and then used by the trafficker to perform sexual services to customers.


Sex Trafficking -- Wikipedia
A man having a consensual sexual relationship with any person does not constitute "trafficking."

Nor have I seen any indication that this girl was forced or coerced to do anything, nor that she was in a "situation of dependency" on Gaetz, and there are no reports that she performed sexual services for paying customers either voluntarily or forced.

If the claims are true (and that remains to be proven), then I'll call him a creepy dirty old man. And I'll pity the girl making such a huge mistake. But she's got the best excuse in the world -- youth. She's young and naïve and is going to learn a lesson the hard way. But she can and will pick up the pieces and move on.

I will not equate her situation to the many many girls who have no choice and will never be able to "move on." And by you doing so, you are minimizing and belittling the very real suffering of true sex trafficking in all its horrors.

originally posted by: crappiekat
This story is heating up fast.

I missed the Tucker Carlson interview.

Watching CNN and heading over to Fox to see what is up over there.

The timing of this is interesting.