Great meme, Phage. Why do you think it's a trap? You think they're setting up the populous for something big?

But they seem to have something to sell.

originally posted by: SLAYER69
I dunno about some of you but for me its becoming harder and harder to deny there be some strange Sh!t going on....

This is the third thread in a row on this same topic. Seems more like a UFO psy-op than anything interesting in the three pentagon videos, and the outfit hyping them, TTSA, was an entertainment company, telling demonstrable lies about those UFO videos in their television series.

Not that strange since UFO psy ops have been part of history. If you still think the 3 pentagon released videos show anything strange, maybe you haven't seen these:

Gimbal video, is named after the Gimbal mechanism used by the optical system, so that's what is rotating, not the airplane or whatever it is in the video, but just the name of the video being called "gimbal" should give it away:

Mick West's playlist has more on the Gimbal and he also covers the other two videos, FLIR and gofast, with over 20 videos in this series. I've watched all of the first 20 but he keeps adding videos and a couple of the latest videos I haven't seen yet, I'm about halfway through his interview with Kevin Day whose story is not consistent with David Fravor's story.

I don't necessarily agree with Mick West's or Thunderf00t's guesses of what the objects might be and officially they are still unidentified, but what I do agree with them about as well as Goddard's journal is that the videos don't show anything that interesting, contrary to all the hype and claims made about them. We are talking about the videos here, not David Fravor's eyewitness account, for which there is no video, but I must say I don't know why people praise Fravor's competence so much when his sole mission was to ID the UFO and he says it never occurred to him to turn on his camera to aid in identification. How is that consistent with people praising his competence? To me it seems like a major blunder to not turn on the camera on a mission to ID the unknown, but anyway, the video analyses are about the videos we do have; we don't have any video of what Fravor saw, just to make that clear, since many people seem to get confused about that point.

originally posted by: beyondknowledge
Commanding officer: "This report says we have so many craft in so many tests going on that we can't hide it from the public any longer. What are we going to do about it?"
Public relations officer: "SIr. We have been working on that for a while now. We have hours of really crappy videos, misidentified log reports and other material to start with. From that we can release enough misinformation to keep the public and anyone else happy for years. Show them what they want and not what we have. SIr"

That's not a bad guess. I can't say I know why they are doing it but it sure seems like something along those lines plus maybe to sew some confusion to keep US adversaries off-guard and flood UFO search results with not very interesting things like the three pentagon videos. The videos themselves aren't very interesting, but the psychological result of the psy-op that gets some people believing the hype that they are interesting objects is actually more interesting. Fravor's eyewitness account is interesting, but there are lots of issues with that, not the least of which is that it's not a self consistent account, nor is it consistent with the account of other pilots nor is it consistent with the account of radar chief Kevin Day.

I want to believe but this report is from the government.

I'm told this will be one of the UFO documents referenced by the report (Source: The Black Vault). What's not to believe? 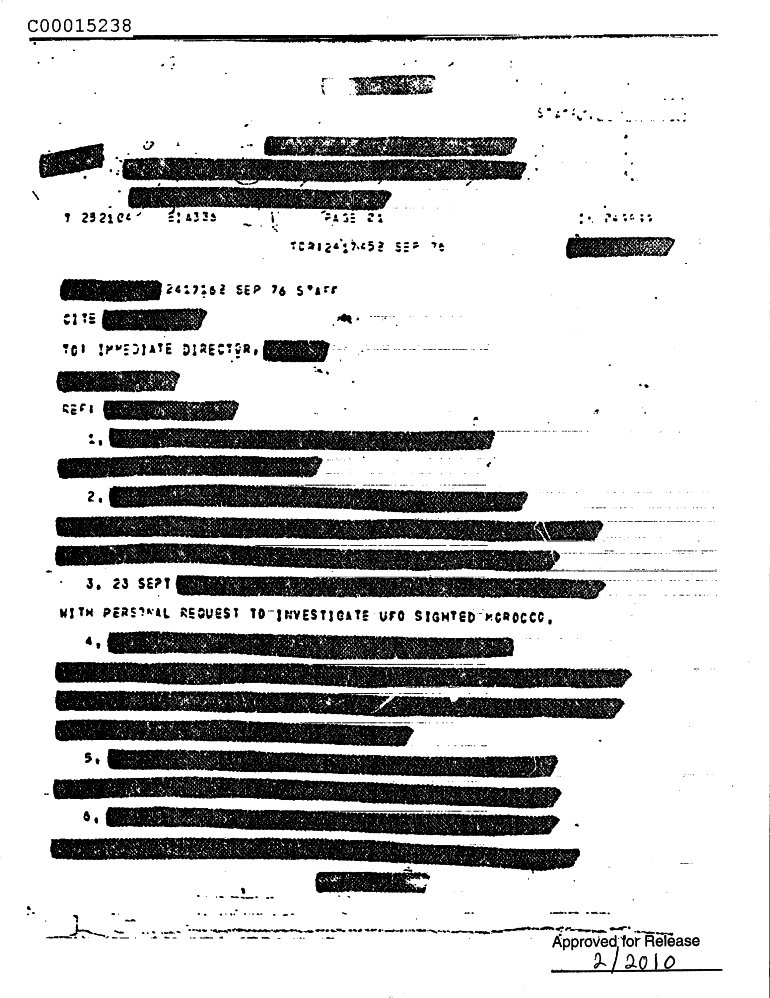 There is no reason for them to be involved , other then making profit.

They have luis Elizondo to fatten up the credibility , worked on a UAP program so gotta be legit right ?

Here we are still twisting thumbs waiting on the metallurgic test results from supposedly alien alloys catching dust in some vegas warehouse.

I think that conversation happened in the 50's or 60's. All the governments investigation programs were real. They did real investigations into the UFO reports. They disproved what they honestly could then ether lost or misreported the rest of the investigations.

What we are seeing now is what those programs eventually became. I have no clue as to whether it is a USA thing or a global thing. If USA, they are covering up technology. If global, it is an attempt to unite us under one threat of a them, that would be after the current political problems sort themselves out.

It would be very interesting if the US capital has to be retaken by force and they find the alien bodies that are rumored to be under the White House.

originally posted by: MRinder
Governments always need an enemy for you to be afraid of. That way you need the government to protect you from the bogeyman and so you will not turn your anger toward the government. They have throughout history needed a range of things for you to fear in order to control you.


"We've always been at war with Eastasia..."


So a one world government will require an extra terrestrial enemy.

A government that can't put people back on the moon, doesn't give me much confidence against an enemy that can hop across the galaxy. Unless of course the narrative will be us allying with a "good" alien race against an "evil" one, with a single government and no questions being necessary for our survival.
edit on 28-3-2021 by gb540 because: (no reason given)

I dunno about some of you but for me its becoming harder and harder to deny there be some strange Sh!t going on....

Skeptic finally starts to come around by falling for UFO Mythology 2.0.

But they seem to have something to sell.

AKA "Setting us up for something big."