When would the line be crossed

We need a new option.

Blair killed Labour but their zombie corpse continues to decompose as it attempts to retain the semblance of humanity by replacing policies with whatever the twitter sjw mob screams for loudest.

Tories are and always will be greedy, disconnected elitists with a god complex but no talent to back their imaginary superiority.

The rest are just clowns.

A new option would be favourable by many (depending on policy, of course) but the two main parties just take it in turns to screw us all.
Unfortunately, any new parties are instantly smeared as far right and attacked relentlessly by the media, who seem very keen to keep the status quo regardless of the fakery they produce in an attempt to persuade us otherwise.

Actually, we agree on a fair amount. There's some minor details I'd argue with but for the most part I enjoy your posts. You seem more polite than most so cheers to you too.

posted on Mar, 26 2021 @ 10:14 AM
link
I think nuclear war would ultimately be an accident or false flag. Basically, a missile or bomb would go off accidentally and cause another country to respond or might be provoked by a terrorist attack.

My biggest concern is India and Pakistan as they don't have the systems in place to control their arsenals. High amounts of corruption and religious lunatics.

I am actually reading a post-apocalyptic prepper fiction book about nuclear war. In this book, the deep state in the US thru China actually creates a situation to trick Islamic countries in middle east to attacking Israel resulting in nuclear war. Basically, China (under the US) hires mercenaries to attack some Islamic mosque / base but make it look like the work of Israel.

It escalates with the Islamic country attempting to nuke Israel but failing. However, Israel turns Iran into a parking lot. This then sets off Pakistan and India. Then some how North Korea winds up lobbing one to the west coast of the US. Happens over the course of a few weeks. Not all at once.

originally posted by: Tulpa
a reply to: andy06shake

I'm assuming you aren't familiar with the current mindset within the UK government.
Everyone is weeeelly weeeelly sowwy about everything British and we are supposed to cheer on the countries that might hate us.
It's all our fault.....everything......

In fact, if the country who wanted to attack us would tip us off in advance, they would probably queue up to help them.

The New GB is bad and we should feel bad . Must woke more.


No, no, I'm definitely not seeing that. The way it's looking to me just now is Scottish bad, Irish bad, Welsh bad, English good, British good. We are seeing the wholesale rebranding of Scottish Produce, Irish Produce and Welsh Produce being rebranded as British Produce.

I mean what's wrong with, for example...

Food labels should state where they come from.
Remember Parma ham? Cornish pasties?
I see no reason for rebranding. I suppose "produced in the UK" would cover it adequately for export purposes. I see no problems with Scottish or Welsh products being labelled ás such.

Unfortunately, I think the "United" part of the United Kingdom has come under considerable pressure from......? ....... whoever it is that likes to stir up trouble and division. I also feel like we are not unique in that regard and am quite sad that so many have fallen for the division game.

posted on Mar, 26 2021 @ 11:20 AM
link
I saw a very good programme on the BBC a few years back, which effectively played out a scenario where by the Russians invaded Estonia or Latvia (I can’t remember which) and as it is a NATO country the west were duty bound to come to their aid. There was a control room and there were around 6 diplomatic and military experts advising on what the response should be.

Long story short, the Russians ended up firing an ICBM at London, our Nuclear submarines were in the Baltic and fully ready to fire a retaliatory Nuclear missile. The response from the control room was not to bother firing as it was just too late to help London, London was gone, and it was pointless in killing hundreds of thousands of Russian civilians.

In conclusion, unless you are going to use them to strike first, then they will never be used. I can’t see any scenarios whereby a British Prime Minister would ever use nuclear weapons to strike first, so what is the real point in having them? I have heard and listened to the deterrent argument, but Germany doesn’t have them, so that is a poor reason IMO.

I'm in Glasgow Lysergic, Faslane(HMNB Clyde) is just up the road.

And somewhat of a prime target, given what the place does, and what's stored there.

We would be vaporised in the blast wave, and/or cooked/receive a lethal dose of radiation.

I don't think any mask would suffice, x2 or otherwise, no matter how fast we managed to duck and cover.
edit on 26-3-2021 by andy06shake because: (no reason given)

Scare the # right out your Breeks, and that was back in the 80s.

We don't fair well in any sort of nuclear exchange.

Even back when we were in primary school "When The Wind Blows" perfectly illustrated the futility of nuclear war.
edit on 26-3-2021 by andy06shake because: (no reason given)

posted on Mar, 26 2021 @ 04:40 PM
link
a reply to: djz3ro
Ah, like the containers coming into Grangemouth full of Brazilian Beef. The labels ripped of and Produced in Scotland labels. stuck on?

The policy of nuclear deterrence fails if it is employed. Do the UK political and military decision-makers have the will to use nuclear weapons? If Russia and China concluded the answer to that question is no, then the chances of global (conventional ) increase markedly.

The wildcard is North Korea's nuclear weapon EMP weapons capabilities. These nukes are potentially first strike or tactical battlefield weapons. The decline of MAD sees a renewed focus on conventional military deterrence and the supporting logistics frameworks. Increasing the size of the UK's nuclear weapons arsenal doesn't compensate for the shirking Army, RAF and undersized RN. 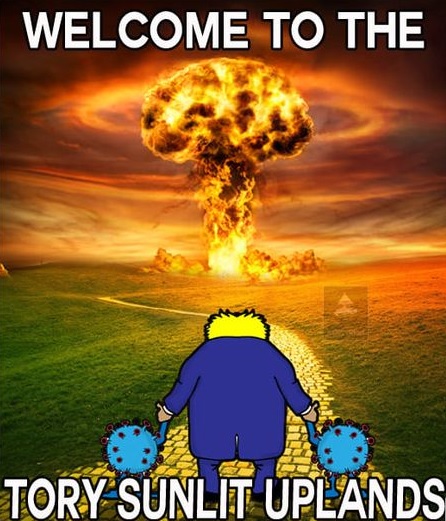 originally posted by: Grenade
a reply to: redchad

Nuclear War has no winners, except maybe flies, rats and cockroaches.

How many nuclear wars (no need to capitalize this, by the way) have you lived through?

My point is, that 'nuclear war' doesn't exist, except as an idea. It's not real, it has never happened. So you can't really know anything real about it - you can only write conjecture, just like the rest of us.

There's not that much proof that nuclear bombs even exist - and that 'proof' is highly dubious. The CLAIMS about what 'nuclear bombs' do, do not correlate with facts or realities of alleged nuclear bomb detonation sites.

The nuclear bombs are supposed to wipe away all buildings and trees and such with that extreme heat and blast waves - but if you look at photos of Hiroshima and Nagasaki after the alleged nuclear boming, the results are 100% identical to Tōkyō photos after FIREBOMBING.

You can clearly see buildings and ruins still standing, as well as multiple trees standing up.

And all the biologically impossible nonsense, like 'eyes melting', has not been proven to ever have actually happened. Or your shadow somehow being imprinted on a structure, etc.

The more you research this whole 'nuclear bomb' stuff, the more peculiar implausibilities and unproven 'horror story'-like claims and details you are going to find. It's all very weird.

Then you look at the 'convincing video evidence', and it looks like someone just points their camera at a sunset or regular bombing, and the clouds are apparently 100% unaffected by 'the most powerful weapon in existence'.. they don't move or get disturbed at all by a nuclear bomb amidst them.

When you look at all that and realize just how unconvincing it actually is (and how most of those 'nuclear explosions' so expertly captured on camera although it's supposed to be a devastating bomb that wipes off everything around it, and so bright, no film could contain that kind of bright light without over-exposure have some suspicious groups of 'smoke lines' next to them so often)... well, one has to wonder: is there ANY actual proof of existence of nuclear bombs?

Consequently, you might start asking, is there ANY actual proof of possibility of nuclear war, if the existence of nuclear bombs is even slightly questionable?

The governments have EVERY incentive to lie to the masses, so the official stories should never be believed without a good reason to do so. (Fear is not a good reason)

The official story about nuclear bombs don't seem to hold water very well, but the claim of existence of such of course benefits TPTB. Also, it gives a GREAT story to keep masses in fear; "Nuclear war ALMOST started several times, but thankfully, this brave blahblah stopped it!" and everyone gives a silent thank you in their minds to this brave warrior that didn't start a war.

It's such a juicy narrative, you would have to wonder; even if nuclear bombs and everything about the official story about them is 100% true, would all this NOT have been fabricated, if it wasn't true? It's just such a perfect story; weapons SO powerful they can never be shown to the world, so their existence can never be proved, but look, we destroyed japanese cities so many decades ago that camera tech could only give grainy, lores, unfocused, unbelievable-looking crap as proof, but believe us anyway...

It's the perfect lie; the most powerful weapons whose existence can never be proved. If you were a 'world leader', wouldn't you want people thinking you have such weapons, even if you didn't?

Just asking.. I don't really know. For all I know, they could be just as real as our whole physical reality.. (then again, researching THAT all the way to the sub-atomic level and taking into account higher levels of existence makes things seem a bit shaky)

But I am just pointing out, that the lie.. eh, STORY itself, makes proving of the story impossible, so none of us can truly REALLY know whether those things exist or not, and thus, without living through an actual nuclear war (like some japanese guy lived through both of the supposed 'nuclear explosions', and how there's not much radiation nowadays in Nagasaki OR Hiroshima, although they were SUPPOSED to be super radioactive for thousands of years, and animals and plantlife even in Chernobyl is doing phenomenally well., although that was also not supposed to be possible)..

..so please refrain from making such absolute statements of things that may not even exist, ok?

Are you also a flat earther and creationist by any chance?

Even if what you said is true - it isn't but for arguments sake I'll go along with it - then in this instance I'm glad they've lied about this - which they haven't - and carried out this great conspiracy involving pretty much every single physics and chemistry student/graduate because the fear of nuclear war - no capital letters - and M.A.D. has prevented countless wars post-1945 and thus probably saved millions of lives.