page: 1
57
<<   2  3  4 >>
log in
join
share:
DontTreadOnMe
+21 more
posted on Mar, 17 2021 @ 06:15 PM
link
I saw this earlier this morning and figured it was just more of the bizarre stuff coming out of Biden's mouth. He is one arrogant SOB.
But then I remembered that Putin is the leader of a rather large country that used to be our biggest foe during the Cold War.
I mean.....here's the thread about their Russian Ambassador being recalled.....Russia recalls its U.S. ambassador

And I was going to do this the more diplomatic route, but someone posted here....Biden believes Putin is a killer. Vows Russian leader 'will pay a price'.

So here we are....in the Mud Pit.
NYP article


In an interview Wednesday, President Biden said he believes President Vladimir Putin is “a killer,” vowing that the Russian would “pay a price” for his US election meddling efforts.

The commander-in-chief made the remarks to ABC’s “Good Morning America” after being asked about a report from the office of the Director of National Intelligence that implicated the Kremlin in efforts to undermine US elections and divide American society.

What?
Huh?
This isn't some town hall rally where the candidate can talk down to an American citizen. This isn't some press event where the Resident-in-Chief can blow off the media, and the media takes it.
This is Biden threatening a foreign Head of State.
What was he thinking?
We don't even have to go into the fact that Biden's mental capacity is diminished. This is just crazy. Is he going to call out Pres. Xi next?
How about calling out Pres. Macron for his remarks about wokeness?

edit on Wed Mar 17 2021 by DontTreadOnMe because: (no reason given)

I read that the leftrads want$2k a month stimulus checks, plus wiping out student debt....Venezuela anyone?

Gothmog
+3 more
posted on Mar, 17 2021 @ 06:41 PM
link
I have played all the Fallout game series and the Wateland series an awful lot .
Enjoyable games all.
Never expected I would have to live them.
Thinking back , was that "training material" for me ?

And with the military in this country being in the process of getting "woke"....whoever ends up wanting to take over here will pretty much be able to just walk right in.

In an interview Wednesday, President Biden said he believes President Vladimir Putin is “a killer,” vowing that the Russian would “pay a price” for his US election meddling efforts.

The commander-in-chief made the remarks to ABC’s “Good Morning America” after being asked about a report from the office of the Director of National Intelligence that implicated the Kremlin in efforts to undermine US elections and divide American society.

Aaaannd that's why Biden shouldn't be allowed to speak without a teleprompter.

posted on Mar, 17 2021 @ 08:15 PM
link
The true BS from Biden will be exposed when we see how the current sanctions are handled (assuming they haven't been secretly reversed by now). The Sanctions were Trump's policies afterall right ? 👁️😎👁️

posted on Mar, 17 2021 @ 08:18 PM
link
Right now it’s just badly chosen words, but I guarantee you that if and when he does something to make them “pay the price” it’s not going to be a good outcome. The left and woke idiots thought Trump was going to start ww3, no, the flipping idiot they voted for is going to. We are in very scary times.

I think you may have too much faith in Jao Bai Den's understanding of how to speak from a teleprompter.

posted on Mar, 17 2021 @ 09:12 PM
link
Biden sounds like an old Saturday morning cartoon villain on Scooby-Doo. Did he whisper this threat for effect? what a douche nozzle...


This is Biden threatening a foreign Head of State.
What was he thinking?

posted on Mar, 17 2021 @ 09:27 PM
link
To think he's got control of the US nuclear arsenal.
I hope he understands mutually assured destruction.
Stick to sorting out Corn Pop,dottled old fool.

Some people may not even exist !!

Edit: After slapping Biden he also needs to shout “I demand satisfaction!” In his best British accent.
edit on 17-3-2021 by Brotherman because: (no reason given)

posted on Mar, 17 2021 @ 09:41 PM
link
a reply to: DontTreadOnMe
And, once again, this guy is swinging for the fences. While he was campaigning, he was just dangerous to himself, and probably young girls, now... Now, well, everyone is in danger. Either he is totally in on it, along with everyone else on his team, or the whole lot is incompetent. This has seriously got to stop. I don't know how long they drag this out. Make DC the new traitor colony. Which seems obvious as ever.

Don't know what else you can say.

posted on Mar, 17 2021 @ 10:02 PM
link
a reply to: VictorVonDoom
Amen, brother, amen!
I think there must be times when he insists on going it alone, outside the many scripted appearances/interviews he must perform.

biden's grasp of foreign policy is woefully off.
But then his grasp of what is good domestically is non-existent. 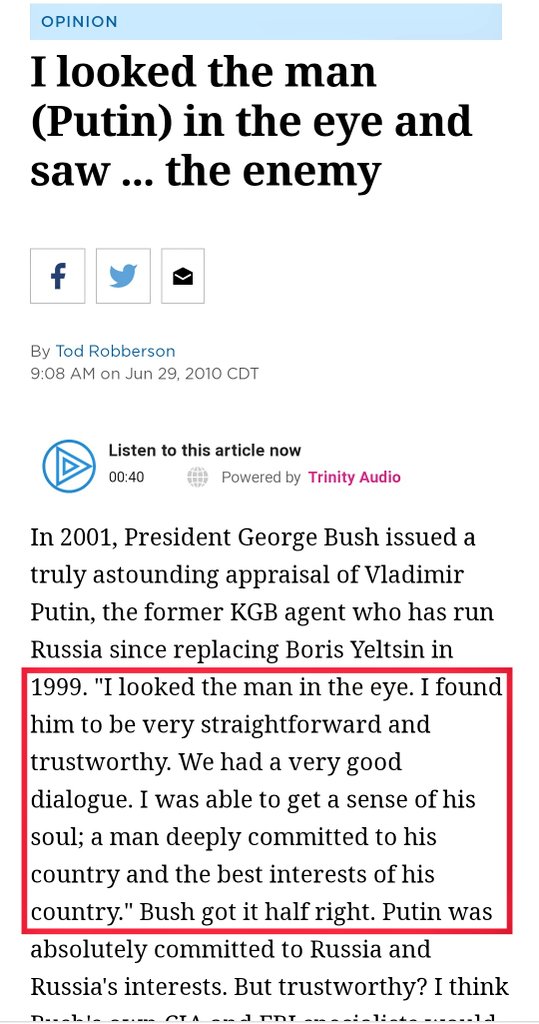 For the Dem hyenas, Russia is the scapegoat for everything and only getting worse. Keep pokin the bear and one day it's going to bite, hard & fast. Putin and many other Geo-political leaders know full well that Biden is a pathetic fool.